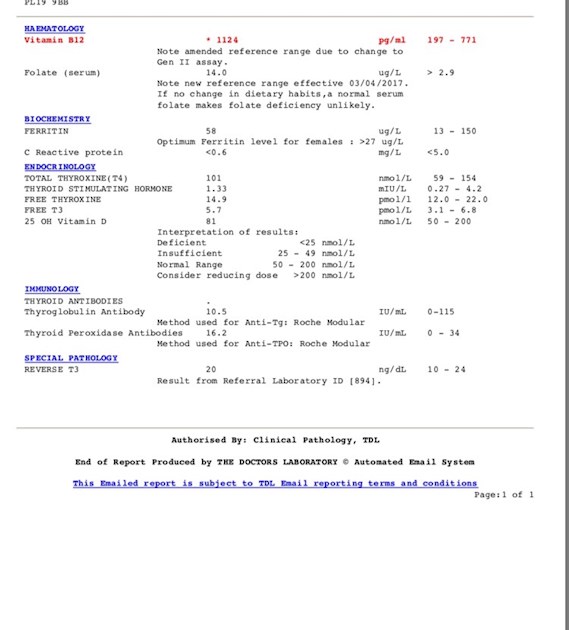 Hi I'm new and been reading over a lot of posts, you all seem so knowledgeable and have had your own struggles. I've been trying to pluck up courage to post for some help...

I've had close to all symptoms of hypothyroidism for 15years. I had my first test 14 years ago, a temporary GP said my results were borderline and gave me medication (can't remember what it was), stupidly I stopped taking it after a week or so because I was young and didn't understand that it wouldn't make me instantly better.

A few weeks ago I had tests done with Blue Horizon. The doctors comments only mentioned high b12 levels, so it looks like everything are in normal ranges. I'm so confused because I'm suffering every day, as soon as I come in from work I have to sleep. I don't know what to do next.

The only thing that really jumps is the B12. Are you on supplements? Thyroid panels aren’t really abnormal.

Vllb in reply to Puska

Thanks for the speedy reply. I occasionally take supplements but not regularly enough for my b12 to be that high. I drink a lot of milk, so I'm guessing it's got to be that. I've cut down after seeing my results, they shocked me

Gambit62 in reply to Vllb

what is the strength of the supplements you take? Unless you have an absorption problem you need very little B12 and I wouldn't recommend supplements of more than 50mcg. If you are taking 1000mcg that is a large dose for someone who doesn't have an absorption problem and could result in levels being elevated as above. Unfortunately some people respond to high levels of B12 in their blood by shutting down the mechanism that allows the B12 to move from your blood to your cells so it can lead to a functional B12 deficiency.

Treepie in reply to Gambit62

Interesting last sentence as previous posts on B12 suggested excess is not a problem as it is excreted.

But I think there can be some side effects such as itching.

Gambit62 in reply to Treepie

functional B12 deficiency - the result of the response mentioned is common enough for the symptoms of B12 deficiency to be recognised as a symptom of raised B12 levels caused by conditions such as damage to the liver and kidneys that lead to elevated B12 levels. The reaction also seems to result in B12 being retained in blood longer than would otherwise be the case.

It is true that high levels of B12 are not toxic but it is, unfortunately, not true that all excess is just excreted in urine (though most will be) or that there aren't any potential complications from raising B12 levels in serum. In any secretion will take time.

An effective way of treating functional B12 deficiency is to increase B12 levels further until enough starts to get through to cells but I'd rather avoid people having to do this by not advising them to supplement with ridiculous levels of B12 unless they genuinely have an absorption problem.

Itching is a potential side effect of high B12 levels as well - and in some cases it can result in very bad acne for some people who are being treated for absorption problems - though in most cases this does resolve.

Vllb in reply to patgbreen

Thank you, I'll see if I can find out a bit of information on them.

Treepie in reply to Vllb

I had sleep apnoea but that occurs at night when for a short while your breathing stops.It is a hypo symptom if that is happening to you it could explain fatigue in late afternoon.

What time of day did you have the blood drawn?

Your bloods look ok apart from B12.

Ferritin could be a bit higher, eating liver once a week would help

Vitamin D, supplementing through winter (oct-April) at 1000iu as Government advise, will bring level up a bit. Around 100nmol is ideal

You should retest in March and Sept - vitamindtest.org.uk -£28 postal kit

You could try taking a vitamin B complex. If you are low in one of the other B's this could be the reason

Your FT4 is on the low side at 14, suggests possible slight thyroid issues

You could try gluten free diet for few weeks

Sleep apnea is much more common that people realise too

You don't say how old you are, or if female or male.

What are you taking and what dosage? T3 (liothyronine), T4 (thyroxine) or both? How long have you been taking them?

morning everyone, I've just received my latest blood results. Could someone please have a look and...

put weight on. I went to the doctor's and had TSH and FT4 tested:

I get some test from NHS however they are within range...

I've had such great advice here in the past, and have just got a set of results that I...

Just had a recent blood test done about my thyroid with thriva, was hoping someone could help me...

This is a good example of what present accepted assumptions ...

The Medical Field: Why student doctors are getting out on fa...