Another bike ride today: I went on... - Positive Wellbein... 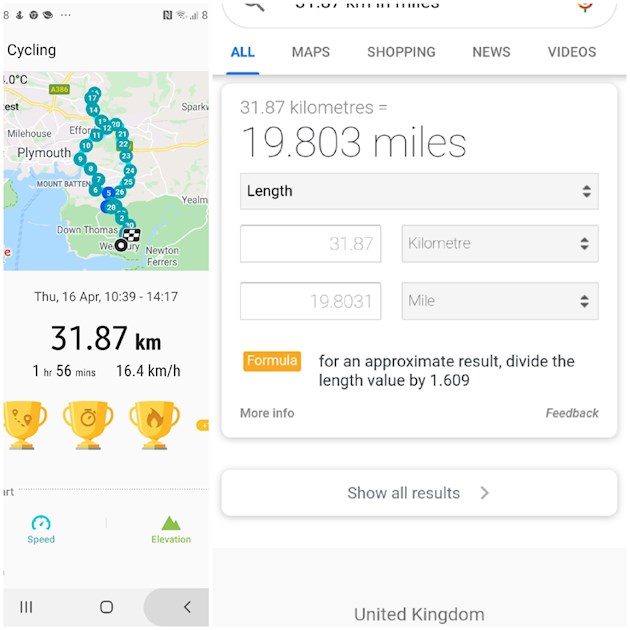 I went on another ride today, I popped to a friends house (we were talking out in her front garden a long way from each other), she is a Celiac so I was giving her the flour I wasn't going to use and tea bags that I'd just bought and didn't realise I couldn't drink.

I came back the long way round and cycled nearly 20 miles, it's going to be hard keeping this up indoors when it's raining.

Thank you Jerry and she was thrilled. I switched between do I walk or ride so the bike won.😉

Yes it certainly would have looked odd but you see more and more people doing it. We really do miss each other but having a chat was really good as it was face to face from a distance rather than the phone.

I'll go stir crazy if I dont do anything, if you done use what you have you'll lose it so I make the most of it🤣.

Have a lovely evening as well Jerry.

It really was, it's easy to do it safely. It's been stunning again, it was windy though so maybe burning double the calories with a head wind.🤣xx

That sounds like a great ride with a reward by safely catching up with a friend. Let's hope there won't be too much rain to keep you in!

It was and so lovely to see my friend. Even though you can't sit and have a coffee together its still lovely to catch up from a distance.

The rain has eased off and it's supposed to be drier for a time later so I'll go out for a quick jog but won't venture too far as I dont want to get soaked.

Have a good day.

I cycled just a shade under 32 miles.

today and decided to cycle somewhere completely different so thought I would cycle to my local farm...

the long way round again but couldn't take any photos as it was starting to rain. Fortunately I only

most of the dry weather and enjoying it, I cycled 25.370 miles today which was lovely. We've got...

difficult cycling with a head wind.

Some photos tomorrow, I promise.

I cycled just over 19 miles.