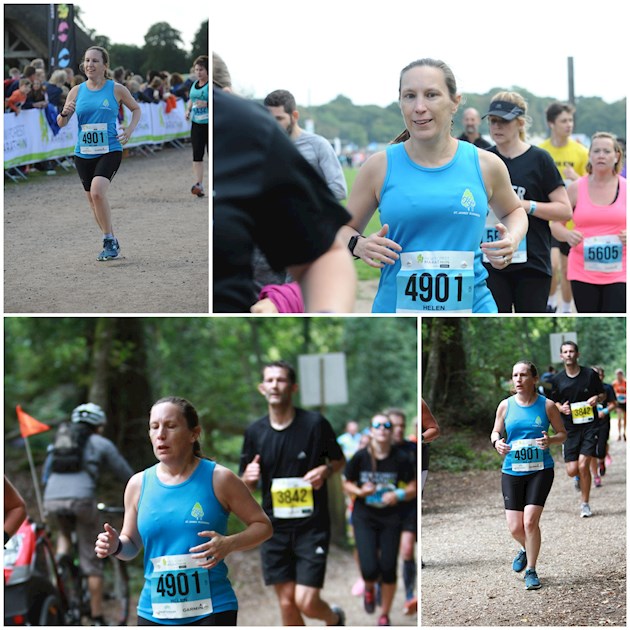 Last Sunday I set out early with the family to the new forest showground. One road in and out made for a bit of congestion but we set out with plenty of time. Once parked it was a short walk to the race village to see the marathoners heading out. I met a couple of ladies from run club and we chatted whilst watching the half marathoners start. I was a bit envious as I would like to have done the half but I have never run a trail event before. Last year it was an absolute bog, a contrast to this year's dry hot summer! Loo trips done surprisingly quickly and we were in the start pen for warm up. Then the start was in waves of super fast, fast, moderate and walkers. We three decided out time fitted the moderate and we were off. The start went out of the show ground and straight into trails. It was slow going as we had to weave and dodge slow runners and walkers in the first mile, really walkers this early on!?!? This did slow our time as ideally myself and friend were hoping to come in just under 60 mins if possible, my pb was 61 before. After a mile we got into our stride with some space to move on the trails. The scenery was stunning. They had some fab signs of motivation along the way which made us laugh. At varying points there were junctions and we had to check which colour we were following (hint check bib colour 😂) and which way the arrow was. The marshals were really helpful too. By 6km in, over halfway, I was feeling good but my run buddy was finding the pace hard. I stayed with her a little longer but she insisted I went ahead. I felt guilty and she felt bad but we had agreed (I thought she would be ahead of me!). I latched onto a hm chap to pace me for a bit and off I went. The trails were really nice, compacted small gravel or woodland. At another junction my hm man went off along the road whilst I went back through the woods. At this point I heard galloping and all of a sudden there were about 20 wild ponies running alongside us running through the trees. It was a magical moment, amazing! I kept up with a couple in front who were pacing nicely. Then we were upon another major junction with confusion caused by a family of cyclists aiming at the runners and signage to read. Unfortunately I was squinting at the signs just as the camera snapped me, doh! Oh well, off we went through the polo club land which was grass, I hate running on grass as too many rubbish school cross country memories. I dug deep and kept my pace over the grass before reaching the showground again. The finish was in sight, my kids were shouting and cheering so my legs found some energy for a sprint finish! My finish photo was jubilant with my kids in the background. As soon as I crossed the finish line my breathing went raggedy, almost panicky. This has happened to me twice since my brother died of an MI following exercise exertion. I am not sure why but I made myself relax as i collected water and my medal and it improved. My time was 62.40min. Sadly not a pb but that may be due to the first mile congestion. That was my first trail event and I did really enjoy it although I didn't know the route or where we were going. What I noted was that on the trails we just heard crunching underfoot and the woodland paths were just so quiet, not like road events at all. My run buddy came in just a couple of minutes later and our other friend a little after. It was a really well organised event.

Wow congrats!!!! Sounds fabulous. My first 10k in Bournemouth next month. I will take inspiration from your race report. 😊

I was a bit nervous about trail, I have done a road 10k before. It was really good and after I finished it was lovely to sit on the grass having a picnic lunch with the family watching the others come in. The Bournemouth 10k is a flat course, well supported, so you will have a fab time!

Ripcurlrana71Half Marathon in reply to

Thanks it’s my hometown and running route. Just hoping for cooler weather! 🤞😬

Wow. Sounds like it was a great event! You didn't post your run data to Strava? Great time over trails!

in reply to Lordi

Yes run data is on Strava, I had a pb for the route and it was my second fastest 10k, happy with that considering!!

in reply to Lordi

Yes, I was a bit late posting!!

You will probably always think of your beloved brother at every race you finish. That’s ok as it sort of puts you in touch doesn’t it 😢. He would be very proud of his sister I know that 😃💪🏃‍♀️👍🏅

Thanks miss wobble, you made my eyes a little moist there. It is always in the back of my mind when I run, I just can't shake it off. Maybe in time....

Well done runfasterdoyle - fab time for a trail 10k. How lovely to be accompanied by the ponies too! 🙂

in reply to Sandraj39

The ponies were awesome and an absolute highlight of the run. It is a memory that will continue to put a smile on my face!

Well done on the race and getting a fast time on this trail run! I also found my 10k trail race a little slower than my pb at the time. All the hills I suppose.

in reply to Decker

That's interesting, I put it down to the congestion and different surfaces. I was running in road trainers as I don't have trail ones, at times I lost some traction. It was fun though not knowing where I was going!

Yeah, it’s probably a combination of things that factor in. I also have road shoes only. I want to join a trail group but it conflicts with my Saturday road group. Not willing to give that up just yet

in reply to Decker

Ah you were made for the Saturday group, you always seem to have such fun adventures!

Yes 😊And this Saturday is an autumnal equinox sunrise run at 6:30am! I’ve no idea where we are running to.

Oh well done Helen! I was there last year and found it the same with the congestion initially. But it is pretty and it's lovely to see the ponies!hopefully it's given you a taste for trail running!😊x

in reply to aliboo70

I would do it again that's for sure. Have you done the new forest hm? I may be interested for next year 🤗

aliboo70Half Marathon in reply to

Yes that's the race I did last year and my brother did the marathon. It was good 😊

in reply to Whatsapp

Yes I agree, run reports are fab and fuel my need to keep something in the diary!

Great run, well done! Sounds like a lovely place to run, is it hilly? Might consider it for next year, I love the New Forest

It wasn't very hilly and is listed as flat. I think the half and full had some more inclines but not massive.

It sounds like some sort of amazing hallucination, with all the ponies! Wow, what a lovely place to run, I'm super envious 😍

New Forest Half Marathon. Got the T shirt.

Garmin virtual pacer for my target pace and stuck with it. As the miles went on I got a minute or...

a sell out so it was a bit cramped at the start. I was in the queue for the lavs and had to run...

Madge’s report from the Cambridge Town and Gown 10k

course 1hr 08, 2 mins off last years time, caught up with a few parkrun buddies on the way round...

A bit late posting but I did 10 miles!

finally made it back up to 10 miles on Friday! Last week I postponed my long run from Weds due to...