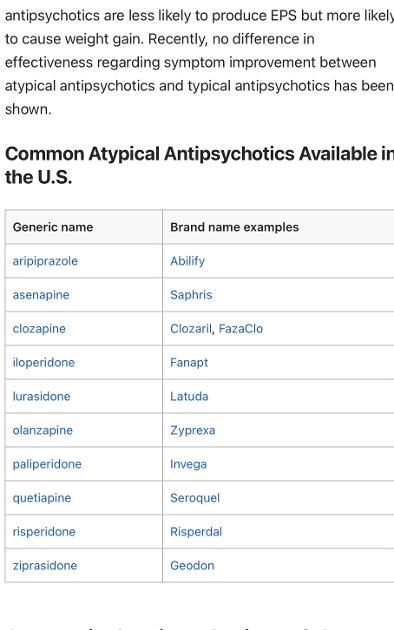 I want to say that some of you Parkies might do a little research on the other drugs you are taking.

That might be certain drugs that are called “Atypical antipsychotics”

Here is a list of just a few other common drugs in that list. I hope this may help a few of you.

There are also some other type of drugs that can cause it. Some of those are inhaler’s, bladder meds, and I am sure even more after that. If you are able to get off those drugs, it might be the cure all you are searching for.

BS-ZIG
To view profiles and participate in discussions please or .
Read more about...
9 Replies
•

Hubby’s short stint on 1/4 of a quetiapine per night along with excess levodopa had him almost completely disabled. Now he’s off it again and back on his full dose of Hardys DEN and restore gold he is feeling great again. I just sent him off to buy groceries. The first time in 2 years!

Wow, good for you and your husband! What is Hardy’s DEN? I am curious.

They look expensive I know but there are so many things in it I found it replaced a whole lot of other things he had been taking. He takes 4x 3 per day which is the clinical dose. They have just finished trials in nz for using it in ADHD kids and I think some of the brain chemistry there is similar to hubby’s anxiety .

You need to get sign off by a doctor to take it because if you are on antidepressants you need to do a controlled reduction of those as you heal as you will be over medicated otherwise.

As he increased it back up at the same time as restore gold I’m not sure which helped the most but they complement each other well with their ingredients.

I do not think I would like to take that. I already take most of this stuff in supplements. I am happy with what I take, along with a Gundry Product that is great. But thanks for telling me about it.If your husband is feeling better, then that is really good. Good luck!

Yes you don’t want to double up. He was taking lots of things individually at first but I just found this easier and the individual products didn’t work for him.

Yes, the supplements are a pain to keep ahead of. But worth it. Has your husband ever had a PET scan. I had one many years ago and it confirmed what the doctor told me that I did not have Parkinsons. It was the drugs I was taking. So now I have finally quit my Sinemet and I will know better before I take anything else. Good lesson learned here.

No they don’t do those here? He had an MRI to rule out other things. He seems not to tolerate much levodopa and it makes him worse at anything but small doses so it is something I wonder about. I personally think the mirtazapine started it off as it made him so lethargic he wouldn’t move. He did have the anxiety and depression before that but that seems to be controlled with the diet changes and Hardys.

What are the signs that Parkinson's is getting worse?

Eventually, Parkinson disease symptoms get worse and include:

All of these were caused by medications in him except the depression and weight loss that he had. Decreasing the levodopa and getting rid of antidepressants got rid of these again.

chartist in reply to LAJ123457 months ago

I am very glad to hear that you were finally able to get to the bottom of your husbands sudden decline and get it resolved with your husband back on the right track!

LAJ12345 in reply to chartist7 months ago

Thanks Art, again it’s very miraculous and quite dramatic and I’m now fairly sure it’s the Hardys, and was probably decreasing the Hardys that made him get worse again in the first place. It just always seems to be a factor when he improves.

an experimental drug that is significant for PD treatment \\" A large team of researchers from...

believe we are attacking the two root causes of PD with our drug therapy, namely, by regenerating...

experienced the same,could you please share your experience and let me know if anything drugs or...

Has anyone come across any research that they could share regarding the deterioration of eyesight...