Finger nail fungus: So I guess I will start from... - CLL Support 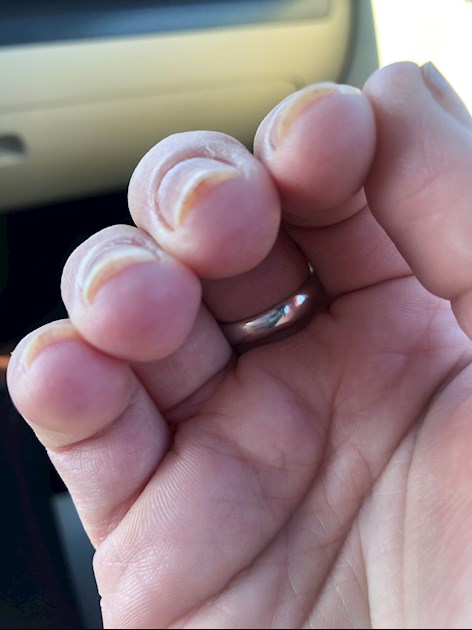 So I guess I will start from the beginning of this journey. Let’s start off with saying I have always taken great care of my nails so this experience has been pretty traumatic for me. About 2 months ago I was starting the weed whip to trim up the grass and the top snapped back at me and hit my nails pretty hard on my right hand and sending up slicing underneath my pointer finger. I went inside washed my hands from the blood and went back outside. About a week later after the cut was almost healed my nails starting burning and itching and were sensitive to touch on both hands. I was started soaking them with soap and hot water cause it seemed to ease the pain a little. Than all of my nails split from the nail bed. I have healed up the slits but now between my nail and the bed there is spongy looking skin which I believe to be a fungus. I have been using antifungal cream and doing apple cider vinegar soaks and haven’t seen much improvement. Has this happened to anyone else? Any suggestions on how to speed up this process of healing? Thanks in advance

I haven’t seen your problem but my toe nails have white fungus on the nail beds. It goes away if I rub Vicks Vaporub into the nails for a few days. This is actually a proven remedy that helps some but not all people with that particular fungus. You may find a definitive answer from a podiatrist. You may not even have a fungus and your home remedies may notq be helpful. Perhaps there is a free clinic you could access. Are you in the U.S.? Sincerely, MsChief

Do you have CLL?

Some treatments like Imbruvica (ibrutinib) and Zydelig (idelalisib) cause nail issues, its quite common. In my case the nail beds grew out with the nails, so I could not clip my nails without clipping the nail bed and causing bleeding and pain..

I suggest you consult your doctor, for a proper diagnosis, and go from there.

Yesterday I was prescribed some polish called Jublia

Wow!! Post it again if it helps. I saw my doc who does the laser. Hmm he

seemed quite please that the nail had grown out 1/32th (if that much). It’s

I had a fungus on my nails a few years ago. I believe it might have been caused by bacteria in a locker room in a gym or in a swimming pool. I remember it pushed my nails out. I went to my GP and eventually got referred to a dermatologist, who prescribed Flucanazole? and after about 6 weeks it went away.

Firstget your nails assessed to ensure it is a fungus. The doctor can give you a kit to use to clip your nails and then they will send them for assessment. If in fact it’s a fungus there are a couple of options that are most effective. They can use lamisil orally and/or topically. They can have you try penlac or most recently laser treatments. None of these options are cheap but over the counter and natural treatments don’t work. Laser is very effective.

Lamisil works but can have health effects.

I have read in the newspaper that soaking nails in Listerine will kill a nail fungus - if that is what it is. I've never tried it and it said it had to be the original Listerine - the brown one - for it to work. I don't know how many or how long it takes for it to resolve but it would be worth trying.

Another excellent topical fungicide is Head and Shoulders dandruff shampoo (zinc pyrithione)... My football coach used to tell us to use it for jock itch... apparently it worked... 🏈🏈

Whether it works for fingers nails I have no idea, but might try it... as a soak

Obvious a doctor's consultation would be the best option...

Could be the alcohol in it.

Try soaking your nails in bicarbonate of soda..

I had fungus in my big toe. Treatment from podiatrist was to dose with t tree oil everyday after shower. Takes a while but it worked for me.

Hello I would like a little input about a toe nail fungus I have had for about a year and a half.I...

I noticed my hands and skin around my nails were soft and looked normal again. I started taking...

Want to know if anyone has acrylic nails to help the splitting nails I have been reading about. I...

felt better than I have in the last 10 years. My nails, however, seem to have stopped growing and...

Low Levels of IgA, IgG and IgM - What Triggers IGIV?