Rabbit Rabbit Protocol Please: First of all this... - PMRGCAuk 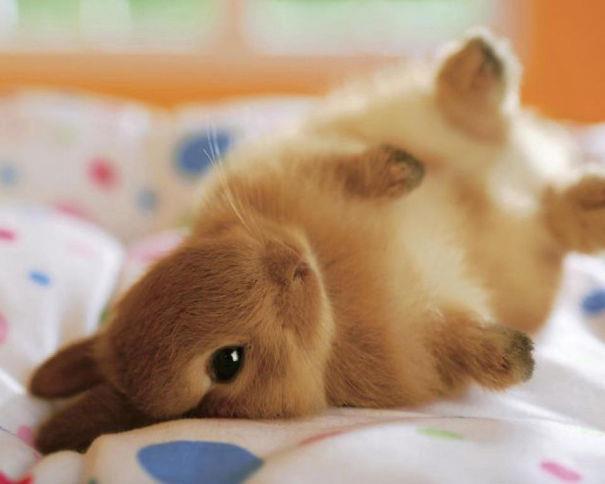 First of all this little guy is what I look like in the morning as I’m trying to figure out what hurts and what is okay to move before attempting to get out of bed. In my case it can take me 10 to 30 minutes to decide on the safest way to get up but hey, I’m getting up so that’s a great thing! Right?

Ok down to business. I want to know if it counts if you say Rabbit Rabbit for good luck at the stroke of midnight or do you have to say it when you actually wake up? A cohort of mine who is a pilot evaluator from the UK swears by this superstition (we’re all a superstitious lot by nature) and when I remember it does seem to work. Nitrobunny was a name given to me by a USN Admiral and I won’t bore you with the details but I ran with it years ago and always loved rabbits. Regardless, it’s just cute to start a month with rabbits. I guess if you forget you’re supposed to say Black Rabbit or Tibbar right before you go to sleep. I know it’s not scientifically relevant but if anyone knows the protocol and history behind this, I’d love to know. Happy New Year wishing everyone health and happiness in the coming year 2019! Love to all~

Never heard of it over here in UK - in fact in some places is definitely not okay to say the R word - dates back to when stone quarries and or tin mines were very common. The men working down them were always worried that the little furry things would excavate underground and cause the tunnels to collapse, and kill someone.

In fact you take your life in your hands if you even mention the R word in certain places! 😳 Very UNlucky indeed.

There seems to be a lot of fuss about the recent TV version of Watership Down not being bloody enough!

Just downloaded it actually to catch up!

I thought the rabbits looked a bit plasticky!

Yes they did, and very ponderous considering they were supposed to be running for their lives most of the time. Found it rather disappointing.

I won’t watch it on catch-up in that case!

but I am a countrywoman, and I knows what rabbits should look like🐇🐇🐇

I remember my father shooting them from the bedroom window. I used to help my mother skin them. That is until myxomatosis came along, what a horrible disease. I did see the trailer and was not impressed by the plasticky bunnies.

Used to be a staple back in the day before myxxy came along, and although hubby was a gamekeeper and/or a rough shooter we never really fancied them much after that - there always seemed to be a pheasant or a duck available then!

Can remember my mum cooking jugged hare as well - too strong a flavour for me though.

Not very PC nowadays, but times were different then!

My father loved jugged hare. We used to go to the Lyggon Arms in Broadway and he always had it. My mother never made it. As soon as my mother discovered the Vestas range she stopped cooking proper food most of the time. I still shudder as Vesta Beef curry and the Chinese one.

Yes, they were a bit special weren’t they! A forerunner of pot noodles! 😳

It’s so confusing as I was born in the Southwest US and never heard of such a thing. If you look online it says it’s a UK and North America thing but like you, I also know of many across the pond who never heard of it either. I don’t see how it can originate from both places. That doesn’t make sense either. Somewhere out there is the real origin but I have asked those questions for years and never found a real answer.

No, strictly UK! In my youth It used to be that you say 'hares' at the top of the stairs, then walk down backwards and say 'white rabbits' at the bottom!!!

I'm from the UK and I always say it. Always have!

Must be from differing parts of UK - like ChrisMcT we always said “pinch, punch, first of the month”!

I’ve said “rabbit, rabbit, rabbit” for as long as I can remember as soon as I wake up in the morning (before another word is uttered...) on the first day of every month.

I thought my father had taught me to do this, as he was very superstitious. But he said he had never said it. my mother also denied knowing about it.

So no idea where I learned it. But my children and grandchildren all carry on the tradition.

I swear by it!

Heavens, imagine if I hadn’t said it first thing in 2018! Who knows what (in addition to PMR I might have picked up!

May the rabbits be with you all!!

Love the picture. I'm in the US and have never heard of that. My Bunny Millie joins me in bed sometimes in the morning and that makes for a nice start of the day. I have just started splitting doses again. 3 at bedtime and 5 when I get up. I have a much better morning and don't waste 2 hours waiting to feel better. I do usually wake early morning and lie there an hour before going back to sleep but all in all its better.

Splitting the dose definitely helps doesn’t it? I love the thought of bunny snuggles 💕 we had several bunnies as children and we just adored them.

We say White Rabbits on the 1st of every month for Good Luck, it has to be the first thing you say or it doesn’t work!

I’ve done that all my life (63years) so not going to change it now!

Absolutely love. Cheers to a healthy new year. Going to make this my new mantra

In the UK we say pinch punch first of the month, you have to get it in quick and hard to a sibling, then run out of the way before they pinch and a kick for being so quick!

1st of the month as far as I remember my supersticious friend telling me ,mind you that would start a whole host of other things I don,t have time to do before I go out of the door

Have a good New Year .

White Rabbits 3 times and a wish before any other word is spoken on the 1st of each month. Sometimes I remember, today I forgot!! HAPPY NEW YEAR YEAR EVERYONE.

Happy new year to you.

When I was growing up I was always told by my mum and nan that you had good luck if you said rabbits rabbits rabbits, at the beginning of each month.

This I was told had to be the very first word that you spoke upon waking.

Otherwise it would not work.

You always have to say it three time and always be the first words you speak!!

Ps I love rabbits, I have a Nederland dwarf x

Ha! I woke up this morning, got out of bed, turned around 3 times and said rabbit rabbit rabbit. That is how I learned it. Happy New Year to all. ! And I understand one must do it the first of every month. Although I have noticed (although not scientifically) that if you forget..it is okay!

Nope. Nitro. I've never heard of these rituals!... Chas & Dave had a hit song " Rabbit" over here! But the rabbit...rabbit..rabbit..rabbit...chorus may have been about something different!!!... Happy New Year to you! ATB

That was my point, but I didn’t want to mention both in the same sentence 🤔

Slowdown in reply to Berylholley

I haven't heard that variation: September to April, then .. just like never eating oysters/shellfish when there's an R in the month. Something to do with the cooler months when rabbits are breeding, and oysters can become toxic with summer red algae growth - food related? Nearly always food or procreation reasons! Pragmatic pagans...

Hi. I’m returning to my Gp in 2 wks and want as much evidence as poss as I know she wants to start...

and let’s me know it’s there. Stress causes headache (not a GCA type am relived to say) and fatigue

Please need some Guidance on if GCA is possible?

of my situation and see what any of you think. First I am 50 year old I, female and have been...

Can I beat PMR without farmaceiticals?

What dose Folic Acid are you taking with 20mg Methotrexate?