Raising awareness: I have made my local paper... - My Ovacome 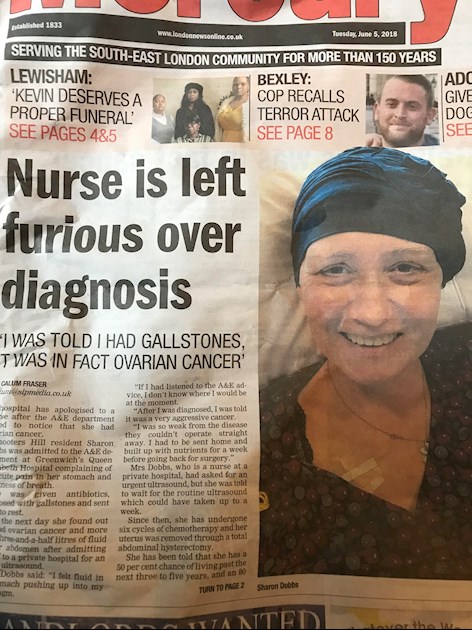 I have made my local paper regarding my visit to a and e last October when I was misdiagnosed and sent home. Want to encourage people to question medics when they dismiss classic signs and symptoms (3.5 litres of ascitic fluid and breathlessness amongst others) and question the decision making process if they are not happy. I am also going to Jeremy Hunt and parliamentary ombudsman.

I think what you are doing is to be applauded, I'm sorry that you are going through this . Sending you a big hug. Kathy xx

Hold on in there, this is disgraceful but get yourself well first and do the awareness later, all the best

Agree with the ladies, get yourself stable first,it’s all unfortunate and it looks like you are not a million miles away from me.

It’s horrible that you are going through this and wish you all the best in your recovery,

Go for it Shaz. Taking action like this is great for our mental health as well as helping raise awareness for others. Thanks for posting what you are doing.

You brave lady doing this. A GP at my practice did a telephone consultation for me shortly before my diagnosis. You have to have a telephone consultation first and the GP decides whether you are ill enough for a face to face appointment. The GP practice already had my ultrasound results which clearly stated things weren't right. Anyway, she diagnosed my ascites as wind and recommended peppermint!!!! I couldn't even do up trousers around my belly. 4 days later I had 4 litres of fluid drained off!!!! My usual GP was furious when I saw him next.

My GP thought that my ascites could be my bowel..The swelling was huge She also said there was no rush and arranged a scan for 6 weeks time. I was in so much pain that I went to A&E.I had a scan immediately and then they drew 6 litres of fluid from my abdomen. There should definitely be more awareness amongst the medical profession!

Cat-33 in reply to mrstadpole

My internist did the same thing at first - had me drink a colonoscopy prep liquid which immediately came back up. Then finally ordered an x-ray, CT and MRI in that order because I am allergic to the iodine contrast in the first two scans and could not have it. And I had three liters of fluid drawn from my abdomen. This was after a year of going to seven doctors who paid no attention to my pleas for help with odd symptoms. Where are the doctors who listen and help when someone who has never been ill comes in with concerns!!!

Good for you! Wish you the best and know this will bring attention to the problem of our hard to diagnose cases...part of it is being ignored!

Good on you! I went to my GP and they told me my bulging tummy was probably the peptac I was having for acid reflux; 10 litres of fluid drained off at A&E 3 days later was actually causing the acid reflux as a result of my melon-sized ovarian cyst, which turned out to be cancerous & was removed via unscheduled hysterectomy.

I later discovered that only 14% of UK GPS have taken the few minutes online training available to alert them to this disease, and requested that mine take it up immediately!

Three GPs in as many days told me my hugely swollen abdomen, breathlessness and severe pain were due to gastroenteritis and I just needed to “ride out the pain”.

Two days later my husband and daughter insisted on taking me to A&E because after googling my symptoms they all matched Ovarian Cancer. A brilliant triage nurse recognized my symptoms and I was fast tracked to Gynae inpatients. There I had 8litres drained from my abdomen and was diagnosed with stage 4 OC and a pulmonary embolism.

I think the GPs decided I was a middle aged, overweight , neurotic woman and this blinded them to the reality of my symptoms .

After a lifetime of anxiety , I feel that too many doctors put all manner of illnesses down to psychosomatic causes - like you I felt they thought overweight menopausal hypochondriac - I presented with hysterical anxiety because I just felt unwell all the time - ok I didn’t have classic symptoms of ovarian c but clearly I was run down and exhausted yet no one did any blood tests or took notice of my saying my periods were weird and I was having spotting and flooding - I’d still have had late diagnosis but I’d have felt that I hadn’t been labelled neurotic

Hi, I was misdiagnosed 6 times by a local general doctor. It's crazy.

When I was first diagnosed I was shocked at how it was missed so many times. It was only caught because I am a nurse and kept pushing saying something was wrong. My work colleagues thought I was turning into a hypochondriac.

When I came onto this forum I thought I would be told I was just unlucky with the drs I had seen.i have been shocked to hear how many women have had their symptoms dismissed. What is worse is the way it is flippantly explained away as ‘one of those unfortunate things’ and we just have to deal with it. When I got a lawyer involved the gynae oncologist who never examined me and never took ca 125 levels told my lawyer I ‘was struggling significantly with my disease’. I want practices changed. Not sure how I am going to do it but I will figure it out somehow.

the lovely Dollysmum, I did an article for my local paper to try to help raise OVC awareness. I...

from my local newspaper this week who are going to use my story this week in both the very local...

returned from Manchester where with the help of the local ROCC we had a stand at the Nursing in...

awareness of ovarian cancer would be to note the signs on the reverse of the letter that calls all...

found it very rewarding and would really like to encourage people if they get the opportunity to...

Should I get a port/ PICC or just hold off?