Hi, my wonderful boy was born by emergency C-section 2 weeks ago exactly, he weighed 9lb (4.07kg). But he was filled with mucus and when that all came out he had lost 10.5% of his weight, on day 3 he was 3.66kg (he was also on IV antibiotics). Now on day 14 he's 3.88kg and for the last 5 days has only been gaining 0.01kg per day. I'm breast feeding exclusively so I looked up all the signs baby is getting enough milk and ticked all the boxes, I know I produce loads. He has never vomited, he feeds every 1 to 3 hours throughout the day/night as well as cluster feeding and has a dirty/wet nappy after almost every meal. His poo looks as it should, his pee is clear, he sleeps contently and is very alert when awake, hardly cries. He is literally perfect, just gaining really slowly. Is this normal? Will the weight gain speed up? The health visitor isn't too concerned at the moment because he is so alert, content and passing all the health tests. But I'm worried they'll start thinking I'm a bad mum or make me give him formula. 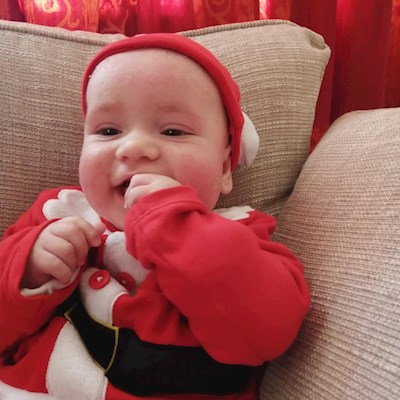 pinkie93
To view profiles and participate in discussions please or .
Read more about...
19 Replies
•

Hi my love... I had a csection too... not that that has anything to do... my baby lost I think 10a% of his weight in the first 2 weeks which I was advised is very normal. As long as he’s gaining and feeding well then baba should be ok. Is he latching on ok? My baby has slight tongue tie which could be a factor too... xx

pinkie93 in reply to destiny121

Thank you for the reassurance. He latches perfectly, I did see a lactation specialist in the first week to check that and she had no concerns. I just mentioned the C-section because apparently babies born that way tend to have more mucus that babies born vaginally and that's why he was on the antibiotics. I am worried that his gut bacteria is insufficient because of the antibiotics we were both on, but his poo looks completely normal.

Hi, C section babies tend to lose more weight initially if they are breast fed because it can take longer for the milk to come in after surgery. I had an emergency section and by day 3 my lb had lost 10.6% of his initial weight. As your baby is gaining weight and having the right amount of wet/dirty nappies then I would just keep going as you are. If the HV becomes concerned they may suggest expressing and feeding from a bottle as well as breastfeeding in the same meal as that’s what the hospital suggested i did, but I doubt they would say you have to give formula, especially if you are producing enough. I would also say that fact he is content after a feed but alert when awake would give me reassurance that things were going ok x

pinkie93 in reply to stephkp

Thank you for the reassurance. I think I'm really concerned because I had a terrible experience recovering in hospital after the C-section. They told me to force feed him formula while he slept after the 3 day weigh in. It was incredibly traumatic, my every move was judged as if I had done something wrong.

stephkp in reply to pinkie93

I had a very similar experience. They never really pushed the formula but my lb would latch and then instantly fall asleep. The midwife said I had to force him to stay awake i.e poke and prod him, blow in his ears, scratch his feet to stimulate him. I had a midwife stand over me whilst I tried, which didn’t work. They would constantly tell me to move him into a position that was really painful for me, having just had major surgery (I’m sure you understand that pain). It was awful. My milk didn’t come in until after the weigh in on day 3. I felt like a complete failure and wanted to just give up and start formula so I could get out of the hospital. I got kept in longer as he lost too much weight. They gave me a feeding plan which was to breastfeed, then express, then feed him the bottled breast milk every 2 hours. The problem with that is that by the time I had done it all he would just have fallen asleep and it would be time to wake him up to start all over again. I ended up just feeding him expressed breast milk as I needed to sleep and it was also less painful. Sometimes i think they forget you are trying your best, and them saying/implying your not doing it right or should top up with formula when your milk hasn’t even come in, adds an extra level of stress that you don’t need. It sounds like your doing all the right things to me.

So so sorry for your experience 😢

Hope that baby is gaining weight beautifuly by now! 🤗

pinkie93 in reply to ChrisWest1983

He is thank you, he grew out of his 0-3 clothes at 7 weeks! Still exclusively breastfed

pinkie93 in reply to ChrisWest1983

How's your little one getting on, my boys got his first round of jabs on Thursday. Time seems to have flown!

We have our 2 month review in the middle of October. She's doing good, gained 2lb3oz in first month, but she was lucky and was back to birth weight on day 4. I agree, she seems so big and grown up already.

I didn’t have a section(I was induced though) but my little boy lost about 10% and was a bit jaundiced. I think it took him just over 2 weeks to regain the weight. He did have a tongue tie which was cut at 4 weeks which may have helped although I didn’t notice a huge difference with his feeding afterwards.

If baby seems happy and healthy and is steadily gaining, even if it’s very slow, I think all is well. Sounds like you’re doing great. They do seem to go through little growth spurts so maybe he’s due one soon. Sounds like your HV is supportive so I’d see how things go over the next few weeks. x

I can totally relate hon, it's so disheartening when you're trying so hard to make breastfeeding work but little one isn't gaining weight. My little girl, also c section, is 10 days old and hasn't been putting weight on. I've been exclusively breastfeeding too and she has wet nappies and actually poos like an elephant so something is going in!! But she hasn't put weight on since we left hospital a week ago. I seem to have plenty of milk but she's very lazy to feed and I spend a lot of time trying to keep her awake. It's exhausting and I was so upset when she got weighed today and still no progress. Have just started to express with a rented electric pump to complement the breast and I'm so relieved I'll have some more control over how much she's getting. Definitely an option before resorting to formula. I hope your little one starts to fatten up nicely soon xxx

Sprinkles86 in reply to MissSaoPaulo

Hi pinkie93, I had a section too - the mucus plus all the fluids you get during surgery can make baby ‘puff up’ a bit so can make them heavier than they would have been if born vaginally, so have greater weight loss at the check.

My son still hadn’t regained birth weight by week five though and turned out to have a tongue tie (despite me being told by MULTIPLE healthcare professionals that he did not have one). Once it was snipped he piled the weight on!

I would say get some face to face breastfeeding support too as even a slight change can make a huge difference - for us it was making sure his arm was tucked under me around my waist (in cradle hold) rather than between him and me. Keep doing lots of skin to skin, keep baby close and keep putting him to the breast whenever he starts rooting (or even when he doesn’t 🤣). Look after yourself and keep well hydrated - keep lots of snack and big bottle of water by your bed!

I gave my son a probiotic to help with gut healing, baby infantis by biocare, he still takes it now and he is one.

It’s so hard with section babies as it takes longer for your milk to come in anyway and they are very sleepy at the breast because of the mucus so makes it harder for them to stimulate your supply. It sounds like you are doing an amazing job mama xxxxx

I would have thought the important thing is that he’s gaining weight, no matter how small, and not losing. I’m a new mummy myself (also emergency c section) so I understand the worry (though luckily mine has gone from an 8.4% loss to 5.3% in a week) but if your midwife isn’t too concerned then try not to be either xx

I didn't have a CS, was induced, baby's birth weight was 2.7kg .. After 1 week of delivery I started expressing milk to feed him n feeding him directly.. His weight increased drastically to 5kg at 4weeks.. I was also eating up to 8 times daily(fruits inclusive) n drinking plenty of water. I believe my regular n healthy eating helped a lot. Just be calm since ur baby is very active n still gaining weight not reducing..

I had a vaginal birth but he still had load of mucus and although he only lost 6% he didnt regain until 3 weeks. The health visitors worried me as was visiting ever other day to weign him! Afterwards when i spoke to others with children they all said their little ones didnt go back to birth weight at 2 weeks (which is what the health visitor told me should happen).

Try not to worry x

I didn't have a c section but my baby came just before 37 weeks and lost over 10% of his birth weight. I was advised to start expressing and topping him up after a breastfeed with expressed milk. I did this a few times a day and he started gaining weight really well.

My LO is now 19 months and I'm pregnant with my second. He is still breastfeeding at bed time and occasionally during the day at nap times.

Don't feel any pressure to give formula. It sounds like your baby is showing all the signs of feeding well, so just keep it up and maybe give him the occasional top up. Keep doing what you're doing and I'm sure you'll notice some significant weight gain really soon.

quite a bit of weight at the start of my pregnancy, I'm now back to my pre pregnancy weight at 27...

25 weeks and no weight gain

been. I'm walking three miles a day, completely cut out alcohol/smoking and caffeine, replaced all...
•
14 Replies

kind of weight gain normal? still have 6 weeks to go so dread to think how much more i might gain....

Hello all! Last night I made the mistake of weighing myself. I was just wondering how much weight...

put him down at all because he just cries. Health visitor also suggested he’s feeding too...