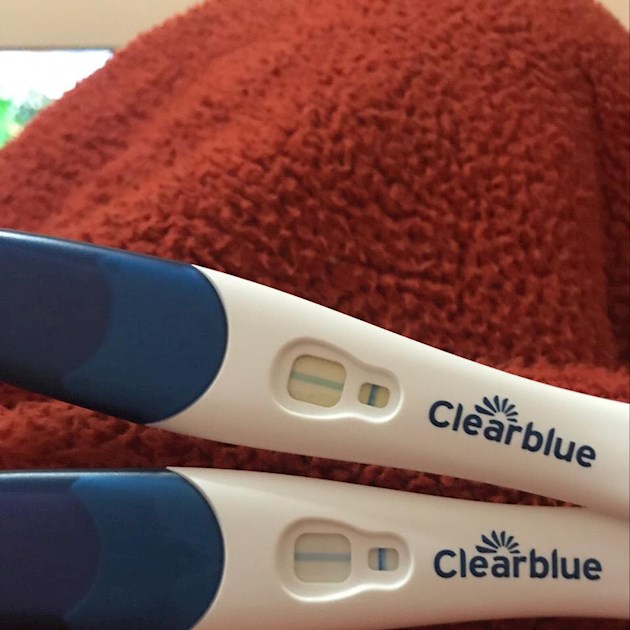 Hello. Im very new to this I really don't know how to ask. I am 15 days late already today. I have taken 4 pregnancy tests & they all come out super faint & 2 Clearblue Digital tests & they come out not pregnant. . I am not sure if this is a result of a chemical pregnancy but I would like other moms or mom to bes opinions? I am going this Friday to get a blood test. I am not sure if you guys can see the lines but my SO & I do. Thank you in advance!

Samm_18
To view profiles and participate in discussions please or .
Read more about...
30 Replies
•

Yep, I see them. I think you're pregnant. You can get false negatives but very rarely false positives. Best time to do a test is your first wee in the morning. Good luck x

Samm_18 in reply to JDaisy

Hi can you tell me if you think the is positive

I would say the same. Faint line or not a positive is a positive.

Samm_18 in reply to rachellj93

I am not saying they are not faint positives but I would be wary of these blue dye tests. I have thought I was pregnant in the past when using these and others have said the same. Try a pink dye one or try again in a few days. Good luck.

KellyTrip in reply to Samm_18

I found the cheapies just as good! Just for your peace of mind as it has happened to me and I never used the blue ones after!

I can see the line on the top one.

I would say don't drink anything and use second morning pee as this will be more concentrated, then first morning pee (there will be less water in it)

It's good ur going to the drs to have a blood test done - that will give you a pretty clear answer.

It is possible that a chemical pregnancy or miscarriage will follow if your hcg levels (what a pregnancy test detects) isn't doubling every 24 - 48 hrs; but the only way to know this is repeated blood tests.

Wishing you the very best of luck, I have heard of lots of women who didn't get clear positives until 2 months pregnancy, so fingers crossed for u xx

Samm_18 in reply to Oliversmum

Thank you I hope so as well!

That actually does! Thank you for the information

Omg! Ill definitely get a different test then

Hey did you say the digital ones said not positive? They tend to be more accurate. However as other people have said you are slightly more likely to get a false negative than a false positive (they only happen in the case of chemical miscarriages').

I definetly test again, perhaps do another digital one. Good luck with everything!

I fell pregnant last year but no pregnancy test (tried clearblue and first response) came back positive. I even went to the doctors when I was about 4 weeks who told me I wasn't pregnant. It was only when I had bad abdominal pains and went to hospital that they confirmed I was 5 weeks pregnant. I would retest in a week or so and if you have no clear positive tests and still no period, go to your doctor xx

KellyTrip in reply to Samm_18

Thank you! We are leaving everything in Gods hands🙏🏼💕

Hi I got the same results on my clear blue today. I don’t know what it is. Did you find out what it was in blood test?

I just got same result but I can feel something moving in my stomach and my navel feel like something is pulling it from inside..

hey kind of late but i am having the same issue what were your results ?

Seb9 in reply to Soniam01

If you have a look at her follow up posts her bloods tests came back negative.

Soniam01 in reply to Seb9

I am 9 days late past my period. I took this test with early morning urine a three days ago. I have...

Three Clear Blue tests… one negative, one faint positive?, and one with no control line? I am only...

again and terrible heartburn so thought I’d test. Very faint positive. This could just be my hcg...

of the result! IHowever I have noticed a very faint positive line, could this mean I am pregnant...

did 2 pregnancy test and both came back with a faint positive would it be safe to say she's...

The horror of being induced