Dear Tinnitus, : I adjusted when you came... - My MSAA Community 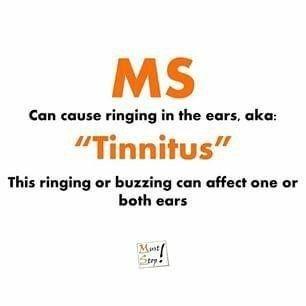 I adjusted when you came to stay in my right ear. Even though it was very strange to hear the constant sound of the ocean (buzzzin). And can make hearing hard sometimes, I got used to it.

But OMG! If you are now going to be in my left ear, PLEASE get on the same frequency as my right!! 🙉😐🤣

Anyone else have this problem? 🤔

Jesmcd2
CommunityAmbassador
To view profiles and participate in discussions please or .
37 Replies
•

How did you realize this "ringing " in your ears 👂 wasn't "normal" but actual tinnitus related to MS?

My PCP said yup probably 😂🙉 then sent me to the hearing guy. And Dr. Dogie Howzer there said it was all the concerts I went to 😐 (Dude I grew up in ALASKA we don't have concerts! 🤣)

But my neuro said it probably was related.

I call it my beach! Its like when you hold a Conch shell to your ear, and you can barely hear the waves! 😊 🤗💕🌠

Oh no, I'm so very sorry to hear that this is still going on for you. I hope that you are able to get some relief soon.

I can mostly ignore it, but this left ear needs to get with the program here! 🤣😂🤗💕🌠

Mine seems to be in living stereo with the balance knob set to the exact middle. It sounds like the high pitched screech from an older TV with a bad flyback transformer.

ck722 in reply to Jesmcd22 months ago

It does get old and quite bothersome. My shop was just under the flight deck of the USS Enterprise. The noise was crazy loud.

That had to be crazy loud!! I've seen the little ear plugs the Navy gives ya too! Useless! 🙉🙉 🇺🇲 Thank You 🤗💕🌠

ck722 in reply to Jesmcd22 months ago

ear plugs and Mickey Mouse ears. To hear the announcements over the roar you would open your mouth

I can relate to that

Oh golly, Jes...my tinnitus began as an every now and then thing before I was diagnosed. It started as a sort of machine hum that would come on suddenly, and send me in search of whatever I had failed to turn off. Then it evolved. For a while it was chirps, then clicks, even quacking (which, as I am fond of ducks, I found pleasant). But after my diagnosis, it settled down and found a permanent, annoying home inside my head. Now it is constant, a highpitched sound that is sometimes louder, sometimes softer but always present. I can hear it even when I am mowing the lawn with ear plugs in! The other day, in looking up Exploding Head Syndrome (which is currently visiting as well) I read that it may be connected to tinnitus...and that both can be caused by nerve damage deep in the brain. I once read a news item of a man who committed suicide when his tinnitus became unbearable. I would never, not even for a second, consider ending my life because of this, but, believe me, I could empathize. It is so annoying when medical professionals treat it as trivial...because it certainly is not!

What is Exploding Head Syndrome? 🤔 Im going to have to Google!

Well at this point I'm not telling my neuro if I have a relapse. Sooo... It just better not be doing any funny business in there! 🤣😂

Exploding Head Syndrome is a sleep disorder that isn't well understood or much studied. In my case, I will be awakened with a whole body jerk because of a loud crashing noise. The first time it happened, when I couldn't locate the source, I thought I was going crazy. Sometimes it sounds like an explosion, other times like a ton of breaking glass, other times as if an alarm has gone off...but it's in my head. It's obviously neurological and infrequent. Sometimes once or twice a week for several weeks, then half a year when it disappears. I'm used to it now, but it's another one of those symptoms that I think are related to MS damage that can't be seen...and because it can't be seen, tends to be dismissed.

I forgot to mention that because I come to the forum, a few years ago, I mentioned it because it is so puzzling. I'd told my doctors and they brushed it off. But Allen responded, bless his heart, experienced it also and knew what it was called. I am grateful to him.

🤗🤗🤗 Holding you down! 🤗🤗🤗 Im so sorry that you have to deal with this. And I wouldn't be surprised if it was from damage done! 🙁 The brain is a tricky thing. As we all know! 🤗💕🌠

I loss the hearing in my left ear in 1998 due to an ear infection and the ringing drove me crazy. Then one day I realized I didn't hear it anymore, it's still there but my brain got used to it so it's like background noise that you don't pay attention to.

My exploring the internet did not find any connection between MS and tinnitus.

And MSAA has an article anyone can d/l also mymsaa.org/PDFs/MSAA.Motiva...

I hope these help everyone! 🤗💕🌠

Thanks. I see the reported connections too.

Yes! It just started a few months ago and sounds like crickets chirping. Luckily it is very loud. It did take me a few days to realize that it wasn’t really crickets 😆! I asked my husband if he heard crickets and he said no so I figured it either meant I have gone crazy or I have tinnitus. I kind of leaning towards crazy but who knows.😂

Sounds right to me.😜😆

it happens in my right ear. though it started at the same time as trigeminal neuralgia, i didn't connect it to 'another one of thoooose symptoms.' of a sudden it almost feels like i've gone deaf and then the ringing, first soft, then really loud and then gone. i hope it doesn't get worse.

Sorry for the late response. Been BUSY, that's good! Ringing in the ears, what ringing? Oh yeah, that's been there my whole life, almost. No, not really, but it started years before being diagnosed. Both ears. Never changing. Kind of like white noise? What'd you say??? Doc's figured it wasn't worth worrying about. So I just moved on and got used to it, so that I completely ignore it, unless I focus on it. Focus, Focus. Nah, no problem if you stop thinking about everything else. Yes it's there. Speak up, I can't hear you is becoming more and more common, so either people are talking softer, or I'm losing my hearing? Oh, yeah, it must be the ringing!

Not a whole lot to do about it, so move on. You can spend big bucks trying, but, till you find actual persons who have lived with it, then silent. Maybe they died? Nope, I was told from someone who went into the lite, spend some time there, and came back, the ringing does not go away, but you become aware of it again! I wonder if you can ignore it in the afterlife?

Oh yeah, one more thing. I've used white noise for years at night. I helps to blanket someone else's snoring, I'm not saying who. I went thru a sleep study as a result of my M.S., my neuro thought I should because? I never fell asleep the whole night, but they had records otherwise? What because I can sit calm as dead, but be fully coherent on everything going on around me. The building creaks like they all do, did you know that. Yes I know it's made out of steel and concrete, but it still creaks. Maybe the drywall rubbing on the metal studs? That's it, it was more squeaky! Anyway....so I was defiant on simply accepting their recommendations. I did the C-Pap thing for how many months? Then I bought my own blood O2 monitor, with recording capabilities. I recorded my sleep sounds and graphed them out. I had a full nite time recordings of me at night, all night. Graphed and recorded for a year? Yep, nothing wrong with me, as long as I don't sleep on my back. That's okay, I prefer it. Always the same side. For decades and decades. I researched that too, why my xxx side? But not going there now. Got off track. White noise. Helps me. Never woke to ringing in the ears. But, be it a fan, window A/C, or one of those white noise machines...Alexa, turn on white noise, and mine comes on. ZZZ!

Being busy is always good! So they tell me! 😂 J/King never enough time somedays! Of course you never focus on it!! It would drive me insane!! Well more insane! 😂 I fall asleep with the TV on so that helps alot!!

I have a constant hissing sound in both ears. I've had it all my life. I usually only heard it when it was quiet. I thought that's what quiet sounded like. I was in my late 30s when I found out that's not what quiet was. I was told there wasn't much that can be done. Now its louder when i don't have my hearing aids on. Somehow my hearing aids drown out the hissing sound. I never thought about it being MS related especially since ive had it as far back as I can remember.

I have heard that hearing aids help? You think they do? 🤗💕🌠

They seem to drown out the hissing. I hear it as much when I have them on. But after I take them off I can really hear the hissing noise. If I shake my head or sneeze it's a different kind of noise as if some was ringing a long bell & waving it past my ears.

Have you ever had a conversation with your legs? Today I wrote a letter to my legs thanking them for

memory (I don't know how else to describe a remembered sound) that I \\"hear\\" though I know it...

The ringing in my ears is driving me crazy! Over the last several months it's gotten increasingly...

equipment advice Does anyone own a scooter you'd recommend?

Gratitude: what are you grateful for?