Just been dxd with NCD: It figures it... - My MSAA Community 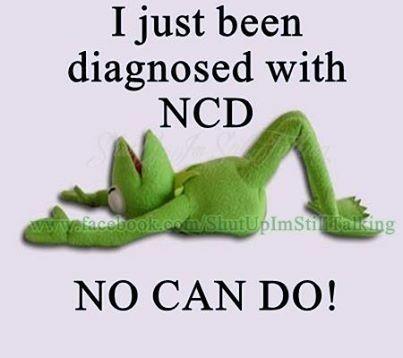 It figures it would happen to me! 😭

Have you ever heard of it?🤔

My sympathies, I hope that somehow you can find a way

Doubled51 in reply to RoyceNewton

Morllyn in reply to Doubled51

I'm not looking to cure

Of all my comorbidities, No Can Do is the most useful and helpful. It's my go to excuse to get me out of awkward invitations and things I don't want to do.

yep, got several of those. This is why many of my friends can't understand.🤣🤣🤣🤣

Self diagnosis is a useful talent!

My former (very despicable) boss said I needed to learn the "Can Do Attitude." So I was cured really fast...

I am hoping that I can avoid this until after my move, Jesmcd2

So until then, I will keep hopping away!

So that's my undiagnosed issue!

yup, gotta too. It gets worse around insensitive people who don't understand us, and refuse to learn.

And the hits just keep coming...

Life has been so stressful since last October. As you may remember I lost a sister to suicide in...

before Christmas 2016, but under the new criteria would have been diagnosed back around March 2012....

I live with MS everyday. I don't think it will ever get easier but manageable. I wake up tired. I...

Just to be a complete nag today.

found away so WILL YOU, BECAUSE YOU ARE YOU andYOU can be the best YOU that U HAVE EVER BEEN....

I'm glad I got the second dose but...

Best states to live in for people with MS

New to the group