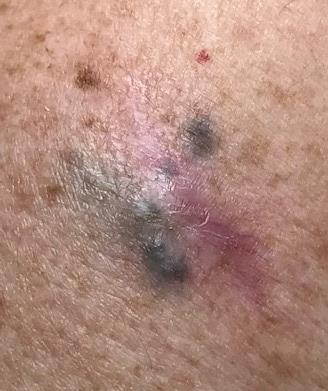 Update: Today is a full body Pet scan again for my husband who has Stage 4a metastatic melanoma. This is to rule out any surprises as he moves into a hybrid approach for the 4 locations of current small tumors located on the shoulder, clavicle, abdomen and side.

The image attached is from his shoulder where the melanoma has continued to grow and is a dark blue/ black. It is actually about double this size from when I took this photo 11/2/18. You can also see where it is red from previous surgical excision from the same area a year ago. The radiation planned will be for 6 rounds, every other day in delivery. He will get 6 Gy for a total delivery of 36 GY using a protocol out of MD Anderson in Texas of higher intensity radiation over a shorter duration. Efficacy is the same as the lower dose/ longer duration of treatment. They will expand the radiation target field about 2 cm from where all visible melanoma is.

For the other 3 locations he will have surgical excision in the oncology surgeon's office. Waiting for dates for these.

In other news, the side effects from the discontinuation of prednisone seem to continue to lessen: less queasiness, less shaky hands.

We are feeling grateful to have plans in place to move forward since more immunotherapy is not available (He's had 42 treatments of Keytruda and 3 of Yervoy). Since he is Wild type the BRAF specialist in Columbia recommended none of those meds for my husband. That's our update as we keep moving forward into 2019.

Good luck today with the scan and glad to hear he is starting to feel better. Thinking of you and your family.

I’m glad he is getting some relief from side effects and I’m sure you are too! I hope you are getting relief as well with the treatment plan in place. Please let us know how the radiation is working! Sending hopeful thoughts for positive PET scan results!

missyrandAmbassador in reply to Hidden

See my summary a bit further down in this thread. Thanks for checking in on me.

Missyrand, Your husband certainly has a lot going on at once.

How does he handle the radiation? So far this is a treatment my husband hs not had.

Sounds like some good news that the side effects have gotten better.

42 immunotherapy treatments is that about 2 yrs? My husband will be approaching the 2 yr mark end of July. Our Dr has mentioned both 2 or 3 yrs as a stopping point. I am praying for 3 yrs., as stopping really frightens me. He is on Opdivo.

How did everything go with your husbands PET scan? I pray everything went well.

Wayne initially was in the 2 years of Keytruda, then had a distant metastasis appear right as we were hoping to discontinue the infusions. Like you, we had some anxiety about stopping the immunotherapy and anticipation at hoping to stop. Because of the new location at 24 months of treatment, he continued Keytruda for 5 more months, but more sites appeared in his skin (oligometastasis of the cutaneous skin).

We have learned that the 2 years for immunotherapy was just the initial benchmark for all the studies (they have no idea how long you should have it...). There is also research that you can stop an immunotherapy and start another, or even return later to more use of the initial immunotherapy. Research is all over the place at this point and seeing what applies in your own situation with consultation and reading can help, but I think we are all still so new in this treatment world that long term effects, how much is exquisiting enough and for whom is still not all known. Generally folks who have an early response to immunotherapy seem to have the best durability. Early response means shrinkage of tumors on scans.

At Georgetown in DC they have been running an experimental protocol for Optivo plus Yervoy comparing combo therapy for those getting 24 months of Optivo to those getting 12 months. One of our group members was in the randomized arm of 12 months. He only tolerated 1 dose of the combo with Yervoy, and was in the treatment arm to stop the Optivo at 12 months and is doing very well. He had lots of tumors in brain, lungs and liver and all have cleared (he first had brain surgery to remove 2 large tumors, but others were still there and diminished with immunotherapy). The Phase 3 trial is called Checkmate 067 and here is an article: immuno-oncologynews.com/201...

The Pet scan my husband had this week showed no significant changes to the 3 places we have been watching including the shoulder in the photo of this thread. However, the day after the scan he found 2 more small tumors (one on head and one on back), so back to the oncologist on Wednesday 1/2/19 after he gets measured for radiation earlier that day. I'll keep you all up on how that goes.

Today our son and his girlfriend are coming for an overnight. We plan to walk about DC where the Smithsonian is still open in spite of the government shut-down. It's lovely and sunny and we are looking forward to this visit with them.

As we say here in the south, peace y'all

Any word on PET scan?

see above. Thanks for asking.

Glad to hear the scans have back unchanged. I love DC. So pretty and so much to do so have a great time with your family.

I always appreciate your positive attitude and sharing information Missy.

Hi All - my 40 yr old husband, who had a melanoma removed from his chest a few years prior and had...

the middle of Wednesday.

My husband is measured and targeted for radiation that was scheduled to...

year old husband Darren. He was diagnosed April 27th 2016 with Stage 4 Metastatic Melanoma in the...

potassium. He is continuing to suffer from diarrhoea and now sickness. He’s lost 3stone in less...

Recently diagnosed with stage IV melanoma, looking for recommendations for cancer hospitals on the...