How can monkeypox affect your brain? ... - LUpus Patients Un... 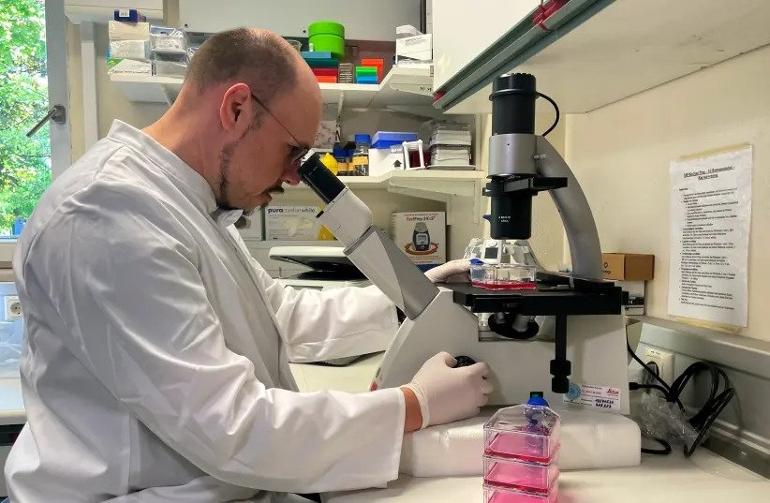 Head of the Institute of Microbiology of the German Armed Forces Roman Woelfel works in his laboraty in Munich, May 20, 2022, after Germany has detected its first case of monkeypox.(photo credit: REUTERS/CHRISTINE UYANIK)

In addition to a blistering rash and flu-like symptoms, the monkeypox virus could wreak havoc on your brain, new research reveals.

Since the widespread outbreak of the monkeypox virus began in May, symptoms have been described as flu-like, in addition to a blistering rash. New research sheds light on other complications the virus could cause: an array of neurological conditions, including confusion and seizures.

The findings, made up of several new studies from teams at UCL, Barts Health NHS Trust, Guy’s and St Thomas’ NHS Foundation Trust, and King's College London, were published Thursday in eClinicalMedicine. Monkeypox virus infections, which in humans were seldom reported outside African regions where it is endemic before last spring, often cause muscle aches, fatigue, headache, anxiety and depression in patients, according to the study.

The World Health Organization (WHO) in late July declared the outbreak a global health emergency. The global death toll since the outbreak is at least 15.

“There is also evidence that mood disorders such as depression and anxiety are relatively common for people with monkeypox.”

Lead author Dr Jonathan Rogers said: “We found that severe neurological complications such as encephalitis and seizures, while rare, have been seen in enough monkeypox cases to warrant concern, so our study highlights a need for further investigation. There is also evidence that mood disorders such as depression and anxiety are relatively common for people with monkeypox.”

The review comprised of 19 studies, with a total of 1,512 participants (1,031 of whom had a confirmed infection based on CDC criteria or PCR testing), residing in the US, Nigeria, Democratic Republic of Congo, Republic of Congo, and the UK.

The researchers noted that further and larger study is needed to determine how monkeypox can impact the brain, but it is clear that it does indeed play a role. The teams estimated that 2.7% of monkeypox patients experienced at least one seizure, 2.4% experienced confusion, and 2.0% had encephalitis, a serious condition of brain inflammation that can lead to long-term disability. There was notably limited evidence for the prevalence of such symptoms, as the review only identified two cases of seizures, five cases of encephalitis and six cases of confusion.

How does a monkeypox diagnoses impact mental health?

Furthermore, the researchers note that monkeypox may cause higher rates of mental illness than other illnesses due to the presence of potentially disfiguring lesions, while there may also be stigma linked to how transmission is typically from close physical or sexual contact. However, the review did not involve long-term follow up to check on patient's status after the initial phase of illness.

How can these horrific pains be invisible