What are B-symptoms?: A cross post from Shar0n... - CLL Support 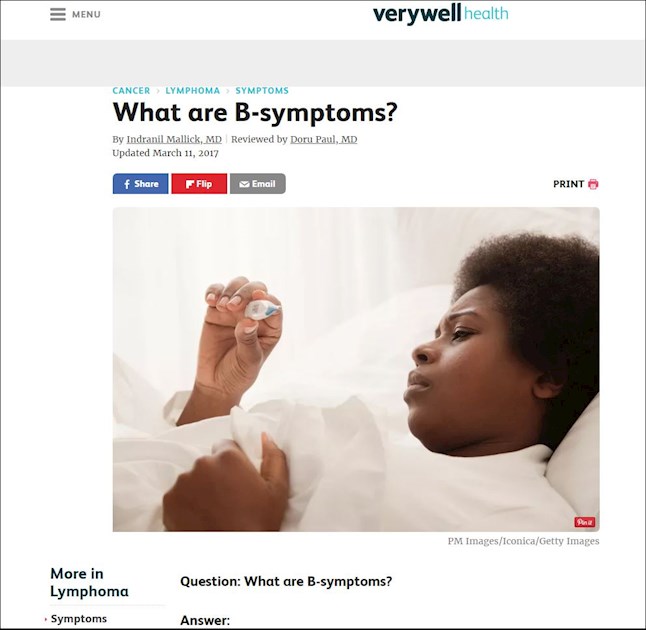 What are B Symptoms?

This is a good explanation of what the term B Symptoms means and how it may affect our diagnosis :

B-symptoms may also be described as “systemic systems” or “general symptoms,” but in the case of lymphoma, the term refers to a specific set of three symptoms that may predict how the malignancy is likely to behave:

Weight loss without trying, exceeding 10% of body weight in 6 months

A person with lymphoma and any one of the three symptoms above is said to have B symptoms. There are two major categories of lymphoma: Hodgkin lymphoma (HL) and non-Hodgkin Lymphoma (NHL). Patients either type of lymphoma may develop B symptoms. One of the most common symptoms of lymphoma, in general, is the enlargement of lymph nodes. B symptoms may or may not be present in various cases of lymphoma but when they are, they may help predict how the lymphoma will behave and which treatments might be best to start with. B symptoms are most common in more rapidly growing lymphomas.

What are the withdrawals symptoms of Ibrutinib?

.That helped! I still struggle with allergies symptoms on a daily basis, but is getting better,...

What were your symptoms just prior to treatment?

here, but first: My case seems quite unique in that I virtually have to symptoms other than an...

What symptoms of CLL do I really have to worry about?!

and Wait. I am struggling to work out exactly what symptoms I have to really worry about! Was...