As per the title, just wondering if anyone here has cultured this particular mouthful. Littleun took one look at the full name and promptly renamed it malteasers for ease 😁 In light of the ongoing uncertainty about S. Maltophilia being causative or correlative, I’m particularly interested in whether or not people were given treatment and whether they were symptomatic: she’s been fine in herself but had increased productivity and chest symptoms prior to culturing this. Her team have come back and said they wouldn’t normally treat, however they’re going to give her two weeks of cotrimoxazole when she goes in for elective IVs next week - I’m not sure why they won’t start orals now given she cultured it on the 27th, and no one seems to want to answer. I’m a bit cross as I only found out by chance she’d even cultured it, and she has prior form for exacerbations with bacteria not normally considered an issue 🤷‍♂️ 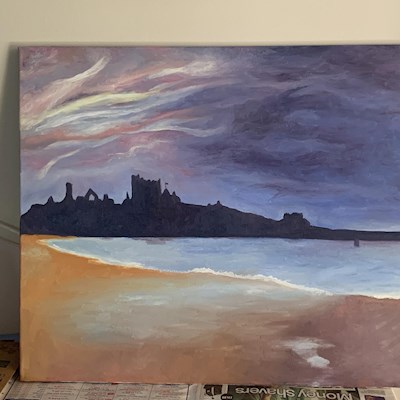 Charlie_G
To view profiles and participate in discussions please or .
Read more about...
7 Replies
•

Yes, my OH had this strange little beast last year. It's full name is Stenotrophomonas Maltophilia:

I had never heard of it and neither had his GP. Anyway, he has asthma, bronchiectasis, immunodeficiency and if we suspect an infection I don't waste time in taking a sputum specimen to the respiratory unit to have it cultured in the laboratory. On this occasion he was quite poorly and ended up in the unit as an inpatient. Whilst there the result came back indicating this bug.

Treatment was oral Septrin and he was on it when I brought him home. I think it might have been a one week course or maybe ten days - can't remember for sure. I took another sputum sample in about a couple of days after treatment had finished and it was clear.

I don't know why your treatment plan is different except that AFAIK it is the microbiologist that takes the lead in advising about antibiotic use - the doctors just prescribe it. I hope that your little one is soon recovered.

Likely because almost everything is slightly different in cf - all antibiotic courses are 14 days minimum as standard, and microbiology determine which drug(s) will work against the bacteria cultured, but the treatment plan is predominantly determined by the consultant with the aid of the team pharmacist based on patient history. Good to know that they treated your OH based on the fact he was symptomatic: the guidance is still clinical judgement because there’s not enough research or evidence about this bug to do otherwise. I just get a bit frustrated with her team sometimes because they like to forget that littleun likes to be odd and do things differently - she ended up properly ill with an Acinetobacter that they don’t normally treat a few years ago.

Thank you for the explanation. He was better following treatment. Infection is a big trigger factor in his asthma so he does need medication. Bronchiectasis protocol for antibiotics is the same as cf - two weeks. In this area we find that the microbiologist is the antibiotic gatekeeper and they determine the treatment plan.

That’s why I’m here - Bronchiectasis and cf are incredibly similar, but I missed you mentioning hubby’s diagnosis. If they suspect you may have cf but can’t find a second mutation, you usually get a Bronchiectasis diagnosis because the treatment is so similar in either event. The cf trust forums are near enough dead and have been for years, at least the parents and carers section, so I’ve made the BLF my home

Yes, I have read that cf and bronchiectasis have similar characteristics. I read up about this bug when he got it and was rather alarmed. I’m just re-reading due to this thread and found this useful information:

This authors mention that it is becoming an increasing problem, particularly in hospitals. It is resistant to many antibiotics.

On reflection I feel that he was lucky to have it identified and treated early on. According to the article it can be a cause of pneumonia and we know from his immunology blood tests that he has poor resistance to this. He has had several vaccines for this just recently.

S. Maltophilia is similar to pseudomonas in that it is found in soil and water. Nebulizers can be a source of infection. I take extra care by only using pots once and washing them in warm water and antibacterial hand wash. I then scald the pieces with boiling water before air drying. I don’t know what else you can do to prevent it.

I don’t understand why your little one hasn’t already been treated. AFAIK each infection has the potential to further damage lung tissue. I hope that your little one soon gets the treatment and gets rid of the bacteria. Please let me know how you get on.

For a long time S. Maltophilia was actually classed as a pseudomonas, in part because it’s gram negative. The drug resistance element is what makes it a real threat in nosocomial infections such as pneumonia, but septrin tends to work orally, and ceftazidime is the first choice for IV. If she weren’t systemically allergic to it, she’d be having cef alongside tobi for the next two weeks anyway, but because she hasn’t been able to use it since she was 4 they’re saying orals on top of her normal anti pseudo IV protocol.

I’ll see if I can find the most recent research paper on it again, but essentially the current guidance in cf is that treatment should be based on clinical judgement: it’s a bug being found with increasing prevelance, however they still can’t decide if it’s a legitimate infection in its own right and therefore should be treated with the same importance as we would pseudo or staph etc., or if culturing it is simply a non-deteriorative indicator of lung disease that can be ignored as long as the patient is clinically well. It *is* quite often found in patients with known chronic infection of other bacteria (typically pseudo, but not exclusively), so there’s a thought process that suggests any symptoms concurrent to a positive culture for S. Maltophilia are more likely attributable to the other bacteria already present. But that’s why her team are saying they wouldn’t normally treat it, however they will as there are clinical signs of mild exacerbation. It’s a bit like where she’s been consistently culturing one of the candidas for years: medical science don’t fully understand why cf lungs would colonise a yeast, or what the implications are for those that routinely do, but atm believe it’s not something that needs to be treated. The difference with this bug is that there is a suggestion that those with chronic colonisation may have a higher incidence of death and/or transplant, but as above, they can’t sufficiently prove anything one way or another.

Thank you. You have done a lot of research into this and have taught me something. You mention pseudomonas being sometimes concurrent with S.Maltophilia. OH is colonised with pseudomonas. Every so often they come out to have a party and when we suspect this is happening I immediately take a sputum specimen into the hospital. At the moment it is controlled with nebulized Colomycin plus a better clearance regime due to using the Smart Vest two or three times a day.

From what I read in that link, S.Maltophilia can be quite serious in people like my OH who have immune deficiency and as you say, it can be fatal in such patients. I did some research myself but not with as much thoroughness as yourself. The hospital staff told me nothing. We have never had any information or guidance on the matter.

Our situations are different so I can see why the treatment is not identical. Although this has been known about since the ‘40s, as you say it is now becoming more prevalent so they are perhaps developing protocols on how best to manage it in particular situations.

although her fev1 is fairly decent at 66%. Whilst discussing ‘The Plan’, it came to light that...