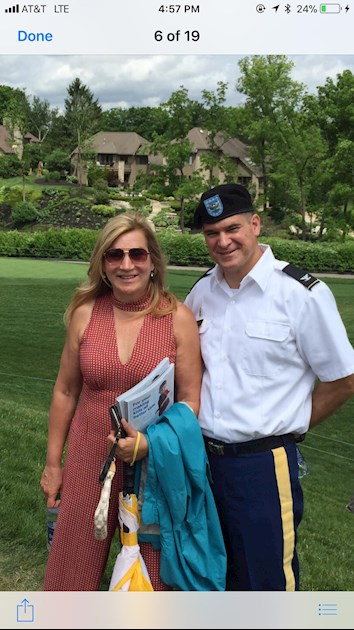 I havnt written in a while because husband has been doing well. Decipher test came back not aggressive just adenocarcinoma and he was tolerating ADT and radiation wel till past three days .

This is starting week 3 to prostate bed pelvic area.

He has been very uncomfortable is his word to abdomen area past 3 days 5 out of 10 pain.

Took him to ER last night thought it could be diverticulitis since it showed 3 mo ago on colonoscopy a moderate amount of diverticuli,

Dr obviously said consult your oncologist Monday then went into well even though he had colonoscopy3 months ago it could be something.

Now I’ve researched and found it’s common to have radiation enteritis which most get when having pelvic bed radiated. Seeing oncologist tomorrow because he also has 5 weeks left of radiTion.

My question is anyone experience such uncomfortable throbbing to the abdomen also?

Hate seeing him like this and now the ADT causing all his muscles to ache but he does work out everyday!

Also he was a 0.8after radical prospectomy 3 mo out Gleason a 3+4, scans clear and current PSA 0.05 that’s why they started radiation along with ADT

It depends on if he is receiving prostate bed radiation only, or whether his pelvic lymph nodes are being treated as well. If prostate bed only, he shouldn't be having radiation enteritis. If they are treating the whole pelvic area, it may be a symptom. He can ask his doctor if he can try mesalamine, which is a specific anti-inflammatory for enteric tissue. If he takes it in pill form, it can reach his upper bowel.

Hi Allen, my dad is on session #15 of 28 full pelvis area radiation LN included. Very uncomfortable bloating and bowel issues. He says its diarrhea but nothing comes out. Could be be in trouble? Blockage?

I may just be tenesmus, which is common.

Thank you. Trying to help him improve his diet, more fiber and fruits. Hes still working fulltime while doing radiation at night. Hes a trooper but struggling right now with bowels and also having leg pain for a few hours a day. Hes on L, Z&P.

This is not a good time to change his diet by adding fiber and fruit as increased bowel motion may make the radiation miss its target.

He has been having more fiber since about a year ago. What should he do about the tenesmus type symptoms? Hes having abdominal pain, leg pain and bowel issues and has 13 more full pelvic region sessions left.

Tenesmus is something one just recognizes that it is a feeling that happens because the bowel is inflamed. It feels like incomplete emptying, but isn't. It's important to recognize it for what it is, so one doesn't strain - which can cause other problems. NSAIDs may help. If they don't, he can try a mesalamine pills or suppository or anusol with hydrocortisone. The leg pain is probably unrelated.

Thank you will emphasize this to him. He thinks the leg pain is a side effect of Zytiga. Its daily for about 1 to 2 hours after his first dose.

Can you suggest a site for proper foods during this time? I am confused what is best for his meals. Thanks allen

I can only repeat - This is not a good time to change his diet. He should continue to eat what he always eats. Dietary changes promote bowel motility which is the opposite of what he needs now. It will increase the toxicity of treatment. Wait until after the radiation is done. I know the feeling of wanting to do something, but sometimes it is best to suppress that urge.

He is having SEVERE constant diarrhea. Peeing himself. Cannot control pee, thinks it's coming out the rear end... bloating and gas all the time. Still has 10 sessions. Doesnt like the idea of a catheter but it seems necessary at this point.

What does his radiation oncologist suggest?

The RT had a cumulative affect on me. At about 3wks as you said , fatigue and ab pains , discomfort, hemroid , all of this is possible, and normal to what I experienced . Eat healthy to keep bowels and the immunity in your gut healthy also. RT a nessesary evil for me along with adt have helped me into a better place. I wish the same for your husband...this is a real test for all concerned from point A to point B.... working as planned these methods can extend life .. side affects abound for some, others suffer more. He will do what is needed. Love will help the healing.. he has you however, he ain’t doing too bad. I’m one of the lucky ones that has true love with me every day.. can’t ask for more than that.. gratitude for what we have... 2yrs after RT I stiil can’t have any pressure on my pelvis. Has some severe pain after a 8hr car trip and holding it too long between rest stops. Though5 it was mets. My onc9 said not mets, rather fibrosis like scar tissue were RT killed cells. We are altered by RT and adt . The price we pay to be here .... side effects Go with the turf.. Good luck...

AnnieAppleseed in reply to Hidden

Here is the Evidence-based Handout I created to help with treatment toxicities. Natural approaches. annieappleseedproject.org/w...

Hidden in reply to AnnieAppleseed

Thank you once again .. we liked the natural approach. Much appreciation. Take care...

I had rectal bleeding during and after radiation to prostate bed only. Colonoscopy found mild diverticulitis but damage to rectum from radiation. Treated with high frequency radio ablation . Seems to be under control four years later . I also use stool softeners to reduce straining which is important.

Hidden in reply to Break60

I had 13 weeks, 5 days a week, so 65 sessions of R/T. This was after the Da-Vinci removal the year before with a "Clean in the Margins" declaration.

It was tough for me! About a month in I had pain, and diarrhea, along with sloughing off some colon tissue from there on until a few months after R/T stopped. I still don't have the same function, however most of the normal bowel function returned within 6 months. I was tired and didn't feel 100% for a couple of years.

During that time though... no PSA and I didn't have to take any drugs. So I definitely liked that, however about 2 years later the PSA started to climb and I've been on Lupron, and, or Zytiga and Prednasone since 2012. That is 6 years and I'm still here with a Gleason of 9!

52 is about the age I started all of this. I will be 60 this month! There is a way forward. Keep pushing the doctors to explain, and tell them to get 2'nd, 3'rd, and 4'th opinions if you need them.

Ask the hard questions of your Oncologist! The one's you don't want to hear the answer too. Insist that they answer. I've found that I have to push for those answers.

Hidden in reply to zenbee13

zenbee13 in reply to Hidden

I will dance on the table for your 60'th Lu lu

Hidden in reply to zenbee13

Thank you, we should celebrate every chance we get .. Today we are thanking Mother Nature for bringing rain to our SW desert floor. No rain for over 100 days. Two days ago I saw 116 while driving my car. Today it’s 62 in the daytime.. OHH YAH, TAKE CARE !

I had 39 radiation treatments with no real issue except an inability to urinate during last two weeks requiring a catheter for a week. During this period on no gym work, fatigue set in very quickly. My RO always wanted to know about diarrhea which fortunately was not a problem. Keep up the gym work if possible.

I run a cancer nonprofit focusing on simple natural things to do to reduce treatment toxicity. Here is our evidence-based Handout on that. For radiation, add acupuncture. Add Turmeric/Curcumin daily. Use aloe if skin burns. annieappleseedproject.org/w...

Early side effects from ADT + radiation

days ago, and just started radiation to one spine met and also his prostate bed 5 days ago...

Mds - the most common side effect of radiation

got mds and its the most common side effe t of radiation in prostate cancer treatment. We are...

the next possible step for me could be salvage radiation therapy. While there is a lot of...

bleeding prostate problems pass in urine after radiation? Doc tells me quite common after 6 or 7...

After effects of radiation

My father has just finished his 40 radiation sessions 2 weeks ago and doctor asked to visit after 3...

Joe Tillotson is in Heaven

Is Dairy a problem in PC

How Did You First Become Aware of Prostate Cancer Bone Mets?

Let me try this again, goodbye all.