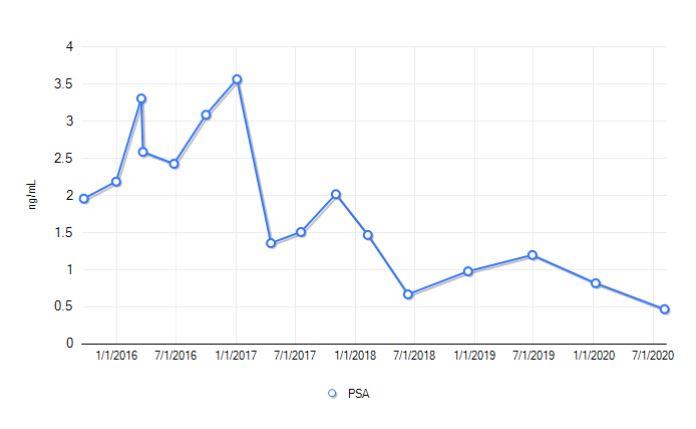 Hi All, I'm posting for all who might have had or are having a bouncy, turbulent PSA ride after brachy or sbrt. Short synopsis is that my husband (G3+4) had HDR at UCLA in 2015. Finally, we got a reading yesterday that was <0.5. But what a wild ride it has been -- really scary at a few points (image below). TY, Allen, for being such a wonderful ally to us. Stay hopeful everyone, and stay strong. Yours, Mary

Hi pjro. Not sure how helpful this will be but I was diagnosed October, 2018 : 5.35 PSA and Gleason 7 ( 4 + 3 ) with 50 + percent penetration in 8 of 12 core samples, with extra-capsular breakthrough beginning in a 9th core. Treatment began November 2018 and consisted of maximum IMRT focused radiation to the prostate and 6 months hormone therapy ( Firmagon ) . Treatment completed April 2019. July 2020 PSA was .277. I am 69 and not sure that my current PSA is good, bad or otherwise, but i do know that I am done with any and all additional treatments. All Best Wishes to you and your husband, judg69

Your graph shows the overall downward trend. I breathed a lot easier after my PSA got below 0.5, but it also took over 4 years. John has the typical prostatitis (see-saw) pattern, so I expect there will be a few more bounces in his future.

Thanks, Allen!! I kind of think I'm getting accustomed to the bounces, as much as I hate them. Do you know if there is any way to deal with the prostatitis-related bounces so we can really know what his actual PSA is? I'm guessing antibiotics is probably about the only thing, but since he has no symptoms, that doesn't seem like a good plan of action. Regardless, I'm thrilled he's below the 0.5 now. What a ride it's been.

There really isn't any way. Antibiotics seldom work and often incur resistance. I think this article describes the problems with diagnosing and treating prostatitis:

BTW- 10 years after my SBRT treatment, last week, I experienced blood in urine and globs of bloody tissue. I knew this was because of scar tissue breaking off, so I wasn't alarmed. It disappeared in a few hours after I flushed it out by drinking lots of water. It seemed to unblock my seminal vesicles because I was able to produce semen at orgasm afterwards - not copious amounts, but some.

First PSA tomorrow 6 months post SBRT for G6/G7 3+4 anxiety already. How much can we expect it to have gone down? Pre SBRT it was 6.68. Nobody told us what to expect. Incredibly nerve wracking. What kind of number should we be hoping for?

Glad the blood disappeared for you in a few hours. That must have been an event you'd rather have avoided. Pca we would rather all leave in the back view mirror!

Knowing that occasional blood in urine is expected (and will probably always happen) means that it is not at all alarming - just high on the yuck scale.

curtisbirch in reply to Sunfire

My PSA was pretty much cut in half the first test after HDR brachy mono therapy. I went from 5.1 to about 2.5. The following six months I dropped to 1.7. Then about six months later I was up to 3.7. Now, two years after treatment, I’m back down to 2.2. So the bounces are frequent and it is, according to a number of respected studies, a good thing for you to bounce around for at least four to five years.

lavis in reply to Tall_Allen

Thank you for the BTW information.

I have had similar experience several times since my radiation treatment on 2013.

I used to get a lot of blood clots, some requiring emergency room visit. Things have gotten better

I find that in addition to drinking lots of water, I can break up the clots by squeezing my penis and pushing down.

When I urinate immediately afterwards they pass much easier.

It’s not certain what cause bounces. They don’t know according to my RO who studied under Dimanes. What does Dr King attribute bounces to? There is one theory I read in one of those “bounces improve your outcome” papers, that it’s due to your body’s immune cells kicking into action. I’ve been in touch with Dr King lately —thanks for connecting me—and I can ask him for his latest theory on bounces. But no one seems to call it prostatitis. Why do you call it that ?

I also had significant PSA "bounces" after my treatment in 2003-4 with HDR brachytherapy + 3DCRT + ADT for a Gleason 4+3, PSA 10+ cancer. At about the fifth year after treatment, my PSA went below 0.2 and has mostly stayed there but did go up again in year 7, back down, and went up a couple more times in subsequent years. My last reading was 0.09. I've needed no treatment since the original radiation.

One symptom that I had that I attribute to prostatitis was a feeling of a lump in the prostate area. I felt like I was sitting on a golf ball. I've heard others say they had the same experience. I'm thinking that the feeling was due to inflammation in the prostate region. I found it a little reassuring in that it offered me an alternative explanation to cancer recurrence.

I agree with Tall_Allen that taking antibiotics is not a good choice when the PSA goes up. From what I have read, much, and possibly most, prostatitis is not due to bacterial infection. It can also be caused by viral infection and is often thought to be caused by other irritants in the prostate region that are not bacterial or viral. Some say it is mineral in origin, like kidney stones. Even when it is due to bacteria, antibiotics often fail to eliminate the infection. If the PSA goes down after taking the antibiotics you might, indeed, conclude that the PSA rise was due to infection. But if the PSA does not go down you can't conclude that the rise was due to cancer recurrence.

At any rate, your husband's PSA trajectory is looking very good and I'm guessing he's out of the woods.

First PSA tomorrow 6 months post SBRT for G6/G7 3+4 anxiety already. How much can we expect it to have gone down? Pre SBRT it was 6.68. Nobody told us what to expect. Incredibly nerve wracking. Thanks for the post and glad to see your on more steady downward trend. We too are grateful for Allen! He helped in our decision for SBRT too. Prayers we all see steady down numbers

Remember, this is a marathon, not a sprint. It's the pattern over years that counts, not any one reading. My first PSA was about half of where I started, but it bounced around a lot (not as much as pjro. It caused a lot of anxiety (even with my Mindfulness practice), but eventually I did my research and discovered what my RO knew all along - that bounces are a good thing (in the rear-view mirror!)

As always grateful for your feedback. Always had BPH and PSA has for years bounced around so we need to remember that plays a role in this too.

It takes time, but my prostate shrank from about 60 cc to about 25 cc. I never get up at night to pee anymore and have a strong stream.

Great news to hear the prostate shrinks. Peeing is better at night now. Got today's 6 month PSA results post SBRT. Pretreatment it was 6.68 now 3.10. I think that's ok. Only concern is PSA Free was 20 now 14. What role does the PSAfree play post rads? However that bounced around too pre treatment.

Free PSA is meaningless now and should not be ascertained.

Good to know. Is 3.10 considered ok 6 mo post? That would be half hopefully to trend down.

Sounds good to me!

You said your PSA went down by half at 6 mo. too. What was yours at 6 mo. and do you recall your first PSA? Doc was ok with my PSA 3.10 at 6 mo. post SBRT however he would have liked to see it lower but hoping it trends down in next 6 mo. Everybody I read has a PSA under 3 some much lower at 6 mo. Makes us uneasy. Should it have been at 1 or 2 already? We mentioned we read some go down slower and doc just said the biggest drop is usually the first indicating better control outcome. Thoughts?

It is highly variable and there is no prognostic info in an individual's pattern. You're in it for the long haul.

45RPM in reply to Tall_Allen

TA curious are you still taking flomax after all these years to get that strong stream? If not, when did you stop after your SBRT? TIA.

Tall_Allen in reply to 45RPM

I only took flomax for about 2 weeks after SBRT. Then, 1 year later, I had some urinary symptoms for which I took Rapaflo. Maybe for a month - I don't remember exactly. That was 9 years ago.

ODave in reply to 45RPM

I had the pills for after SBRT. I did have some hesitancy but I never did take the pills, stubborn I guess. After a few weeks it was kinda back to normal. That was in Sept/Oct however this last week it’s started back again and that full feeling you get down there when you sit.

Ha — Nice. I know it well and I hope to finally be down into the 1’s in one year and even lower in two. This looks exactly like my graph but only I am two years post HDR brachy mono treatment. I wish I had this graph to study for my first 18 months. I bounced from 1.7 to 3.7. No matter what they told me about bounces being good it was hard to get a settled and feel confident about the situation. Especially when I was trending up and then up again. Just at my 2 year, I finally had a 1.5 drop, which makes me feel a lot better. Now seeing this makes me have something to really look forward to. Thanks for sharing & very happy for you and your husband!

Did you have ADT also? If not, isn’t psa a naturally variable thing? All sorts of things can affect psa.

Glad to hear your PSA is so low.

to surgery. The highest Gleason number was 7. My PSA was 23 prior to the biopsy. Surgery was...

PSA and NLR after RP. What to make of these numbers?

My first PSA after EBRT

What kind of score when I get my 6 month followup PSA after 45 sessions of EBRT?My previous score...

I have enclosed my historical PSA...

What ADT duration would you use?

Whole gland TULSA-PRO outcomes: Is it time to give up on the...