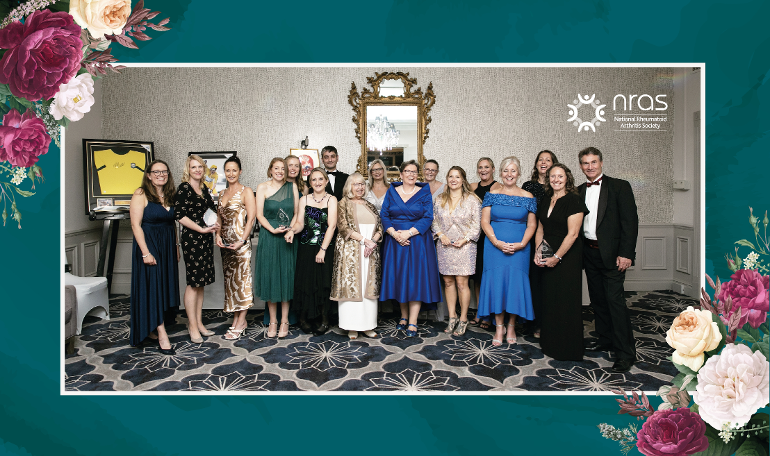 On 9 September, we held our 21st Anniversary Gala Dinner and NRAS Champions’ Awards.🏆

Following the news of Her Majesty’s passing there was much deliberation as to whether to proceed or not. The decision was made to proceed with a tribute to Her Majesty and a scaled-down event enabling NRAS to acknowledge the NRAS Champions from across the nation.

It was a significant milestone in the history of the charity and celebrated the amazing work of our NRAS Champions,’ who were nominated by individuals living with RA or JIA.To read more about our NRAS Champions’ visit👉 bit.ly/3BDrOSL

Aribah-NRAS
Partner
To view profiles and participate in discussions please or .
8 Replies
•

So incredibly proud of all the amazing Health Care professionals and Volunteers who were nominated for a Champion award and these brilliant people who were judged as winners.

Well done everyone on such great work.

p.s. I think the Queen would have wanted people to carry on.

Might be my eyes but has that lady 6th from the left had her walking stick photoshopped out?

I mean….it does look like a distinct possibility from over here, too 👀 Having zoomed in, it’s either that, or she’s mid pointing at something on the carpet. Very definitely a once seen cannot be unseen thing, though 🫣

I suppose it’s possible she can’t straighten her elbow too. Hopefully the lady is here and can clarify. Maybe I’ve got too much time on my hands 😂

NRAS can confirm no photoshopping out of a walking stick occurred. It seems this was just one of those times where the shutter went and captured someone mid movement.

You had me curious too!

access to treatments. Who knew that 15 years later her amazing fortitude, passion and commitment to...

minutes and vote for our amazing supporter Ruth Archer in the Mountain Warehouse Charity Challenge!...
•7 years ago
13 Replies

say I've just come off the above. Mmm feel for NRAS but really was not good in my opinion. Also...

Holiday travel delays - how do you cope?

Covid Boosters - Will I get another soon?