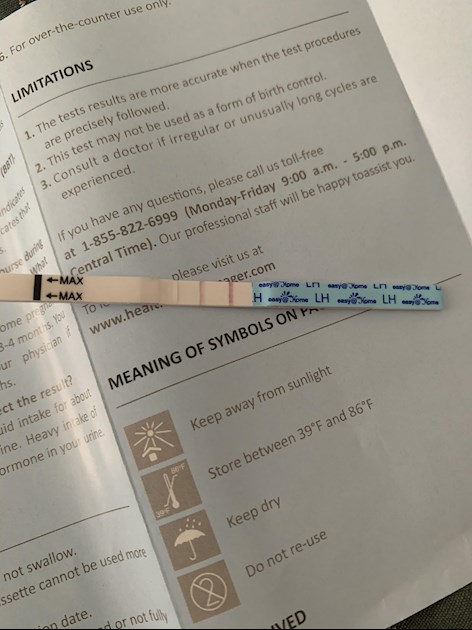 Can you get a positive ovulation test and be pregnant? Here is my test I’m 8 days late and still nervous about taking a HPT.

As far as I'm aware ovulation tests check LH (luteinising hormone) which spikes in ovulation. Once someone is pregnancy LH tends to be low as progesterone and oestrogen increase and negatively feedback. So in answer, no I dont think it would happen. However if you are late you should probably just take a pregnancy test.

Yep, absolutely -that can happen, and it did to me. The pregnancy and ovulation hormones are molecularly similar, so you can test positive for ovulation when pregnant 😊

Definitely can, for my first pregnancy I was only a day late but usually like clockwork with no sign of the usual period symptoms I would suffer so used an ovulation test after doing some googling and getting curious if it would work and it came up positive. Got a pregnancy test after that which was also positive. Good luck!

monredb in reply to RI90

Can you get a positive opk if you are 13 days late?

been 13days and still hasn’t came I had a few opks left so I said what the heck! I’m almost certain...

picture in here to get peoples opinions and a couple of people said it looks like a faint positive...

Faint positive not getting darker

Can it be false positive

Any suggestions, can I get a clear false positive?

Can you learn to drive whilst pregnant?

manvouer. My question by law can I still tyk drivin lessons and my test whilst pregnant? Plz sumbdy...