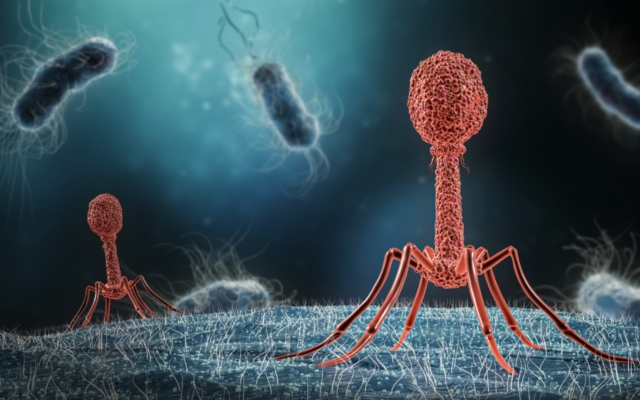 Illustrative image: Viruses, known as phages, infecting bacteria. The Weizmann Institute has developed pages which it says could counter harmful bacteria in the bowel. (libre de droit via iStock by Getty Images)

Israeli scientists are working to develop a “precision weapon” against bowel disorders consisting of viruses that fight bacteria.

Two different virus “cocktails” have undergone Phase 1 clinical trials, with initial results indicating that they are safe, and extensive in vitro and animal testing suggesting that they fight bacteria.

Peer-reviewed research, published in the journal Cell, states that the virus effectively reduced the count of Klebsiella pneumoniae, a bacteria that is found in large quantities in the guts of people with Crohn’s and ulcerative colitis.

“To our knowledge, this constitutes the first ‘silver bullet’ approach promising a precise suppression of disease-causing gut microbes, without harming the surrounding microbiome,” said Prof. Eran Elinav of the Weizmann Institute of Science, who headed the research team.

The idea of using viruses in medicines to fight bacteria — known as bacteriophages or phage therapy — isn’t new, and was intensely researched in the early 20th century. However, before any significant successes, antibiotics were invented and attempts at clinical uses of viruses were largely abandoned — though scientists continued to use phages in laboratory settings.

Today, there is a resurgence of interest in possible phage therapies amid concerns about antibiotic-resistant bacteria. Some researchers have suggested that they may present a solution to the problem, and several phage therapies are in development, though none are in widespread use.

The Weizmann project began with scientists analyzing the microbiome of individuals with Crohn’s and ulcerative colitis to see which bacteria it would be helpful to fight.

Dr. Sara Federici, a member of the research team, told The Times of Israel: “We screened four different cohorts of people and found a bacteria present among people with Crohn’s and ulcerative colitis, Klebsiella pneumoniae, and decided to target it with bacteria phages that don’t harm cells or other bacteria. In other words, with bacteria that are super specific.”

Federici said that the team “identified viruses — or phages — that had potential to fight the bacteria, and tested them against bacteria in vitro, and then in mice with Crohn’s and ulcerative colitis.” From those results, she said, “we were able to see which of the viruses were most effective. We then chose the best viruses and tried them on a lab device that mimics a human gut, and had good results.”

In the latest development, two virus combinations — or “cocktails” — were treated in a Phase 1 clinical trial. “Study participants took the phages for six days and there were no adverse reactions,” said Federici. The phages persisted and even multiplied in the human intestines over time, while causing no unwanted changes in the rest of the gut microbes, she added.

The phages will now undergo further clinical testing, to see whether they fight bacteria and benefit health in a real-world setting.

The Weizmann researchers hope to develop them into drugs that either treat Crohn’s and ulcerative colitis or possibly avert the diseases among people who are assessed to have high levels of Klebsiella pneumoniae.

“Our vision is to eventually develop personalized therapies for a variety of disorders,” said Elinav, “in which the disease-causing strains of gut bacteria will be identified in each patient and a phage cocktail will be designed to kill only those strains.”