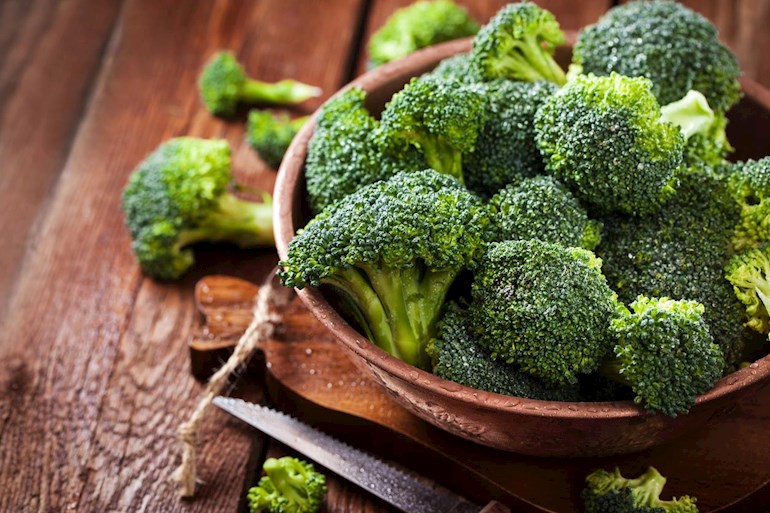 Broccoli, a common source of Diindolylmethane (KateSmirnova via iStock by Getty Images)

Israeli scientists say they have used a natural chemical to make pigs’ wounds heal twice as fast as they otherwise would. They hope to be able to develop the substance for human use, and claim it could also become “an antibiotics alternative of the future.”

Diindolylmethane (DIM) is found in broccoli, cauliflower, and other vegetables. A Ben Gurion University research team studied its impact on bacteria in lab conditions, and found that it harms their ability to function.

Prof. Ariel Kushmaro and his colleagues published their findings in the peer-reviewed journal Pharmaceutics, and are working on developing the chemical into an ointment for animals. They are also exploring whether it has health benefits as a food additive for animals.

“What we saw in our experiment was that wounds healed faster when treated with DIM,” Kushmaro told The Times of Israel.

They also saw why.

The team’s long-term aim is to test DIM on human wounds, and help to launch a new approach in human medicine. Kushmaro said his research is exciting because of the mechanism it illustrates. “This is a game-changer, and a novel concept for antimicrobial treatment,” Kushmaro said.

He added that while the approach is totally different from antibiotics, it could become a staple of the fight against bacteria in the future, as antibiotics are today.

DIM interferes with communication between bacteria, akin to signal jammers that interfere with radio or cellphone communication. “Bacteria ‘talk’ to each other using chemical signals, and by blocking or jamming this communication you’re isolating each bacterium so it’s alone,” Kushmaro said.

“This communication prompts bacteria to express virulent genes, and when they’re not doing this they become less virulent and more vulnerable to antibiotics and to the immune system.”

Illustrative image: a scientist examining bacteria in a petri dish (SilverV via iStock by Getty Images)

There is growing interest internationally in the potential of inhibiting bacteria by harming communication, and Kushmaro said he is optimistic that his research will make a significant contribution.

Kushmaro and his colleagues, including Dr. Karina Golberg and Prof. Robert Marks, hope to have a product approved for animals within five years. DIM is already used in some cancer treatments, but a brand-new use will take time to develop and receive approval for, so Kushmaro believes it will take more than a decade before any product can be developed for humans.

In the long term, however, he is very optimistic about its potential.

“This idea of jamming the communication between bacteria in some way has more promise than antibiotics,” Kushmaro said. “This could be an antibiotics alternative of the future.”

lupus-support1
Administrator
To view profiles and participate in discussions please or .
Read more about...
1 Reply
•

What an amazing alternative to traditional antibiotics/ de breeding issues.

With the ulcers that can plague APS patients, this is very welcome news!

As always, thank you for your unique finds new research!