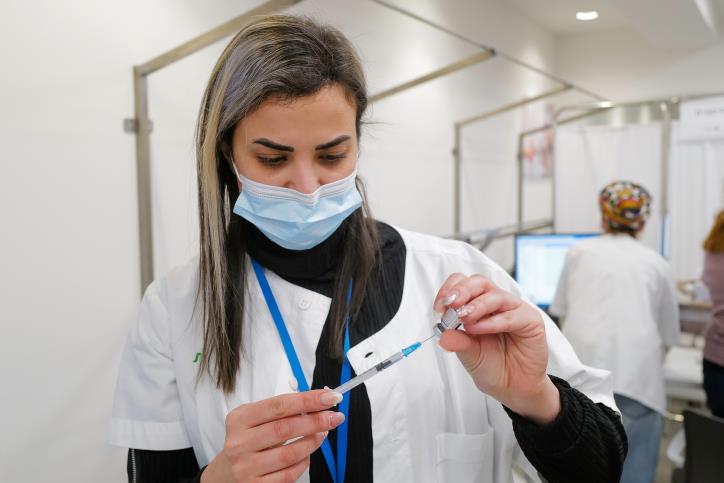 A health worker prepares to give a dose of the COVID-19 vaccine at a Clalit Health Services center in Katzrin, Golan Heights, January 9, 2022. (Michael Giladi/Flash90)

Fourth COVID-19 vaccine shots have provided a 72 percent reduction in death rates among the most vulnerable Israelis, according to new peer-reviewed research.

The finding comes from a large Israeli study that analyzed data on elderly people in care homes who received four shots, comparing them to those who only took three. It was conducted during last winter’s coronavirus outbreak, which was dominated by the Omicron variant.

The fourth shot of Pfizer’s vaccine slashed the chance of hospitalization for COVID by over 60% and delivered a 34% reduction in chances of infection, according to the study, which was conducted by Tel Aviv University, Ben Gurion University and the Health Ministry. It was published in the journal, JAMA Internal Medicine.

“The most important message here is that the fourth dose was protective for the most frail elderly people who are in residential facilities,” epidemiologist Prof. Khitam Muhsen of Tel Aviv University, one of the study’s authors, told The Times of Israel. “Fourth shots reduce hospitalization and death — they’re lifesavers.

“The results are very good and very reassuring, especially as, before the fourth dose, we didn’t know whether it would help, especially against Omicron which is so much harder for vaccines to fight, as it has so many more mutations than previous variants.”

Muhsen said that the results vindicate Israel’s decision in December to administer fourth doses, also known as second boosters, before most others around the world did.

“They confirm that the policy adopted by the State of Israel was the correct one,” she said. “The decision to vaccinate at-risk populations with the fourth dose was a wise choice that saved a lot of human lives.”

The study covered some 40,000 elderly Israelis who live in institutions supervised by the Ministry of Health’s Senior Shield program, a task force launched by Israel’s government to oversee the prevention and control of COVID-19 in the country’s geriatric facilities.

It compared 24,088 residents of Senior Shield facilities who received a fourth dose of the Pfizer vaccine, with 19,687 residents who were vaccinated with the first three doses four months or more prior to the follow-up, but who chose not to take the fourth shot.

Muhsen commented: “What we learn is that while immunity wanes over time, the fourth dose does enhance neutralizing antibodies over and above the impact of the third dose. I strongly recommend that elderly people take the fourth dose.”