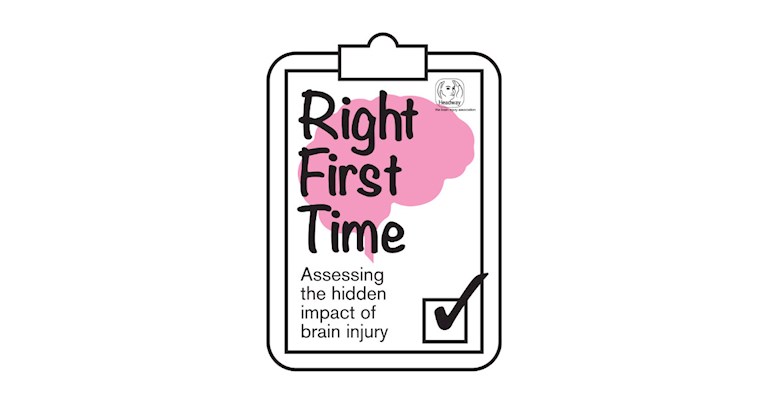 We've just launched our new Right First Time campaign, calling on the government to bring in changes to the disability benefits assessments which currently fail a large number of brain injury survivors and their families.

Using your feedback from our survey, we found that:

- The system largely focused on the physical impact of having a disability, neglecting other elements of disabilities.

- 76% and 77% of respondents felt that it was difficult to explain the effects of brain injury on the application form for ESA and PIP, respectively.

- Assessors were found to be lacking in this specialist knowledge. 71% and 60% of respondents felt that the assessor for ESA and PIP, respectively, did not have an understanding of brain injury.

- Assessors were widely reported to lack empathy and patience.

- A significant number of respondents commented on the fact that their medical evidence was not taken into consideration, and that the assessment environment was not suitable for them.

Based on our findings, the Right First Time campaign is calling for:

- Specialist assessors are needed, who have an expert knowledge of complex conditions such as brain injury.

- To build more trust, we need a system for recording and confirming consideration of third-party evidence by assessors and decision makers.

- Applicants should be offered the option for an audio or visual recording of the face-to-face assessment. They should not have to make special arrangements or provide their own recording equipment for this.

You can find out more about the campaign and read the full results of our survey at: headway.org.uk/get-involved...

Fantastic news and the points addressed are what's needed.

Interestingly before the new provider,Centre for Health and Disability Assessments, was ready to take over ATOS's role some NHS PCT were contracted to do the medical assessment and the feedback was much more positive in that:

• The Health Care professional had specialist knowledge of the particular disability.

• The assessor was friendly and considerate.

However one important issue is the medical member in a Welfare Benefit Tribunal, as they are frequently GPs and in my experience potentially detrimental to a positive outcome.

They'd probably do a better job!!

However they haven't been prosecuted for discrimination and had a claim for financial fraud in The U.S., so not eligible to submit a bid!!

Can I also suggest GP's are trained in asking a select sheet of Headway questions to assess if their patient has or is experiencing a brain injury and not realising it? Perhaps work with the Kings Fund in London who do leadership development in the NHS to see if a few specialist's couldn't cobble a list together with Headway having the final say based on comments from real brain injured people! If you need a volunteer to help get this in motion, happy to help.

Judging on folks online and in real life, it’s a harrowing experience that you often have to do many times.

I’m too high functioning to claim at least I assume any how.

In short I approve!

Are you going to instigate a campaign that challenges and alters the in-adequate questions social services ask those with invisible acquired brain injuries when doing assessments?

In the current set of questions, fatigue isn't covered, the ability to manage, organise plan and prioritise is not covered, there is no awareness/ mention of how debilitating fatigue is. Mood swings or depression are not addressed. The current questions are stupid and do not reflect the fluctuating nature of 'functioning' or, on some days, not functioning at all, with a brain injury. The current set of questions are very troubling.

Look forward to your reply.

headwayukAdministrator in reply to bonfire

Many thanks for your message.

This is certainly very troubling as you say, and seems a real barrier to people getting the social care they need. It'd be really interesting to look into the situation across the UK to see if some areas are better/worse than others. If there are examples of the assessments being done well, it could really help push for improvements elsewhere.

We're working on a couple of campaigns at the moment (Right First Time and our Action for Brain Injury Week campaign in May), but I'll discuss with my colleagues and see what we can do.

Thanks again - would you be happy for us to contact you if we decide we can take this forward?

bonfire in reply to headwayuk

Yes you can mail me if necessary. I’m sure other folk on this forum would also be interested in putting their views /experiences across.

Maybe you could issue another survey as with the previous campaign?

sealiphone in reply to bonfire

Do you have a copy or a link to the questions, as it would be interesting to assess how bad this is in your area.

It's going to be very dependent on funding but I know Headway groups who have been able to address local issues like this.

David2019 in reply to bonfire

Alright bonfire I had a blasted ATOS review in 2016 the WOMAN SAYS NOT NOT toworry about my enhanced rate of PIP for mobility, she leaves and BANG GRRR I got docked about 200.00 odds amonth or something else like that 😢 talk about being screwed over 😢 I had to go-to the hospital and get a Drs letter saying that I walk with a walking stick and had to get my carer's tell them the TRUTH that the STICK comes EVERYWHERE with me what the ABSOLUTE ACTUAL HECK man! They must work to targets orsomething else like that 😢 the WOMAN NEVER had a CLUE! And I NEED the ENHANCED rate of PIP for mobility As ineed my bus pass as the DvLA have TOTALLY revoked my CATC+1 and full basic grrrrr soineed need need my buspass.

For my ESA assessment I was assessed by a physiotherapist and I’m pretty sure I knew more about medicine than her.

Wiltshire in reply to spideyman

You know lying on forms to stop people getting paid is Fraud. I reported them to the Police over the lies on my assessment. It went no-where. No surprise there.

They sent a Paediatrician to examine me in my home for the effects of my brain injury. I am 55 Years old, not a child He put in his report that the effects of the injury would not have lasted longer than 3 months. The accident involved driving a van then a sudden stop between 30 -40mph on crash.

My accident was in 2002, I was diagnosed in 2005 by Professor Pepperkamp at Andover Hospital. They lied on their forms and they were was countersigned by another GP working for the DWP that had never even seen or spoken to me. That got Industrial Injures refused. On the appeal they refused to bring the medics into court and I just gave up. It's too much to deal with when you have severe motivation difficulties.

It all goes from one extreme to the other including some charity works who are supposedly capable of understanding brain injuries!!! I have no way of getting help from Nhs because one doesn’t understand the other eg neurologist verses psychiatrist!!! I have been diagnosed with boarderline personality disorder or boarderline autism by another!! This was diagnosed 15 years after brain injury to have been me before brain injury & as I say they’re not decided which it could be by supposedly professional highly paid Nhs workers. Then I see a neurologist who pushes me back to mental health who then push me back to neurologist!!! They say they have done all they can within a certain time, mental health social worker is who has said this. She has also claimed you can do this you can do that but I have had no proper helping to help me improve my life. I am still where I was 2002 when I was discharged from hospital!!! But now I have to pay to get help £115 per week!!! Contradictions are the human race more & more, my paranoid thought pattern started the day I woke after brain injury and hasn’t improved since. Benefit wise I am only getting Pip because I got help from a lass who knew about how to find what exactly the government are asking, what is asked on the form is not exactly all the information that can be put on the form!!! The lass who assessed me after I had to reapply was as nice as the first person who assessed me for pip. Last time I was awarded pip straight away and so I thought I was the second time as got a letter of approvement a few weeks later, but then two days later got a letter on posh paper saying I was not approved!?!? This letter was not even properly written or with all the information required!?!? But had help for appeal & was awarded about a month later with backpay too. I am also basically terminally ill due to one medication being prescribed which has damaged my liver irreversibly and the chemical being released from liver can lead to pancreastitus, which I have been told can lead to terminal illness!?!? Be a person who has more wrong which cannot be seen is treated like some kind of scum. While everyone who is paid to help, protect, care etc is usually the ones least trustworthy!!! From drs to police to care workers to nurses etc

Really sorry to hear this, what a hugely frustrating situation. Please don't hesitate to contact us if you need any support - you can get in touch with our helpline on 0808 800 2244 or helpline@headway.org.uk

Thank you very much Andrew. I don’t think anything will help anymore than you peeps have already. Really have had intelligent help from you all & proper understanding. Just everyone else not as helpful, in some aspects messing my mind up more!!!

PIP and ESA: Are they working? Take our survey to share your experiences

Click the link to find out about our campaign and take...

How the times have changed

her with a shrunken cerellebum (the part of the brain which controls balance I f I recall...