Not been diagnosed as gluten intoller... - Gluten Free Guerr... 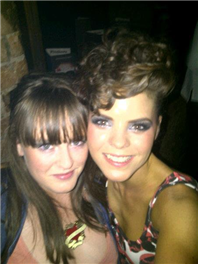 Hi everyone it would be great to get feedback off some of you about this! I havnt been diagnosed as gluten intollerent but before i took gluten out my diet theses were my symptons: very loud stomach noises, very embarrasing wind, an issue of needed the toilet about 20mins after eating, going to the toilet 6 times a day was normal, not being able to remember the last i had a solid bowel movement, ulcers all over my mouth and very prone to catching infections. So i never got constipation and i seemed to react to bread,pasta etc and guess what now i've cut gluten out i go to the toilet once a day and there more solid than what they used to be

and i dont get the embarrasing wind! Im happy and i've fell in love with the warburtons gluten free range its amazing taste like the real deal!

Coeliac disease produces similar, but usually over longer timescale and is also accompanied with lack of energy, Irritable Bowel Syndrome, bloating and depending on the person, some get joint pain, headaches, vomiting, or a skin condition called Dermatitis Herpetiformis.

tug_6 in reply to meanioni

i agree 100% with meanioni. as soon as i read "ulcers all over my mouth" it made me sit up. I don't kknow if others agree with me bu i would ask the doctor for a second opinion and make sure you eat a "normal" diet (i hate that phrase)

Violetblue in reply to tug_6

my dentists suggested I ask my GP to do blood test, as I also had ulcers all over my mouth, I also thought I had IBS and was so shocked when coeliac blood test came back positive.

Sounds similar to myself, I was told by my doctors I had IBS and given various medication to try to ease that but it did not help. Then out of my own decision I took an allergy self testing kit from YorkTest. The results came back that i react to gluten and yeast and since cutting them out I feel so so much better. People can be suspicious of this method of testing, but for me it seems to have worked and after being ill for a year I was ready to try anything, so perhaps this mght be a good next step for you.

Hi Vicky 1986, I would advise that you still keep an eye on symptoms that may develop. Every individual case of either coeliac disease, gluten intolerance and gluten allergy varies widely from patient to patient and it is important to realise that symptoms may become more widespread and often worsen over the years.

I would strongly urge that you request to be fully tested by your doctor to confirm diagnosis and they may ask you to return in the future for re-testing if nothing can be confirmed in your initial blood test.

If you have, by choice, decided to follow a gluten free diet then try and increase the number of gluten free grains within your diet such as quinoa, millet, brown rice, etc - to top up on vitamins and minerals. Remember that gluten may also be found in many guises and is often packed within foods in the form of grain syrups - avoid dextrose or dextrin and maltodextrose or maltodextrin (these may be wheat or barley based and thus they are a concern on a gluten free diet).

I am not sure of the amount of information you may have or what you have been advised so far regarding the symptoms you have been experiencing. I have therefore attached a site that has an all round explanation of further symptoms to look out for

Vicky just been through this process, but I am thankful that my doctor is more thorough than most. Have you had any tests done by your doctor? I understand from the specialist I saw that the only way to "diagnose" IBS is to eliminate all other diseases. Not a very pleasant process in parts the first should be blood tests and then if those are negative there is a colonoscopy. I found it very helpful to know it was not anything else and there is a very helpful group called The IBS network who can support and give advice. It is important to realise given that they are all very similar symptoms that IBS can get worse by more substances being involved like dairy (sometimes lactose intolerance). The medical profession make great distinction between allergy an intolerance. Some people would say there is no test for intolerance rather for allergy but there is one for coeliac disease because some people produce an antibody which is detectable. There are other groups to help if you have other diseases. I would agree with the netdoctor that it is advisable to have the tests done. Hope this matter is quickly resolved. PS it might be helpful to try oats (there is a gluten free version) to control the wind.

Sounds more like a sensitivity than an intolerance, Intolerance means that there's a medical cause for it like Coeliac or Chron's. You need to get these ruled out by a doctor if you haven't already.

IBS is a 'syndrome' which means it's basically a catch-all for bowel problems that have no obvious cause, you could have IBS AND be Gluten Sensitive but you could also have a gluten sensitivity that give you IBS symptoms (annoyingly chicken and egg isn't it?)

If you've found something that works, keep it up

i can help with the bowel movements (well it worked 4 me) Greek yogurt, once a day with your breakfast, keep eating it until you start getting heartburn then every other day (will take about a mth to build up) but will only take a week or so before you start seeing an improvment, i just did it, feel a lot better.. makes sense when you think about it, everything goes in your stomach so if you haven't got enough good bacteria in there, it's gonna cause problems.... good luck...

Vicky a GF diet is for life and so I'd only commence on it if I was 100% sure it was necessary. From what you say it doesn't sound like the Dr has ruled out other gastro problems or IBS. As another member stats IBS is only a diagnosis when other illnesses have been ruled out.

I'd recommend going back to your Dr. The symptoms you describe are ones that people with Coeliac Disease have and are also similar to other gastro conditions. Your Dr can advise on the best tests to rule out other problems rather than just recommending you're gluten intolerant and go gluten free.

FYI NICE guidelines in the UK state anyone with 'IBS' should be screened for coeliac disease before being labelled with IBS. If you have anyone in your close family with another auto-immune disease then it's worth mentioning that to yr Dr as that can indicate auto-immune problems run in the family and help them to consider the coeliac blood test.

Let us know what happens and thanks for posting.

Hi Vicky the same thing happened to me, I had loads of symptoms similar to you, had my endoscopy and colonoscopy and was told by a rather obnoxious gastroenterologist I should be grateful I do not have cancer, ulcerative colitis or crohns disease (although I do have microscopic colitis which untreated can lead to ulcerative colitis and the treatment for microscopic colitis is a gluten free diet!!!). He also said if I wanted a "label" it would be IBS.

I was referred for a 2nd opinion and had my appointment on Thursday, the new gastroenterologist was fab, I'm lactose intolerant and either gluten or wheat intolerant, he's took bloods to do a RAST test to see whether its gluten or wheat I'm intolerant too, I've to go on a gluten and lactose free diet and go back and see him in June. Good luck with your diagnosis and don't be scared to ask for a 2nd opinion.

Hi, I have lack of interest with gastrologist. Waited months to see one. all he said was I was on emergency for colonoscopy and no interest or advice. After 7 month wait and no advice, failed colonoscopy as sedation had no effect and nurse advised him to stop twice. Lost 18lbs weight. wasnt up to having virtual scan a week or so later so since colonoscopy no news. Sent a letter to hospital today asking if he had abandoned me. npt that he showed intrest anyway. I was diagnosed ceoliac Jan 2007 but wasnt given info until I paid £50 for hosp info when I came across report. Changed gp was then treated in Dec that year. Trouble with maybe I.B.S 2010. On strick gf food. How come you got another gastrologist. At manchester hospital but never get info from them ever after asking and contacting PALS. On protem pump now at my request Rabeprazole 20mg which is of somehelp. So even though am diagnosed coeliac have maybe later developed I.B.S.

I'm a coeliac and have been for 3 years. I know what your experiencing, however you can do a stool sample and ask your doctor for it to be tested for coeliac will take round about a week.

Hey Peanuts - if you wanna troll people - try annoying some Daily Mail readers somewhere instead of picking on our members.

Been told I am gluten intolerant after 25 years of tolerating it just fine.

been completely gluten free, hating it but doing it. 2 weeks I have been off gluten and I still have

Not diagnosed but been gluten free for 2 months

from choice to go gluten and wheat free after always suffering from IBS symptoms, wind and...

A question for those who are self-diagnosed gluten sensitive.

clearly doesn't believe there is such a thing as \\\"gluten sensitive\\\". So I ended up without...

So confused, been glutened

few days ago I ate alot of gluten full food (pizza that I was told was Gluten free but they gave me...

What Happened to Wetherspoons?

Why I get angry - The Alpro Example

Seabrooks Crisps- Hands up if they make you ill