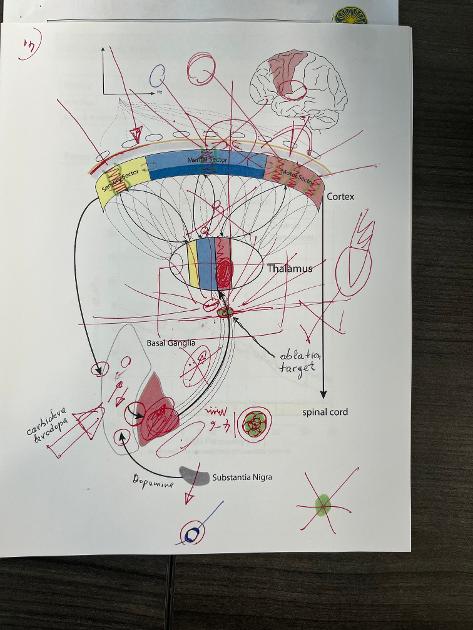 I'll attach few pictures about FUS and also my EEG.

See the 1st picture. The loss of dopamine in BG produces electrical signals disturbances in the Thalamus which are causing the PD symptoms. The dopamine is coming from Substantia Niagra (naturally) or carbidova/levodoba (artificially). When the BG is not getting enough dopamine through one of the two ways then it generates electrical disturbances in the Thalamus. These signals are of certain amplitude and frequency (low frequencies being 1-13 Hz and high frequencies being 13-100 Hz as seen in the second picture (green being the normal) and red the abnormal (for myself). So in my case the biggest disturbance is around 5 Hz (see picture 4, too, showing the difference between the left and right hands in my case or picture 3 showing the two brain's hemispheres differences).

The FUS interrupts the "cable" between the BG (Basal Ganglia) and T (thalamus) to eliminate the disturbances source(see 1st picture). As a result the dopamine becomes irrelevant for that side. The brain is reassigning a different pathway after FUS to replace the interrupted one. For that to be possible the patient should be emotionally and cognitive stable.

As the electrical disturbances are completely eliminated for ever then the symptoms should be eliminated, too.

ion_ion
To view profiles and participate in discussions please or .
Read more about...
33 Replies
•

Excellent explanation. Thanks a lot

It may be true that "As the electrical disturbances are completely eliminated for ever then the symptoms should be eliminated, too." unless as you say, "The brain is reassigning a different pathway after FUS to replace the interrupted one."

My guess is that in some tremor and other symptoms won't return and in some, some symptoms will return.

Theoretically no, but practically is hard to be sure as the brain is a very complex system.

Did he talk about short term risks? How many people come out of it worse than they went in?

Very few. Where it is government approved, Switzerland, I've heard of possibly 1 out of several hundred. Much better (adverse event record) than any drug trial or procedure.

Is that what DJ (or his staff) said to you about it?

No, it's my reading of what he has published. You sound doubtful?

No, im just specifically interested in what he tells prospective patients.

Did address the risks with you (short term or otherwise)?

Yes, we met for 2 hours and questioned him closely. I believe him to be truthful.

So what did he say the risks were?

Hi, can you supply the details of where you had the FUS treatment please?

MBAnderson in reply to Bluebell2022

Why do you have to be emotionally and cognitively stable? Aren’t anxiety and depression a couple of symptoms common in PD and if that is the case are those people not considered as candidates?

Depends probably on the severity, I believe those would still be considered.

If you are interested in this procedure, you should not rely on us to say who would qualify, but you should be in communication with the clinic.

Dr. Jeanmonod has been operating on this target or 20 years using stereotactic radiosurgery previous to FUS.

It is not yet FDA approved in the US, so no and when it is approved, to be clear, some doctors will do it as well and some will not.

All your questions are answered here.

It probably makes sense to go to the source in Sonimodul if you can $wing it. The Chicago piano man video, what exact type of FUS did he have done & main difference from your procedure. You have explained this to me before and I apologize, but for some reason I'm just being very thick on this topic but want to get it right as I might be moving faster in this direction.

This is clearly the best site with the best people anywhere. Shame it's not a more fun topic...

PTT will likely be approved in a couple years and, if so, will be covered by insurance.

Last one and then I'll leave you alone. If not yet FDA approved in States and it's the same procedure as Sonim, where & how did Von have it done, was it part of a clinical?

I can wait, but 15 years in, I probably have tweeked things about as much as one can-medicin-wise. Still playing competitive basketball at age 63, but coming off sports hernia which put me on the shelf for 3-4 months where condition definitely got worse, who knows what's in store. I wouldn't mind being a little more comfortable and ease the tremors a bit.

You are doing very well for being 15 years in.

Yes, Von was part of a trial. All locations for the trial are now fully enrolled and are not accepting new applications.

I would not go for a trial except I would have nothing to loose. Sonimodul proved itself while the other places are still struggling. I asked dr. J why he does not open a clinic in USA; he said the quality is his #1 item and he won't be able to assure it with two clinics on two continents.

Apart from that the lack of it causes all these terrible symptoms, dopamine has other important and indispensable roles in humans."It plays a role as a “reward center” and in many body functions, including memory, movement, motivation, mood, attention and more." Source- my.clevelandclinic.org/health

I get that interrupting that cable bw the BG and the T stops all or most PD symptoms... But what of those positive indispensable roles of dopamine? That is why I don't understand your phrase "dopamine becomes irrelevant".

When I asked similar question in your previous thread, your just repeated your exact same sentence that forced the question in the first instance.... which dumbfounded me

If on the other hand you don't know, you could put it to the neurologist on your coming visit to SoniModul

MBAnderson in reply to Grumpy77

I don't mean to answer for ion, but I presume when he said "dopamine becomes relevant," he was referring only to it's role that signaling pathway.

Marc, you had surgery on both sides. Did you noticed loosing your motivation?

An another question: do they do the surgery in the same building where the clinic is located or another place?

No loss of motivation.

They do the procedure on the top floor while, as you know, their offices are on the 1st floor.

Grumpy77 in reply to MBAnderson

Thank you, your additional line helped me grab the picture

ion_ion in reply to Grumpy77

Dr J said dopamine is the main substance for the motivation. After cutting the cable the motivation is generated by the emotional system (that's why they operate only people with enough emotional and cognitive stability). He said the brain has enough power to stabilize itself through the post FUS auto tune process. In this situation the dopamine becomes irrelevant for that side. This is what I understood and makes sense for me.

Grumpy77 in reply to ion_ion

Now that you've explained with different wordings and angle... plus what Marc said, i now get what you meant. Thank you

been reading all the positive stories about PTT FUS. But I find it's always good to get both sides...

The 2nd FUS PTT procedure and me.

to be true, it will take several months for my brain to figure out exactly how to compensate for two

on-medication score ) Long term abstract on PTT by FUS is out. Can not access full article yet....