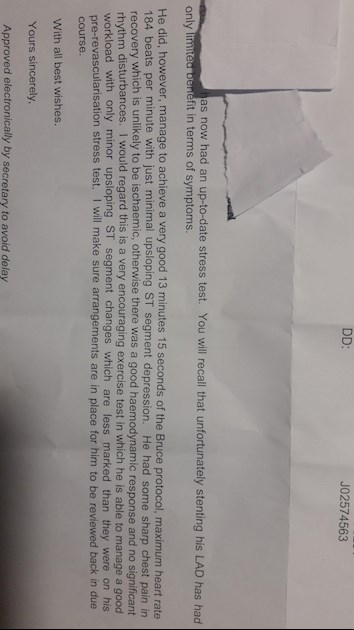 I've posted a letter from my latest stress test done on the 8th November.

I was wondering if any of you very clever people could kind of disect some of it and explain what's good or bad? I noticed there are some ST upsloping so any advice would be greatful.

Since I was 14 I've worked outside in some harsh weather! And often the last person to wrap up! Even up to March just gone before my heart issues began.

Now I'm at times in severe pain in this cold weather as soon as I take one breath of cold air as I walk out the front door..left of chest then middle of sturnum at times and then a dull ache...all the hall marks of angina!

Micro maybe? But still he's not listening and at night I get this and walking into a cold room..I'm absolutely gutted that now I have to cover my face so as not to draw a cold breath...after all the years of working in bad conditions and not a hint of chest pain..

I know it's angina so why is it taking so long to be recognised while I worry evetytime it may lead to something more serious.

Perhaps you clever lot may see an indicator in that carefully written letter.

For some reason at this very moment it won't upload letter. 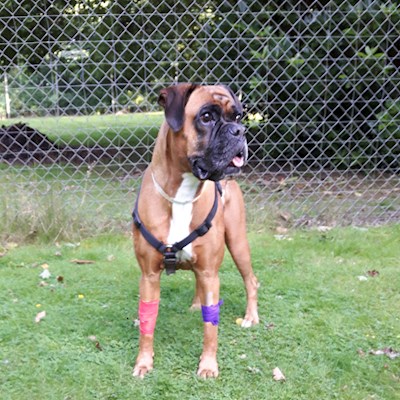 Rob6868
To view profiles and participate in discussions please or .
15 Replies
•

I'm an economist not a doctor, so take this with a pinch of salt! But here's my interpretation of this letter,

There was a good haemodynamic response and no significant rhythm disturbances...you handled quite heavy exercise levels well, with the blood moving freely through the heart and a regular heartbeat without any flutter or unevenness (such as for example you might get with Atrial Fibrillation).

The verdict seems to be that this was a good test result and consequently there's no action needed apart from another review in due course.

So ongoing pain is not worthy of treat ment?

Vasospastic and Microvascular angina are not the same as obstructive angina.

All the tests offered were developed to diagnose obstructive disease not problems due to either the large blood vessels intermittently constricting in a spasm or small vessels failing to relax or again constricting.

The BHF will in the New Year will be updating their information about Vasospastic angina with input from a leading BHF researcher and patient advisor.

I will post it as soon as it is published.

Still had my pain

I can exercise still get angina at rest.

I then had an angiogram when they injected acytelcholine into my coronary arteries and lo they saw ST elevations as ALL my coronary blood vessels went into spasm.

I was given IV morphine and nitrates.

It also reads that "contrary to what this patient had claimed the operation did not improve his symptoms, my tests indicated that there were marked improvements" but "happy to bring him back (because I'm such a nice guy )"- probably, he is. He didn't directly say that, but he detailed the findings to make his point, tactfully.

MilkfairyHeart Star in reply to Rob6868

Time for a second opinion!

Rob6868 in reply to Milkfairy

I always value your opinion especially as you are dealing with this on a daily basis and understand the sheer frustration of getting people to listen..

I thank you for your input

I know what I'm experiencing daily in the cold and at night while at rest.

It both scares me and halts me in my tracks and stops me doing a lot of things I did before my angiogram.

I believe I'm sitting here at risk especially at night when I'm alone and as I've said before...It's my body and I know what I'm feeling is not what I was feeling before I had my angiogram.

Yes they have stented my LAD but that DOESN'T mean my small arteries are not affected.

So yes I will look at the new research from BHF then probably grab that second opinion like you suggested milk fairy.

You know that I do admire you being vocal about how you are doing and remain very assertive. Nobody is doubting the way you are feeling. It definitely does seem to belong to one of the invisible conditions.

Good luck with your second opinion.

"I know it's angina so why is it taking so long to be recognised while I worry evetytime it may lead to something more serious."

I appreciate that you're frustrated with progress on a diagnosis. But I think that letter has good news regarding your worries that something "more serious" may be in store.

The UK mortality rates, amongst the two million plus people living with angina, varies from 0.9-6.5% per year.

0.9% is almost identical to the average UK mortality rate, so nothing to be concerned about if you're at that end of the spectrum. However, the other end of the angina mortality rate spectrum is concerning, especially once you compound those risks over two or three years. So where on that range are you?

The good news in your letter is that there was no problem detected in your blood flow rates, so no evidence of arterial blockages. That's important, as the really big risk factors that would push you towards the more concerning end of the angina mortality scale are evidence of blocked arteries, co-morbidities (ie other medical problems such as diabetes), and high systolic blood pressure. Given that neither you nor your doctor has mentioned co-morbidities or high blood pressure, that would seem to indicate that your personal risk levels are relatively low. I'm pulling this information from published work by Dr Chris Arden from Southampton, if you want to get to the original source data then you could google him.

Sure, you're still looking for a clearer diagnosis, and you're still frustrated with the impact on your life that your condition is having, but the positive news is there's no evidence to suggest you're at any particular risk of an imminent catastrophe. And if that gives you some small oasis of reassurance then at least it's something, even if it's not everything.

There is growing evidence that Vasospastic and Microvascular angina are not benign conditions.

Obstructive and non obstructive coronary artery disease both cause ischaemia. Not all heart attacks are caused by clots, plaque erosion or rupture.

Microvascular dysfunction is thought to be the underlying cause of these conditions and is associated with higher mortality and cardiac events.

The pain caused by vasospastic and Microvascular angina are well known to be more intense and last longer than angina due to obstructive heart disease and are very challenging to live with.

Many women describe the pain as the same as being in labour.

The BHF information leaflet about MVA outlines these points.

All BHF information is throughly researched, evidence based and the BHF uses expert patients and leading researchers to provide the most upto date and reliable source of information.

This is not just about the hard outcome of mortality it is also about morbidity and quality of life.

Pain whatever the cause is worthy of treatment.

"Pain whatever the cause is worthy of treatment."

I understand that, but for angina the question is treatment with what?

After the opioid crisis in the US surely no one in the NHS is likely to sanction the long term use of powerful pain killers for heart conditions.

Actually there are many patients with long term conditions taking morphine.

Because of the lack of access to Pain Management Services including a Clinical Psychologist.

More research is needed along with an acceptance that blocked arteries are not the only cause of angina or heart attacks.

"Actually there are many patients with long term conditions taking morphine."

I know that, my mother was one. For palliative care or temporary pain relief it's wonderful that we have access to such powerful painkillers. But turning people with chronic heart conditions into addicts, which is what long term morphine prescriptions do, well you've got to question if that's the right approach.

Morphine has it's place. I use it only when I am in hospital on IV nitrates.

It is a lack of resourses and knowledge that leads to this inapprioriate prescribing of morphine out of desperation on the part of both patient and doctor.

Some people have little access to or choose not to use alternative stratergies.

Those of us with difficult to treat pain are between a rock and a hard place.

I knew I had an approximately 60% narrowing in my LAD when I took my exercise test. I managed the full 21 minutes of the test with no angina, haemodynamic or ST changes so the cardiologist probably correctly assured me that my heart had excellent blood flow.

2 months later some plaque fell off and I almost died.

It's made me think that exercise testing is a bit of a waste of time and the reasurrence gained from getting a good result is meaningless in regards to the future.

Hiya rob know just how you feel. I have 2 stents from years ago,

Last few years been having angina am on meds for it.

They have just looked at scans and said there’s no significant changes,

Blood flowing ok, BUT blood going through small veins in sluggish so back for stress test after Xmas.

Really feel for you, we know our own bodies and what we feel like good luck hope you get sorted out soon

how did you find the care and treatment there. I'm heading there for Aortic Valve Replacement in...