Do you recognize this?: Pardon my bathtub photo... - Behçet's UK 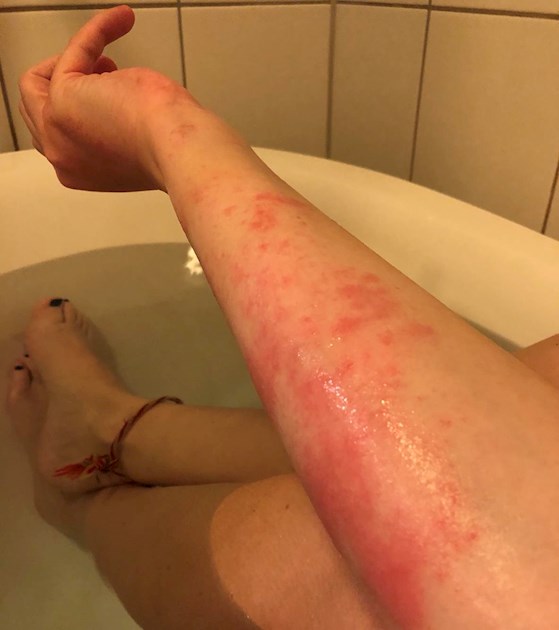 Pardon my bathtub photo shoot (the warm water works wonders for my pain so I tend to practically live here) but I’m curious to see if anyone recognizes this eczema? Its on both my arms and hands and itches like crazy.

Is it BD-related? I’ve seen my dermatologist and she told me I was allergic to gluten but when tested, turns out that wasn’t the case and I haven’t heard back from her since. So I’m asking around!

Thankful for any replies,

It looks a bit like psoriasis. Was that mentioned?

No, actually, it wasn’t... strange now that I’ve googled it. My skin isn’t dry like that and it’s not in any of the typical “psoriasis-places” but it does look like it still could be it? I’m not sure, guess I’ll have to get another appointment. Thanks for your help!

Looks sire too 🙄 what medication are you taking?

Stin4 in reply to gillianTS

gillianTS in reply to Stin4

Hi I had something similar and turned out it was a toxic reaction to Colchicine, Dr's would not do blood tests even though I said I was not feeling well and it was only when the rash came out and went mad on arms, legs, back, breast, itchy. Blood got tested hight in GGT levels (liver) over 300, normal range should less than 40. If you are getting this on an off or increasing dose or taking as an when maybe this is happening to you. I would seriously recommend getting a full blood test including liver function and kidney too.

ive had something similar- came out of no where and itched like CRAZY. figured out that i stripped my skin of natural oils and it just went crazy. it was on my upper back and shoulders, which makes sense from a shower. since youre living in the bath lately... could be something similar.

either way it remedied itself within a week, took a benadryl and used coconut oil to rehydrate.

i have the pic if you want me to send... i dont think you can send pics DM, so i will email if you want it

Stin4 in reply to rooser1

I’ve had them for a few years now, they’ve never itched before is the only issue :/ now it’s driving me INSANE haha. I’d love to see if you feel comfortable! korvenstina@gmail.com

rooser1 in reply to Stin4

did anyone ever take a biospy

Stin4 in reply to rooser1

She told me a biopsy would take place but I’m yet to receive any scheduled appointment :/ Sweden is not the fastest, hence why I have to ask kind strangers from the UK!

I know nothing about what it could be or what's causing it but just had a thought about what might help calm it down. Urtica cream is extremely good at helping with a lot of skin conditions. Its a homeopathic remedy but it might just help. I suggested it to my son in law who has eczema and it's calmed his skin down. Not sure if this will hrlp uou but thought i would mention it.yb

I have gluten and other food and environmental sensitivities that change. Tests don't show anything because it turns out I am IgA deficient. That means i don't produce enough antibodies to show up in tests but get a severe inflammatory reaction. I have not been tested to see if its permanent or fluctuating or involves any other immune complexes such as IgG, IgA, IgE etc. If it does it would certainly answer many of my conundrums regarding sero negativity.

If you can find someone to test you, may be a way forward but immunologists are rare beings apparently.

I get that all the time, usually on my arms. It itches and gets more inflamed if I scratch it. I usually put hydrocortisone cream on and it gradually goes away.

Yes. I get rashes like this on abdomen, back, neck, shoulders, thighs and inside the elbows. It arrives if I get a string of flares in quick succession. My rheumy calls it ‘pseudofolliculitis’ and says it is caused by dead neutrophils in the skin causing irritation. Apparently the inflammatory processes in Behçet’s can cause overproduction of neutrophils. I find it feels more itchy if it gets hot and is definitely worse after a bath. I haven’t found anything that fixes it but it does go away in time once the flares stop.

I am definitely gluten intolerant but nothing shows up in tests. I am not religious about avoiding traces of gluten and prone to nicking the odd bite of someone’s cake here and there. I suspect there is a connection with the skin rashes. They do seem worse the less careful I am.

It looks like the rash I used to get from gluten. I have celiac disease it’s not always cut and dry to diagnose. Before diagnosed I was always in a lot of pain

Do you live in Northern Ireland and have Behcets?

anyone who has helped. I know I am not the worst case but this disease is getting me down.

Do you have lots of pain in the small bones of your hands and feet?

Behcet's how do you cope

Do you have symptoms prior to a flare?

have a flare? How? And what are you feeling?

Also, I’m currently in a lot of pain in my nether...

How do you cope with the acute headaches?