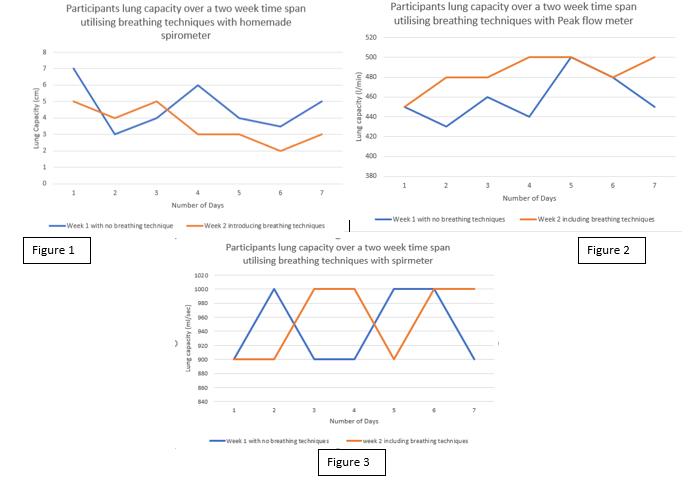 I am sufferer of asthma, and it has been brought to my attention whether the effectiveness of specific breathing techniques could assist in increasing lung capacity.

I have found that healthcare professionals and asthmatic sufferers have different opinions and scientific evidence from experiments about the effectiveness of breathing techniques with the goal of improving asthma. Therefore, I decided to conduct my own experiment as there is limited evidence to back up the statements about breathing techniques benefiting asthma. I constructed an experiment in three different ways to measure lung capacity, including a homemade spirometer, a peak flow meter, and a spirometer that the Women’s and Children’s Hospital in South Australia had recommended. The peak flow meter and the spirometer are effective and reliable as health care professionals utilise them to test the lung capacity of asthmatic individuals. Although, the homemade spirometer isn’t used within our healthcare systems, individuals can still utilize this equipment as an alternative option as it provides accurate reading for those who don’t have access to the equipment. In this experiment, I measured my lung capacity for a week without breathing techniques; then, after that week, I brought in the breathing techniques, which included the diaphragmatic and pursed-lip breathing techniques. Diaphragmatic breathing involves deep breathing to engage the diaphragm which distinctly improves lung capacity. By reducing the work of breathing by keeping your airways open longer, pursed-lip breathing can slow down the rate of breathing. In doing so, the lungs are more likely to function properly, and the exchange of oxygen and carbon dioxide is improved. These breathing techniques were undertaken three times a day, one session in the morning, afternoon, and night. When measuring lung capacity, it has to be done simultaneously to obtain accurate results.

I found no significant improvement but only a minor difference in the measurements obtained for lung capacity through the time span two weeks. This can be displayed through the attached figures 1, 2, and 3. Figure 1 evidently displays the changes from week one to two. The lower the number is the better the lung capacity gets as you are trying to blow as much water out of the homemade spirometer as you can. It is revealed that later on in the second week you are able to see a minor improvement as the water had gone down 1cm from the first week’s results. Figure 2 highlights that there is continuous minor improvement in the lung capacity. This is presented through the second week as it is aways gaining lung capacity and maintaining its level, whereas week 1 had a lot more ups and downs and couldn’t stay high. Figure 3 displays a scatter of results; this can be indicated through both weeks one and two the measurements vary from 900 ml/sec to 1000 ml/sec. This presents no real evidence as to whether the breathing technique actually works or not. If the experiment was prolonged, I believe that an immense amount may improve an individual's lung capacity; however, from my experience, there are minor changes with lung capacity being improved. From executing the experiments and undertaking research I believe the most reliable way to check your lung capacity is through the peak flow meter.

(Attach graphs of experiments below)

Although these breathing techniques cannot be used to increase lung capacity of asthmatic individual, there is scientific evidence suggesting that you can use breathing techniques for meditation and enhancing concentration of breathing, mental health, and reducing stress. These things impact a person’s asthma so in that regard they may be useful. However, relying on breathing techniques as a viable alternate to medication is not supported by these results and is something you need to discuss with your doctor.

Love to hear if anyone has been recommended breathing techniques by their medical professional and if they were suggested to be used instead of medication (such as a preventer) or as well as medication. Is anyone relying on breathing exercises alone? Love to hear about your experiences with this.

I hope you have found this helpful.

joshuap001
To view profiles and participate in discussions please or .
Read more about...
10 Replies
•

Hi Joshua, you've already posted something very similar recently and had some responses there - not sure why the repost with a different title?

As I and others have said on your other post, breathing exercises can be helpful for people with asthma, but they aren't a replacement for medication, and they should be used alongside medication. No one should be trying to stop their medication by themselves without medical input, even if they think they feel fine.

joshuap001 in reply to Lysistrata4 months ago

Hi lysistrata,Yes I did post one before but the first one way to show what I have learnt and see peoples opinions to it. This post is more about me taking it into my own hands and seeing if breathing exercises actually help increase lung capacity as many articles have diverse opinions. Yes I know breathing exercises shouldn’t be taken over for medication but I do see them as a add on treatment along side the medication.

Well done Joshua. Empiral evidence is the gold standard. Should you pursue a scientific career, you will do well. (Molecular biologist ret.)

Good on you for conducting your research. I’m asthmatic I’ve never been advised to do breathing exercises by a health professional, however, I exercise quite vigorously so I guess that is a similar benefit. Running certainly helps my lungs 🫁! I also use meditation 🧘‍♀️ for stress and breathing patterns in that practice help to calm me and ensure I’m using my full breath. I have NO evidence for this but my peak flow is better after a period of sustained exercise ie. A few weeks.

Good luck with your effort 😊

As a child I regularly attended an asthma clinic where they taught me breathing exercises. At that time there were no inhalers, so self management was important. As well as learning to fill my lungs using my diaphragm, the doctor would squeeze my ribs to encourage me to empty my lungs fully. Many years later, in the midst of a severe attack, I used the same technique to keep myself going while help arrived. In a later career I taught presentation skills and was amazed at how few people knew about breathing from the diaphragm. I don’t know whether those exercises increased my lung capacity but they did give me the tools to cope with my asthma when I needed help. I hope children today have the same training.

I am learning the Buteyko breathing method with a practitioner. I have been learning to breathe into my diaphragm, and have decreased the use of my reliever since starting the technique. I am on week 8 and still have a long way to go, as I still suffer from mucus on my chest everyday. My peak flow has improved since learning the technique as it has become more consistent and controlled. I am convinced by breathing methods and intend to do breathing exercises for the rest of my life. Well done with your findings.

Your experience and experiment is limited to yourself but you haven't even shared with us your asthma phenotype diagnosis, just that you have asthma. Asthma is just an umbrella term for many different types and experiences so, while breathing techniques can be helpful for some types of breathing problems it certainly isn't considered a mainstream treatment otherwise every asthma patient would be referred to a respiratory physiotherapist specialist.

I've tried resistance breathing, Buteyko, as well as diaphragmatic exercises. They help in different ways but I know they're not treatment for my phenotype and AERD.

Dysfunctional breathing can be helped by regular exercises recommended by a respiratory physiotherapist specialist once the dysfunction is diagnosed, otherwise the wrong choice of breathing exercise could make matters worse or have no impact. For instance, over inflation of the lungs can be detrimental or asthmatics with hiatal hernia need to exercise to accommodate that, so learning techniques from a specialist practitioner is definitely recommended. Always talk to your asthma practitioner about a referral or if you are seeing a physiotherapist/breathing specialist independently. Most hospital asthma clinics have a respiratory physiotherapist on the team.

Vayu in reply to Poobah4 months ago

Excellent point. I agree that breathing exercises are not key to every person, however I wonder if we are not missing something in the care path of many persons diagnosed with asthma. Dysfunctional breathing is relatively common among asthmatics, however it is often not assessed until the asthma is consider severe or difficult-to-treat. It is a long journey to get access to a safe option that can be extremely benefical in particular cases. Or worse, the disorder is left unidentified, symptoms remain uncontrolled.

Super interesting, Joshua. I am currently slightly obsessed about breathing exercises myself. They can be beneficial even though an increase in lung capacity is not expected. I wouldn't be surprised if it takes longer to see positive effects (many studies have a follow up period of 3 to 6 months). However, it is super important that the exercises are practiced with the right technique. There is a risk of inhaling too much air when some one is trying to do diaphragmatic breathing and slowing down the breathing rate.

Hi, I used a Powerbreathe device for two years whilst keeping a chart of my peak flow. It increased my flow by between 5 and 10%, which is moderate but I'd say I also felt as if I was breathing better. I got bored of it in the end however.

we (us with asthma) should be using FeNo meters at home the way we use peak flow meters at present....