What is the minimum detection level o... - Advanced Prostate...

I have done plenty of research as well as ask my Dr.’s about the minimum level of detectable PSA for an ultrasensitive PSA test. It seems like there is a lot of contradictory info out there. I just received my latest psa test result of 0.025 - 18 months after my SRT. The PSA seems to hang right around the 0.025 for the last 3 tests (9 mos). I know this is undetectable <0.1 which is good, but what is the minimum detectable psa? Is it 0.001? I have all tests done at LabCorp and can’t seem to get an answer from LabCorp.

What have been some of the lowest PSA values you guys have seen. 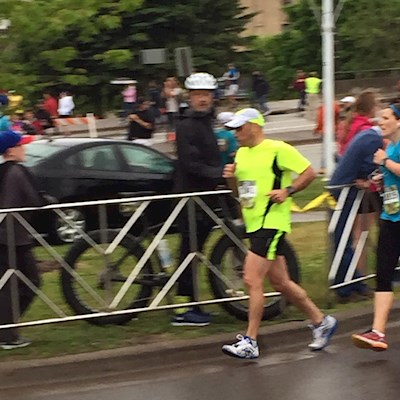 bitittle
To view profiles and participate in discussions please or .
Read more about...
29 Replies
•

I would say that a question like yours is best answered by an artificial intelligence computer programmed to estimate odds beyond human understanding. That's a quantum physics question. I mean no disrespect to your question sir, it's a good one.

I think we've all been frustrated by PSA measurements. I'm on the path to recurrence with an increasing PSA. Like you, I've done plenty of research, and the one thing that I've come across was an paper written in 2007 that looked at 145 papers on the definition of biochemical recurrence, and they came up with 53 different answers. Nuts.

While absolute PSA values are important, equally important, IMHO, is what's your PSA doing over time? Just as important is using the same lab so you're doing an apples-to-apples comparison. I suspect, however, you already know that.

I know that doesn't answer your specific question, but I thought you might find that study interesting.

If you don't mind my asking, do you have any lasting side effects from the SRT 18 months out? If so, what are they and what impact do they have on your daily life?

No lasting side effects. No incontinence or erectile issues.

It depends on which test you use and the lab that runs it. For the ultrasensitive test (uPSA), minimum detectable is 0.01 ng/ml. For one super-ultrasensitive test, it is 0.008 ng/ml. And there are tests that go as low as 0.0001 ng/ml. However, there are no useful applications for anything more sensitive than the uPSA. Everything more sensitive only causes anxiety and should be avoided. the term "detectable" is relative to the test. "Undetectable" on a conventional PSA test is anything <0.1. "Undetectable" on a uPSA is <0.01 (but it may be higher from some labs).

"Biochemical recurrence" after SRT is arbitrarily set as a confirmed reading over 0.2. uPSA no longer has any value for men who have already had SRT.

Hi, I just located and joined this site as I was researching the differences between conventional and ultrasensitive PSA tests. I have had both. I recently completed 39 radiation treatments and I am also living in my second 6 months of Lupron. My first-post- conventional PSA test result following treaments was <0.13. This concerned me greatly. I asked my doctor to do an uPSA test and those results indicate my PSA is <0.014. Your comment above is very interesting and I'm curious where you located your comment that "Undetectable" on a conventional PSA test is anything <0.1. "Undetectable" on a uPSA is <0.01 (but it may be higher from some labs).

I was concerned to receive my <.13 and I'm still concerned about how a conventional test can vary so much from the uPSA. Thanks in advance! g

Thanks, got that. After 5 fun years of dealing with PCa, various invasive treatments, consults, top docs, and more my life depends on decimal points these days. By your original note both of my recent conventional PSA and uPSA test results are slightly above the detectable line following my SRTs. I'm also interested in research that addresses the validity of uPSA tests for men (like me) who've already had SRT. No need to reply. I'm learning from the many other posts here as well as from other sites, support group, and work at the cancer institute. Happy weekend ahead.

I haven't explained clearly. "both of my recent conventional PSA and uPSA test results are slightly above the detectable line following my SRTs" - that is incorrect -- they were BELOW the detectable line. Your results were < 0.13 and <0.014. Both results were "undetectable" - it's as low as you can go. You should understand that as zero.

Ralph1966 in reply to Tall_Allen

Agree with TA. When you see this < sign it means that the PSA is undetectable. My PSA was < 0.008 after surgery for 15 months then = 0.020, then = 0.030 and lastely = 0.050. So the increasing PSA with the sign of = means PSA became detectable. For post radiation PSA levels is defferent, and even 0.1 considered undetectable. If you see the sign < it means undetectable PSA.

i had a good friend who because of his afro-american heritage and a brother already diagnosed with advanced PCa, opted to have his prostate gland removed at the first sign of a detectable rise in PSA. afterward, his PSA never rose above 0.001...his surgery deemed a ''complete cure'' 16 years later, he hoisted a heavy shoulder-held camera and felt a twinge in his neck that continued on to manifest with severe headaches. he died within six months, as no one correlated the tumors in his lungs and brain with his prostate. an autopsy later revealed he died of advanced prostate cancer. so much for ''lowest detectable PSA''.

What a terrible story, I'm sorry for your loss.

I'm more inclined to say "so much for "complete cure." "

Ralph1966 in reply to wifeofvet

That is why MO are asking for Axumin PET scan with PSA BCR following initial surgery/ Radiation. I was angry kind of when my MO sent me for Ax PET scan with BCR of PSA 0.06 ng/ml. Then when it didn't show (clear) metastasis he said I can't start any hormonal treatment as I can't see something to treat. He still recommend visiting RO to be ready for salvage RT + ADT once the PSA reach a higher levels. Ax PET coasts for the insurance was $15,000 and I had to pay $1,200.

My MO also mentioned that I will need to repeat this very expensive Ax PET scan when PSA get higher and before starting salvage radiation.

I read about the hazards of radiation of Axumin injections, and get worried while starting this (known) journey

The point of any medical test is to inform treatment decisions. PSA readings below 0.1 indicate no change in treatment, unless there is other evidence.

In that sense it doesn't matter what the ultimate limit of detection might be. Your readings are stable, near the lower limit of the test's ability to detect, and 1/8 of the 0.2 threshold commonly used for consideration of new treatments.

The threshold of 0.2 is quite conservative, there really isn't any benefit to pursuing lower numbers.

At these less than part-per-billion levels, there is going to be fluctuations and even potential for contamination within the testing lab.

Best not to worry about it; it does no good and stress definitely does harm. I know this is easier to say than to live with. I've struggled with these questions as well. Good luck!

Agreed...it’s the engineer in me that wants to understand the accuracy, variance and limits of the psa testing. Many times too much info adds to anxiety and stress that manifests itself in the illness.

I'm an engineer as well. We should both understand the difference between accuracy and precision, and as engineers understand that excess precision adds no value. Trying to read below 0.1 is excess precision - it doesn't change the decision process or outcome, so it isn't necessary or helpful. It just adds noise.

I’ve never heard of such a low PSA. Why on earth are you concerned! I would celebrate. Get worried when the PSA exceeds 4.O.

bitittle in reply to Stelle

Agreed...not so much concerned but mostly curious about the precision of these tests. I had been in this territory before. Then after my RP my PSA slowly rose for 2 years then quickly shot up from 0.07 to 0.182. I decided on SRT only (no ADT) and now my psa has been in the range of 0.025 for the last 9 mos. I will take it for however long it lasts.

The prostate makes PSA and prostate cancer cells make PSA. Remove the prostate or destroy it with radiation and then the only thing making PSA is Prostate Cancer.

My prostate was removed in Nov 2009 and for 5 years it was 0.01 which was the lowest that the test recorded. Then it started to climb. In Feb 2016 it was 0.24 and Huntsman Cancer hospital gave me 2 to 5 years to live. I did a 40 radiation treatment plus 6 months of Bicalutamide which reduces the production of testosterone starting in with a PET CT SCAN in Nov 2017. Radiation ended Valentines day 2018 Bicalutamide June 1. Aug 7 PSA 0.01 and testosterone 188 ng/dl ( normal 300 to 700 ng/dl ) My Oncology Radiologist has a PHD behind the MD.

Very low PSA results are very important if it is only Prostate Cancer cells making the PSA.

We got zero help at Huntsman. Congrats on your great results!

Can we trust PSA??

My psa had been slightly increasing up to a level of 0.067 as of March. I added Citrus Pectin in April to my typical supplement protocol. My psa on my June test was 0.037. Unbelievable my psa has never decreased without the surgery or radiation. I will see if this trend continues with my September psa test.

did you radiate the pelvic bed or just the in the prostate area.

bitittle in reply to George71

Just the pelvic bed. I had a CT and Bone scan done and they didn’t see any nodes, or metastasis sites light up.

I have to say that I can agree with these comments. I had a RP almost 2 years ago. With a lymph node dissection 12 lymph nodes both sides plus right nerve removed. No positive margins, no seminal invasion, nothing in lymph nodes or outside of prostate. Readings were >0.015, <0.015. 0.009. 0.008 and then last month 0.14. It turns out that LabCorp changed the way they measure things. But.. I have been freaking myself out that it's back, granted my gleason score was 5+4=9 in 3 out of the 12 samples, I am scared. I found one of the top Oncologist at the SCCA, Dr. Evan Yu who I am going to meet. I sent him my pathology report and he replied "pretty decent" and he also said, 0.03 is ONLY when he would begin to look at something further. But my Urologist said (because I was bugging) him about my 0.014, that I could go see the Radiation Oncologist at Swedish if I wanted, but most likely just to have him tell me that 0.014 is too low to do something. Right now, and per Evan Yu he said to quit reading everything on the net as it would drive you crazy or my psych he said. Brian :0

Ultrasensitive PSA tests in US, how low to they go?

possible. To date the most sensitive test I have used is Labcorp test number 140731 which reported...

Hi there, just diagnosed, however PSA testing test did not detect my cancer. Levels were rising...

weeks ago that was a PSA, Ultrasensitive test that came back just under 0.7 - that is what landed...

Is it reasonable to pursue ultrasensitive PSA test that is more precise than undetectable at <0.05?

Why I Choose an Unproven Treatment

After years of doctors, trials, tests, meds etc. it is time...