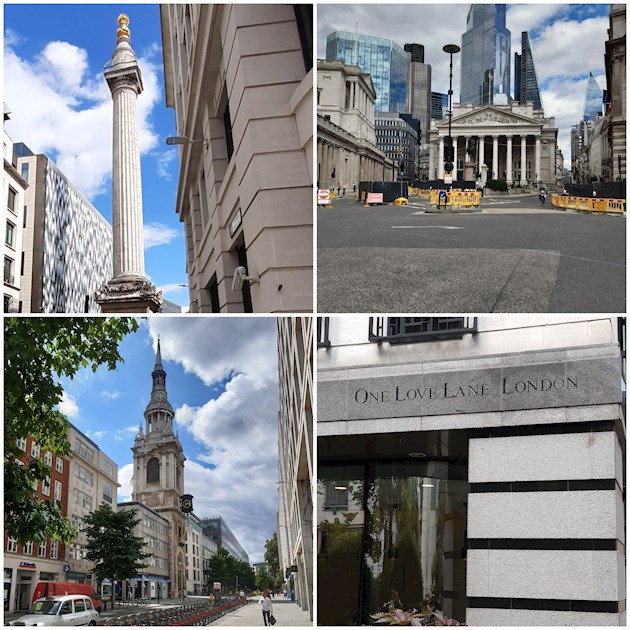 1/ The Monument, built in 1674 by Sir Christopher Wren to commemorate the Great Fire of London in 1666 which started in a bakers house in Pudding lane near this spot.

2/ A bit of modern and old, I prefer the old so will concentrate on the building at the front. The Royal Exchange, originally opened by Queen Elizabeth 1 in 1571 to sell Alcohol and valuable goods ot was destroyed in 1666 by the great fire, rebuilt, then destroyed by fire again in 1838, rebuilt and the one you see was opened by Queen Victoria in 1844

3/ St Mary Le Bow Cheapside, there has been a church on this site since medieval tines, but this one was rebuilt after the great fire again by Sir Christopher Wren. It is said you can only call yourself a cockney if you were born within the sound of St Mary Le Bow bell, If you dont know what a cockney speaks like, it's not how Dick Van Dyke spoke in Mary Poppins!. 🙂

4/ Just a street I walked past, but the name made me smile.

Bazzak
Reading Rabbits
To view profiles and participate in discussions please or .
12 Replies
•

These are very good! Thank you for sharing them with us. 😀👍🌈

In a city near me, there is a little lane that had a bad reputation. It was renamed in the 1800's as it was originally called Groper's Lane. No idea why. 😵🌸

Intrigued to know that Christopher Wren built his own tube station. 😌🌸

There are so many in the City that have had to be changed, but can't mention then on here incase it offends 🙂xx

I agree with you Bazzak about preferring the old to the new. I have a suspicion that in a couple of hundred years, people will still be admiring the architecture of old London but I'm not so sure about The Shard and The Gherkin. (And certainly not the Walkie Talkie). It's a long time since I climbed the Monument, and not so sure I'd want to try now! A great set of information and pics! 🙏👍😊

There are so many of these new towers going up, it's really a shame. The streets today were virtually empty, I do wonder whose going to be occupying these buildings in the future, because it seems a lot of companies have got used to their staff working from home and so can move into much smaller offices. X

Yes, that's a good point Bazzak! The pandemic has proved how many people can comfortably work from home and these massive structures might well be redundant before too long. (I for one would be delighted). I distinctly remember spending time in London some years ago and being suddenly shocked at how all the towering monstrosities had all but swallowed up the London of the past. Well, can't stop progress I suppose but it's a shame! 🙁

MadBunny in reply to 2 years ago

Yes the view from Hungerford Bridge -or whatever its called these days- towards St Paul's ,has changed so much.

MadBunny in reply to 2 years ago

I know I couldnt climb Monument these days😊

It doesn't bare thinking about if any of our historic building ever get forgotten about and swamped by progress. 🤔😊

Thank you. I had a friend who was a true Cockney. She didn't sound anything like Dick Van Dyke. 😂x

I’m loving these posts of yours Bazzak, so interesting. Thank you 🙂

Bunhill Fields is a burial ground opened in 1665 unto 1854 and has many well known peoplelaid to...

Today's trip into the city centre

I think the cream coloured one is a Bull. Hope you like these photos. I enjoyed a cliff-path walk,