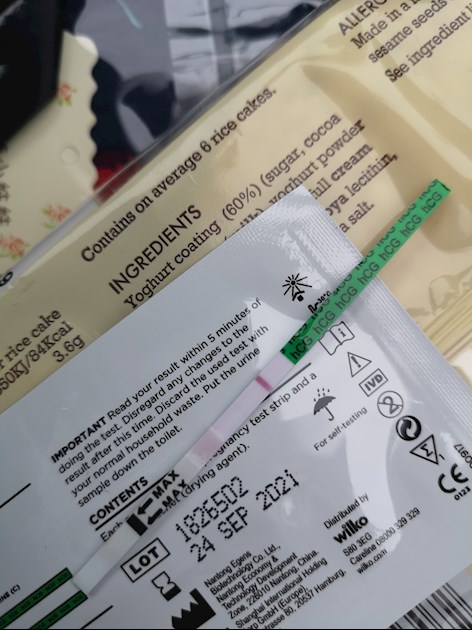 So, I've had the weirdest morning.

My best friend sent me pictures of a very very faint positive line that she did this morning. After telling myself the last couple of days that I also need to buy one, she reminded me to get one myself... This was the result. Its extremely faint, and you can barely see it, but the people I've shown it to have said “there's definitely a line" if I was, I'd be very early on. Ive bought another to test tomorrow morning, so that surely will confirm. Just wanted to know if anyone has also had a line this faint that turned out to be a genuine positive?

I see a faint line! How sensitive is the test meant to be? I know people on the fertility forum swear by either First response early response tests or clear blue....just to be open as I need to be (due to my employee contract) I work for the company that makes Clear blue (although don’t work on that brand). It’s totally up to you which one you use. 🤞🏻 For tomorrow morning for you x

The test says it can be done 4 days before expected period, the problem is... I haven't had a period in months as I'm on the pill but have missed a few this last month! So, not a planned one, but starting to get excited but also trying to not get my hopes up incase, partner is HUGLEY excited, but keep telling him don't get too excited just yet. I got the clear blue "double-check + date" for tomorrow which includes two tests. I'll let you know the result 😊

Oooo exciting! 🤞🏻 😀 Great that although it’s unplanned you are super excited! I just gave away my unused ones, didn’t need them in the end as mine was an IVF blood test on equivalent of due period day, perhaps I should of peed on a stick just for the hell of it 😂 x

I took the same test plus a basic tesco test 3 weeks after conception and got a negative result. Then took one on the first day on my period (which hadn't arrived) and got a similar result to you on this test and the tesco one, both of which said any line, however faint meant a positive result. A week later when I still didn't have my period I took 2 tesco ones again and it couldn't have been more clear. Now 7 weeks pregnant and have my first midwife appointment next week. You dont need to spend a fortune on clearblue, the tesco ones were £3.50 for 2 and is 99% accurate allegedly.

Congratulations! Is it your first? This would be my second. My first was planned and I took first test 3 days after missed period, so there was a solid line. Also, I have no period date to go on, because I've had no period since I've been on the pill, but been a little forgetful with it recently.

Yea, this one is a standard Wilkos one that came in pack of 3. I will try again tomorrow and each morning after that and also got a clear blue. Until I get a solid "girl, there's no mistaking that is a positive" line, then I'm sceptical lol. I'll let you know how it goes! X

Yeah my first. I know what you mean I didn't dare believe it till I saw the solid blue line. Hope it comes soon! I'd only had one period since removing the implant and so I'm shocked we conceived straight away as I wasn't sure my ovulation dates would be accurate, obviously they were!

I took a test this morning maybe even a shade lighter I have dismissed it for now lol will test in a few days if I don’t get a period. I have just mc at the beginning of this month. Re test again in a couple of days x

A positive means positive, no matter how light! I'll just be because there is less hormone in your urine. Definitely test again tomorrow but I'd say congratulations

Once you see that darker line you'll be over the moon.

And how lovely to be expecting at the same time as your friend! Have a happy and healthy pregnancy!

Pink dye tests are my trusty go to but the dip sticks for me have produced lines such as this. Not quite pink enough for positive and not quite see through enough to rule it out! I totally feel where your coming from, my advice is to get a first response early or a digital. Good luck! Xx

The hormone levels have to start from somewhere but red colour strips don’t have the same problem as blue ones where you can get evap lines, so I’d take this as a positive.

Bear in mind you’ve tested very early on and lots can still happen but for now this is a positive!

Yeah that looks like how mine first were, was only just pregnant them but now have an 8 mo son lol. GL x

How did you get on Hun? X

Hi did you get a positive? mine was an evap line got af but thats good for me cycles back after mc.

the result! IHowever I have noticed a very faint positive line, could this mean I am pregnant but...

period which is very unusual! I took 2 tests this morning which showed positive faint lines. Around...

on those but will definitely be getting a red dye one . Just a little update. Also I know you all...

looking very silly... can anyone else see a faint line, I did the test this morning, it had a very...

Anyone conceive after getting Covid'19 vaccination? Help!