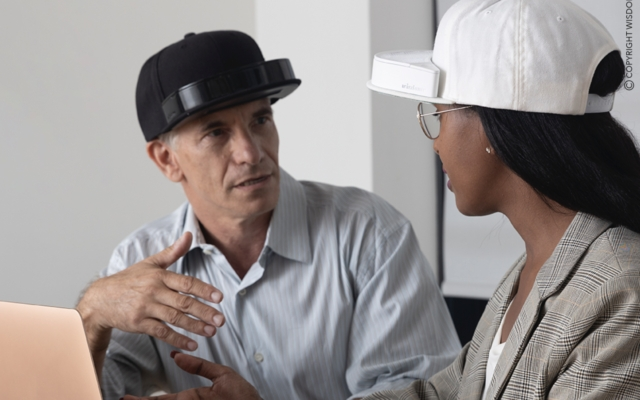 A new device, invented by scientists at the Technion-Israel Institute of Technology, which mounts on a hat and provides an "air screen" to protect from viruses. (courtesy of Wisdom Wearables)

Instead of fabric on face, small air-pressure device is worn on baseball cap, creating a ‘shield’ blocking 62% of incoming, 99% of outgoing virus droplets, says peer-reviewed study

Israeli scientists have invented a way to deliver the virus protection gained from face masks without needing to actually cover the face — using an “air screen” instead.

They produced prototypes of a small battery-powered device that fits onto a baseball cap and emits air that blows downwards in front of the face at 30 kilometers per hour (19 mph).

The prototypes worked well, indicating they could protect the wearer from viruses emitted by those around them, and — if the wearer is infected — protect others.

The testing took place using particles of different sizes that mimic the movement of virus droplets and aerosols — minuscule pieces of bodily fluid that can carry the coronavirus or other viruses. The findings are now online in a peer-reviewed study published in the journal Experimental Thermal and Fluid Science.

“We tried to quantify how many droplets still reached the face, and found that the ‘air screen’ gives high protection which is comparable to that of masks,” Moshe Shoham, professor at the Technion-Israel Institute of Technology and co-lead of the study, told The Times of Israel.

A company he established, Wisdome Wearables, will soon start producing the devices and they are expected to reach stores within a few months.

“It actually performs two functions, firstly filtering the air, which increases hygiene for the person wearing the ‘mask,’ and secondly, the screen of air blocks droplets and aerosols that carry the virus,” said Shoham.

“This is a good solution given that regular masks are very uncomfortable for many, especially the elderly, and very inconvenient for people in professions such as teaching and therapy who want their faces seen.”

Several research teams have experimented with air-based alternatives to masks but none have yet been turned into popular devices. Dyson, the company known for its vacuum cleaners, is poised to release headphones with an air-filtering device. Unlike Shoham’s solution, it sits on the face and is expected to cost hundreds of dollars, while Shoham is aiming at a low price point.

Shoham developed the mask with Prof. David Greenblatt, David Keisar and Anan Garzozi. Greenblatt said that the technology has long-lasting relevance since masks will be in demand beyond the COVID-19 pandemic.

“What we’ve developed will stop SARS‑CoV‑2 droplets, and also help against MERS, influenza and various other viruses,” he told The Times of Israel. “We expect our device to be affordable and effective. We think the pandemic has shown the usefulness of face masks far beyond COVID, and we expect this to have relevance after the pandemic.”

Why Reading Your Doctor’s Notes Can Be Painful