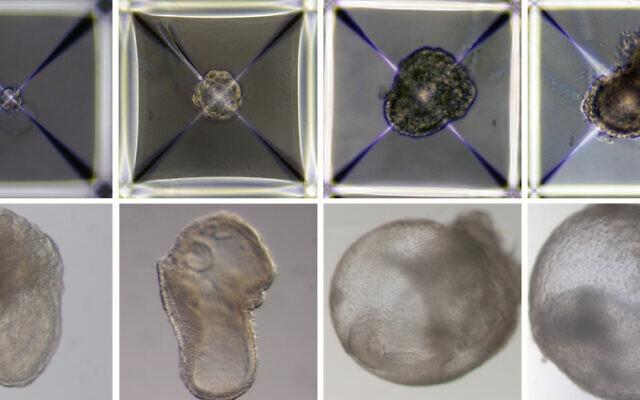 In peer-reviewed breakthrough, embryos are grown from stem cells; scientists say method may one day be used to ethically grow cells for replacement human organs

An Israeli lab has grown synthetic mouse embryos with brains and beating hearts — in an egg-free sperm-free procedure that used stem cells taken from skin.

The breakthrough, published on Monday in the peer-reviewed journal Cell, represents the first time that an advanced embryo of any species has been created from stem cells alone, cell biologist Prof. Jacob Hanna of the Weizmann Institute of Science told The Times of Israel.

Hanna, who led the research, said that previous attempts had led only to blastocysts, meaning the structures formed in the early development of mammals. Blastocysts have a tiny fraction of the million-plus cells that are in his embryos.

“It’s remarkable,” he commented. “There was no sperm, no egg and no uterus, but we managed to get embryos formed from stem cells alone to eight days — a third of the gestation period of a mouse — with a beating heart.”

He said that the research could one day be used to grow artificial human embryo-like structures to generate cells for futuristic medical solutions.

Scientists are constantly working on ways to use cells to grow organs for transplant. The obvious source for such cells — regular embryos — is seen as rife with ethical problems.

Hanna said synthetic embryo-like structures could be viewed very differently. They are similar to regular embryos, but are not viable for implantation.

He foresees a day when sick patients may give skin or blood cells for the growth of artificial embryo-like structures, which could in turn yield the cells needed to grow organs.