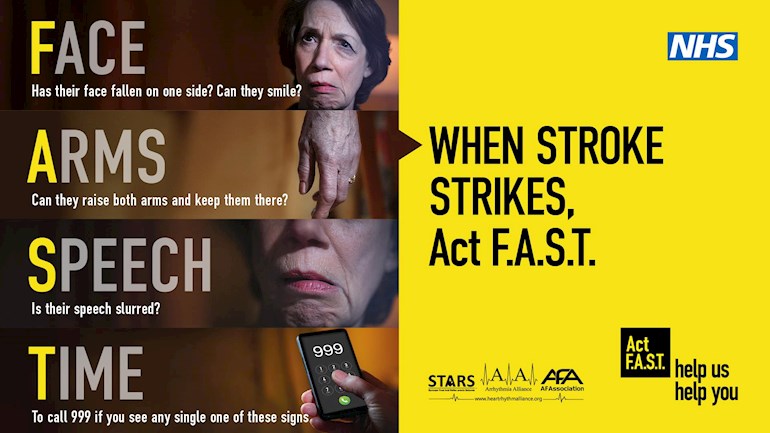 We are supporting the relaunch of Public Health England’s Act F.A.S.T stroke campaign.

For some people, living with an arrhythmia, such as atrial fibrillation, means they are at a higher risk of having a stroke. This is why it is so important for people to know their pulse. Visit knowyourpulse.org for more information.

It is important for everyone to know the signs of a stroke and act F.A.S.T.

When I had a stroke, the ambulance crew (999 response) didn't realise that I had a stroke as I didn't have FAST indicators. Consequently, they talked to me for an hour before my slowing verbal responses made them realise that I had suffered a full stroke. Once that had dawned on them, it was a blue light run to hospital. That was an hour lost when I could have been thrombalised and, that hour may have helped to retain my full eyesight.

In non-COVID times, I am a mystery patient for medical students. A group of third years who were examining me had never heard of FAST. The GP who was moderating had to explain in detail.

Both of those experiences are concerning. Perhaps the awareness of FAST is needed in the medical community as well as the public.

I was finally diagnosed with Paroxysmal Atrial Fibrillation about 3 weeks ago. My symptoms weren't...

ablation to do. I am so worried about having a stroke. Will this cure me, will I be able to come...

Ectopic like feeling that lasts 2-3 seconds. What is it?

Hello everyone. I know this topic is discussed frequently but I really need help with this weird...

someone has symptoms similar to mine or if someone knows what could be causing them. Since a couple...

wondered if anyone knows much about blood pressure readings and what could be a warning sign of...

Possible Side Effects of the COVID 19 Vaccine?

Sinus arrhythmia found but is this really what I am feeling?

Are you heart palpitations this severe?