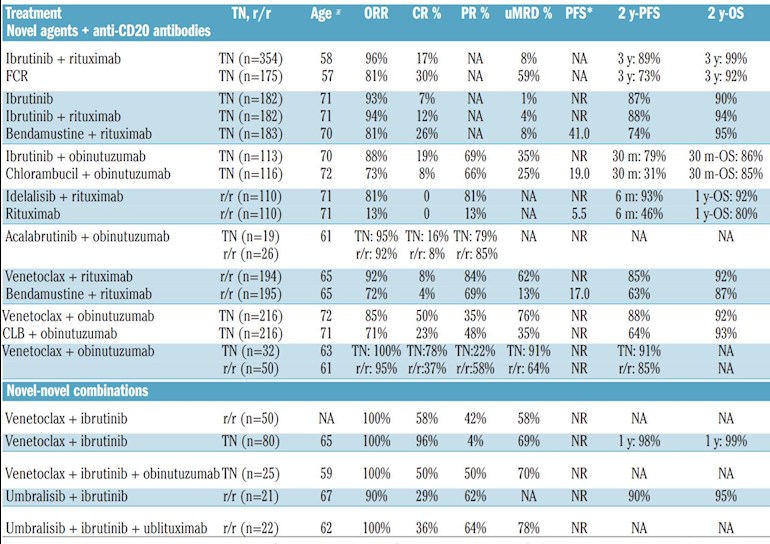 "Chemoimmunotherapy has been standard of care in patients with chronic lymphocytic leukemia for a long time. Over the last years, novel agents have produced unprecedented outcomes in treatment-naive and relapsed/refractory chronic lymphocytic leukemia. With the advent of these targeted agents, treatment options have extensively diversified and new questions emerge. It is still unclear whether these novel agents should be used as sequential monotherapies until disease progression or if they should preferably be combined in time-limited treatment regimens aiming at deep and durable remissions. While both approaches yield high response rates and long progression-free and overall survival, it remains challenging to identify patients individually for the optimal concept. This review provides guidance in this decision process by presenting evidence on sequencing and combining novel agents and further elaborating on the advantages and drawbacks of these two concepts."

avzuclav
To view profiles and participate in discussions please or .
13 Replies
•

Great resource which has now been pinned for ease of access. It's so important, I've separately posted about it here, with the accompanying image showing where the novel treatments target CLL cells.

This is fantastic data and just shows how important trials are to move treatment options forward. What an awesome grouping of information and further proof that these novel agents are extremely effective both alone and in combination. - Mindy

Not accessible to all?

From the link you should be able click on PDF to get the PDF. Perhaps this link to the PDF might work:

Not without joining the site. But, will be helpful to those who do

Try this link. It doesn't ask me to join anything to view it.

Thank you! That one works

Thank you very much for sharing.

Excellent article, thank you avzuclav. I liked the 'go go' and 'slow go' treatment options - haven't seen that terminology before ;-).

Somehow I missed this when it was first posted. So I thought I would comment partly to expose it to some other sets of eyes and partly thought it might be worth a couple of explanatory comments from me about what I think is most important from the table. Personally I would look mainly at only one of the columns in here but before I get to that let me talk about a couple of others.

The last column 2 year overall survival might well of course the one we are most interested in. Most of us want to live. And the great news is that for ALL of the treatment combinations between 80 and 99% of people lived for two years. Considering much of this is relapsed/refractory CLL this is surely very encouraging.

Although of course if you are like me a 1% chance of dying in the next couple of years seems really low until it is YOU that is facing it. As I’ve sometimes said to doctors to help get this point accross if you were on holiday and someone was trying to get you to go on a bungee jump would you go on it if for one out of every hundred customers the cord broke and they smashed to their death? Suddenly if it’s you looking that square in the face it seems real huh? But isn’t that the gift CLL has given all of us. Because of course the rate of survival on drugs will be much higher than it would have been off drugs (provided treatment is reserved for when it is really needed ie the disease is active. ). So we are among the enlightened ones who’s eyes have been opened to our own mortality.

However, this final column doesn’t tell us very much at all. Given the size of the studies and the different populations (the average ages is just one clue that we are comparing apples with organges) I don’t think we can say much at all about overall survival (or indeed progression free survival which means staying alive and also not needing another treatment) except that they are all looking pretty good with the exception of chlorambucil combined with obinituzimab (but even there that may partly reflect a sick population for that study). The studies are still small enough that chance could account for most of the differences seen in survival statistics here.

Actually what I find most interesting here is the UMRD column. We do have to caveat it by saying this Is not a systematic review and we don’t know from this table how the study populations may have influenced the differences seen. But since the differences are so large it does seem to me that we can read something into it.

My CLL specialist consultants believe that especially in the early disseae getting to the point that it’s not possible to detect The disease is really important because this means you are much more likely to remain well for years (maybe even decades!) and that there is no need to keep taking medicines whilst in that situation.

So we can believe the hierarchy and it makes sense.

To me the real stand out is that if you are a treatment naive patient you want to at least consider taking venetoclax plus obinituzimab! If 91% of people get to uMRD you have to assume that a very significant proportion of them are highly likely to get really long remissions. Of course the combinations of multiple drugs may still turn out to be even better but the numbers are just too small to be that confident yet.

Honestly given the financial implications of taking ibrutinib for multiple years as well as the side effects burden over time I’m a little surprised that treatment naive patients are not all being strongly advised to consider that combination as an option. And yes maybe v might be as good on its own but we don’t know that so it does to me look like the combo would definitely be worth at least considering for a treatment naive person and of course the FDA agrees since it gave that combo a first line indication recently.

The other conclusion you can come to is that any combination which includes venetoclax gives you a good chance to get uMRD and ONLY combos with venetoclax give you any chance of getting as good a chance of uMRD as you’d get with FCR (let alone better!). Any newer drugs apart from Venetoclax are far inferior to FCR in gettting to uMRD. Now this of course doesn’t mean that there is no place for Ibrutinib monotherapy just that it’s not the first choice if your goal of treatment is to see if you can get close to erradicating the cancer and even potentially a cure for at least some people.

Anyway I hope that helps and remember that there are other reasons for choosing ibrutinib, uMRD is not the be all and end all. And we may even find out that ibrutinib prolongs life better than some other treatments even tho it doesn’t often give you the MRD status. But we simply won’t know that for at least another ten years or more. Why? Because in the studies long term post follow up periods people just are not dying at a fast enough rate! That of course is great need for us. But I do remember getting a bit alarmed at the hint that FCR may be associated with more deaths in follow up then Ibrutinib (since I found that out in the middle of my FCR treatment...) but again the numbers were so low even in that study it really is hard to conclude for sure that they are real.

So for now we either roll a dice by joining some trial or other (and perhaps trying to ensure we enter a study where Venetoclax is an option) or we make a decision about whether or not we believe the idea that getting to undetectable status is important. If we do Believe there then this data underlines that to achieve that goal at the moment there is really are only two realistic options FCR or a venetoclax containing combination. Over time we will become clearer about these issues as a community.

...in the phase II CAPTIVATE trial, which was presented at the 2019 ASH Annual Meeting, investigators confirmed the potential for fixed-duration therapy with the combination of venetoclax (Venclexta) and the BTK inhibitor ibrutinib (Imbruvica) in patients with newly diagnosed CLL who are less than 70 years of age.

Similar results have been seen with the combination of venetoclax and ibrutinib plus obinutuzumab (Gazyva) in an institutional study conducted at The Ohio State University. With long-term follow-up, it appears that few patients who discontinue treatment are relapsing, says Woyach."

This post provides a timeline from the 1950s to how we arrived here:

acquired resistance mechanisms to novel agents. In 80% of patients with ibrutinib failure, acquired...

Revisiting Richter transformation in the era of novel CLL agents

review of where we are with the understanding and treatment of Richter's. Sadly, still not looking...

FDA Frontline Approval of Venetoclax and Obinituzumab in the USA

Has anyone been able to go down to 140mg ibrutinib due to si...

Scientists finally know why people get more colds and flu in...