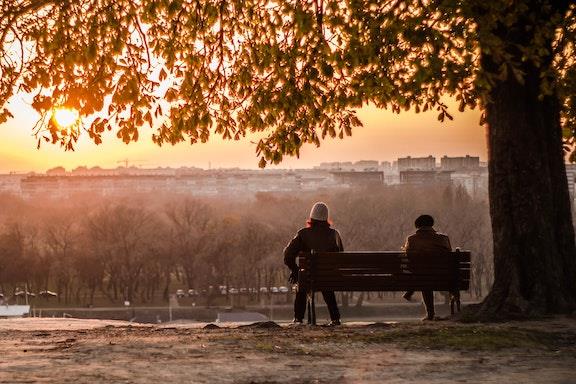 Ricky Gervais has always championed kindness (even though it has to be said that some of his comments when he hosted the Oscars didn’t quite fall into that category!)

And earlier this week, while being interviewed on TV about series 3 of his hit Netflix series, ‘After Life’, he said something which particularly struck home and touched me.

“Always be kind," he said, "just in case, because you just never know what someone is going through.” And how true that is. As we go about our daily lives there are a myriad of people we interact with, who are putting on brave faces, even though they are going through tragedy and/or unimaginable personal suffering. One harsh or unkind word can tip someone over the edge in those circumstances. So I’ve vowed to be extra careful to be kind, not only to those people it’s easy to be kind to, but to those who cross our paths who seem impatient or bad tempered. Because we just don’t know….

I’ve loved After Life, which for those of you who haven’t been able to see it, is a very true to life, often funny, often sad look at someone who is grieving the loss of a loved one. And done in that comedic/tragic way that Ricky Gervais excels at.

As a result of all of the interest in After Life, and to mark its final series, in which the protagonist Tony (Ricky Gervais), often chats with someone in a similar position to his own on a bench in a cemetery, Netflix, together with CALM (Campaign Against Living Miserably) has installed 25 benches in UK locations, inscribed with ‘Hope is Everything’, and its hoped that these will be used by people to sit, reflect and interact with other people.

But even if we never come across one, we can always make sure we try to be kind!

Definitely food for thought Callendersgal. Many seem to rush through life with barely a thought for others. Social media has thrown up a myriad of folk who think it’s ok to say what they like online and this can spill over into everyday life. Kindness is something everyone should practice especially during these uncertain times. I’ve not watched After Life but our daughter likes it. CALM are great and encourage people to talk and catch up with friends. I’ve heard of the benches although there are none in this area.

Do you know where in Bristol I can find it?

Hi Bifield34, apparently the Bristol one hasn't been placed yet (and I'm not sure how many, if any, are in situ as yet). I gleaned the info. about the Bristol bench from a local online news source B24/7, at bristol247.com/news-and-fea...

and that was dated yesterday. The article goes on to say that the bench has arrived at Ashton Court and that the likeliest location for it will be on one side of the mansion. I hope that helps!

That's it isn't it it doesn't cost anything to be kind does it?

Another skill I have learned during the pandemic is to look at infuriating situations from different perspectives and one of these was yesterday when the 9am bus didn't turn up to go to Newport as I had an interview up there and had planned to have gone to the park beforehand but due to the late bus that hadnt been possible!

Initially I was miffed over that but had a think of reasons why the running of the 9am bus hadnt been possible say a passenger taken ill no there, staff off sick rather than thinking it was done maliciously to wind people up to spoil their plans!

Thinking like that helped to change my reaction from being miffed to concerned.

Sadly my father never learned this skill when he was alive.

I did have my interview yesterday and the interviewers seemed nice and I'm just waiting to hear back from them but if I don't get the job it's not the end of the world!

What I decided to do was rearrange the park visit for Saturday 5 February and have lunch at a French bistro afterwards.

That’s a great way to look at things Catgirl! I’m glad your interview seemed to go well and wishing you the best of luck for a happy outcome!

I don't say that Sara_2611, but I do understand why some people feel they want to. Not retaliating is the more difficult choice when we are under attack. (On occasions it will have been the more sensible one, as aggression tends to escalate aggression). Of course if we all practised kindness, there would be no further need for aggression, but that's a utopia which mankind will doubtless never achieve. it's unrealistic!

i know i was speaking generally & hypothetically

Yes Callendersgal, it makes me feel happy to be kind even during sad occasions as sometimes we need people to be kind to us.

I’ve not had a good week but my husband has been very kind supporting me even though he is in a lot of pain with his arthritis. I’ve had a really bad back all week but not sure if it was because I had to keep rigidly still for 45 minutes having an MRI scan. I had to pay for an upright one as I am claustrophobic in the tunnel one and panic. I have had the TENS machine on most of the week.

Our close friend is dying with terminal lung cancer and was only diagnosed on 31 December as couldn’t get to see doctor for an X-ray. Too late now! We are all devastated, particularly his wife of fifty four years.🥺🥺

I’m not sleeping and have a lot on my mind. Our lovely grandson Jacob will be one year old in February and had to have a PCR test due to a fever but it was negative and he is still really unwell so my daughter is contacting doctor today which is another performance as the receptionists are like a security team which isn’t helpful.

When one of my daughters asked to see the doctor face to face a few weeks ago the receptionist said “He is only seeing patients with lumps!” She was so upset but the receptionist denied she’d said it when my other daughter rang up to complain. I was furious as she had a swollen face and blistered head due to her hair dye being incompatible with the COVID vaccines. No patch test was done as she has used the same dye for 9 years but apparently it is one of the side effects 😩😩 she eventually got a phone consultation so the doctor could not see her symptoms and she told her just to let it heal naturally. It took two weeks to clear up and she had COVID too even though she had the booster 🤷‍♀️🤷‍♀️The two red lines were there for 15 days and she was really ill. She couldn’t return to work as she works at the local hospital and when she did she had to work 50 hours a week as so many staff off ill.

Yesterday, I received a Christmas card posted on 16th December 🤷‍♀️🤷‍♀️ Royal Mail here up the wall! Well I have finished my rant for today so just off to chemist to get some meds for our lovely Jacob and then I’m going to the local swimming pool to help my back.

Don’t forget to be kind as we don’t know what is going on in the daily lives of others. 💕💕keep safe everyone 💕💕

So sorry to hear of all your current troubles Goldenanny. Sometimes it's really hard to be cheerful with such a lot of negative things going on at once. I think we are all struggling with the aftermath of the pandemic and in a way, apart from the tragic loss of life and lingering medical problem after effects, the worst long term effect is going to be a severe lack of services in many sectors for a long, long time to come. And it's going to take us ages to adapt to what feels like a huge hole in essential services. There are after-effects we haven't even thought about yet, sad to say. In situations like this, I find I fall back on that old remedy 'this too will pass'. I guess we are sometimes forced to go through the eye of a storm and hope that when it passes we'll have survived and go on to fight another day. I hope things get better for you soon! It's so sweet to hear of your grandson's upcoming birthday though. I remember how excited you were at news of his impending birth and he at least has been a huge addition to your life!

ignored. To the people who think this is all a hoax they should meet my two friends who were...

Free for All on Friday

accomplished Chinese violinist who was busking, and whom we often come across on our travels. It's...
•
28 Replies

are a special group of people in that we have a big need for social interaction too, as caring can...
•
16 Replies

Caring for husband with dementia

loses train of thought. So its kind of a lonely situation for me...his not remembering past times...

A true story of devotion and love.

coma in the hospital. His dog was allowed to stay with him, and he did not leave his side day and...

Full time carer to my partner! Need advice and maybe a rant!...