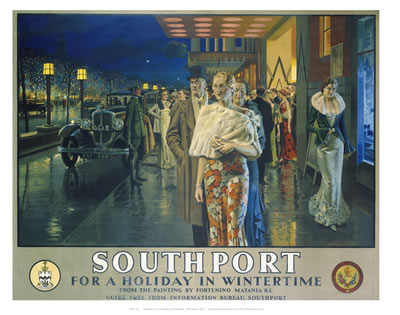 In case anyone is thinking that I spent my childhood fantasising about fur coats and knickers. Or that my mother and her friends indulged in inappropriate language in front of their children. I thought I'd better give a bit of background information about how my poem 'Fur coat and no knickers' came to be written.

I have a bit of a thing about old railway posters and the above one is hanging directly over my computer monitor. My mother and her friends were laughing about the fact that those days were long gone and that's when I overheard one say "Ah! Yes, the days of fur coat and no knickers". I would have been 6 or 7 at the time, but I was reminded of that wonderful phrase whilst sitting trying to think of a new poem. It has to do with people putting on airs and graces when they can't really afford it, nothing else!

Or as my mother would say 'Mutton dressed as Lamb'

I believe you Don and it's something my mum would say too along with red hat, no knickers.

Love that poster and it's some years since we visited Southport. Take care xxxx

I knew exactly what you meant. In my area they were known as 'ten-bob millionaires', meaning all for show but no real substance.

I was born in Southport

Don't worry Don, we all knew what you meant - 'folk who have ideas above their station'! I haven't been to Southport for about thirty years but the very first time I went there I was just sixteen. I went with some friends from our local roller skating club to the outdoor roller rink that used to be on the seafront. A very, very long time ago! Happy days!

It's a Midlands phrase too Don, along with ' two mercs on the drive baked beans on the stove'

my nan and grandad where posh and lived in Birkdale just up the road.however their son my dad had moved down south and every year he would visit with me and my brother on an old BSA motorbike and side car,Taking us via the A57 snake pass over the tops and through the moorland clouds and 3 punctures later on we would descend and travel to Birkdale.We would sit at the level crossing and watch the trains and occassionally would venture into Southport,i particularly remember Lord st in Southport which was quite posh and even had a Lyons tea house/cafe i think where we would embarras dad by nicking the finger biscuits.We would wander around on our own without fear of anything and us cockney kids would get penny buns from the bakers and sometimes free cakes as they could see we were poor.Oh happy days. how the innocent the world appeared to be then,What the hell happened and what the hell has this ramble got to do with COPD.just fancied a babble.for a change instead of a rant.love to all.you are a clever bugger Don with your poetic gift.

Have an impressive or sophisticated appearance which belies the fact that there is nothing to substantiate it.

‘the government's policies are all fur coat and no knickers’

I heard my mum say it a few times too, also for the same reasons, and another saying "Mutton dressed as lamb"

My mam used this saying fur coat no nickers about her neighbour years ago when we lived in Liverpool !!

Hi Hidden my mother used to say that about ladies who were uppity. My late husband`s mother , over hearing someone putting on airs would say they were "talking lace hankie ". And isn`t it odd how we stick with the superstitions our mothers had. Never put new shoes on the table, crossed knives cause a row,spill salt throw some over your left shoulder, never bring a stone into the house (why ?). and something about holly after Xmas - can`t remember whether you were supposed to burn it rather than throw it out. Sheila xx

This epithet was used in conjunction with 'Bread and Lard Island' for areas where the facade was a bit thin. The implication of the earning of the Fur coat was derogatory, not to be understood by 'Little pigs with big ears'.

Ye Don. Heard that quite a few times. I was born in 41 Birkenhead the back streets.

"Red hat and no drawers" was a saying in my husband's family!

Wonderful memories of sayings we heard as children, Don. If a girl walked past and she had developed early, Mother would say, disapprovingly, "She's a big girl for her age", meaning she must be promiscuous !! Today is a good day for me; the cool, damp, air (UK) helps me to breathe more easily. Best wishes, Albert.

Still a bit too hot for me around here, Albert. Always looking for shady spots. 😎

My mum used to say fur coat and no knickers about a woman who lived down our road. Mum was from Liverpool. Is it a Liverpool saying?

haha, i love saying like this, it reminded me of:

well....the temp filling is doing really well haha , i am going to go back though, now you've reminded me

My mates and I looked out for...

Those Men In White Coats and Little White Mice...

Men in white coats have come to the conclusion that memory can be inherited...in mouses. They think...

However ... 6 days later we were back in critical care with my mother intubated. Multiple...

hundreds of replies contributed by her, and the replies in turn to her written by so many...