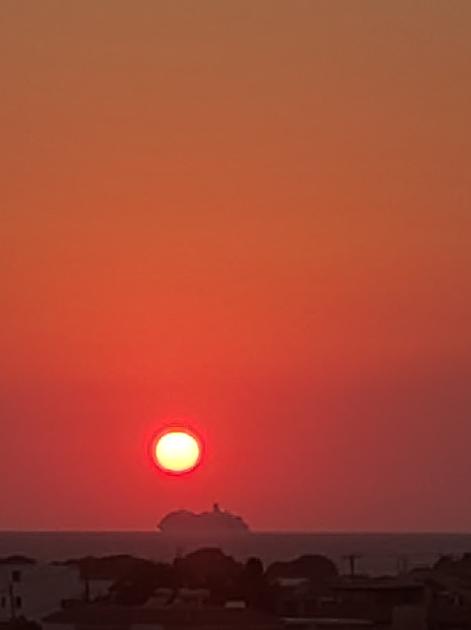 It's stunning, have a good night and take care 😊 Bernadette and Jack 🐕 xxxxxx 🌻🌻

I guess those on board ship got one hell of a view . You have a good night take care and keep safe xxxx

No my birthday is in a couple of weeks. But won't be celebrating it 👍🏼 xxxx

sassy59 in reply to 2 months ago

Oh ok but I hope you have a good day anyway. It’s just on your profile you’ve been 58 for ages yet now you’re 59. Hope I haven’t caused offence but I just noticed it. Xx💕🤗

madonbrew in reply to sassy592 months ago

That was a good observation Carole 💖

sassy59 in reply to madonbrew2 months ago

I do hope they were looking at the lovely view, rather than sitting round the Captains Table, holding "important" conversations.

Well the ship could be named titanic 😂😂😂

I wonder if any ship or any other form of transport, like a plane or special racing car was ever called Titanic after this. There was a story about (I think a football club,) who named a stand Rosemary West, it was to honour somebody called West, no one around old enough to understand a lot of peoples horrified reaction to the name.

No nothing named titanic after the disaster it was deemed bad luck .

I should hope it was. I wonder how long before people no longer know why it is bad luck, although with the film may a fair bit of time.

Not really because the press ran the story for quite some time .

Wow, that is quite some picturesque sky isn’t it! I didn’t see any that colour from Lesvos!

in reply to madonbrew2 months ago

So beautiful!!! Sunsets are so serene !!

in reply to Solily2 months ago

That's how I see nature . People forget the beauty around them half the time

What a sunset. I don't fancy cruise ships; something smaller would suit me, eg. a Thames barge, the Waveney, or even a MacBrayne ferry. Waveney is a historic steam ship. Daughter loved her huge engines, which was just as well, because the engines were indoors and most of the time we were on her the rain fell down in buckets.

Piperava in reply to Alberta562 months ago

Do you mean The Waverly?

Alberta56 in reply to Piperava2 months ago

Yes, I do mean the Waverley, or Waverly. My typing is on the blink today and my spelling has never been brilliant. I used to teach English, so you can imagine the interesting situations this sometimes led to.

Blackcat99 in reply to Alberta562 months ago

Or even the Waverley? 😉 The last time I was on a CalMac ferry was just pre-Covid, Kennacraig to Islay, and I was astounded at the updated version of the traditional MacBrayne's. Big, sweeping stairway in the central area, gold paint everywhere, very posh - thought I'd landed up in a Jane McDonald documentary! 😎

Maggie_Mae in reply to Blackcat992 months ago

Quote: thought I'd landed up in a Jane McDonald documentary! 😂😂😂😂😂

I had to reread thought at first you meant The Waverley going doin the water !

Blackcat99 in reply to Maggie_Mae2 months ago

Well, The Waverley did get a refurb in 2019 or thereabouts, but I doubt if it went quite that far!! That'd be a sight to behold 🤣 A bit late to be goin' doon the watter for the Fair, but we could maybe organise a Forum Day Out to check her out? (waverleyexcursions.co.uk/)

Maggie_Mae in reply to Blackcat992 months ago

Yeahhhh!!! Wouldn’t that be brill .. with a fish supper in one hand and other hand fighting off a seagull😂But seriously that would be a great day out!!… bring back memories for many! 😀

Alberta56 in reply to Blackcat992 months ago

Alberta56 in reply to Blackcat992 months ago

The ferry we caught from Ullapool to Stornoway last year was strictly traditional, thank goodness, as were all the other ferries we came across on out travels.

in reply to Cloudancer2 months ago

Good morning yes what a nice pic that is well looks like weather hotting up here we are having weather like you have , this week from what weather mans saying , les are wobbly past coup,e of morning now going to have pub lunch tomorw booked it last night looking forward to that now , of for shower then chillin all the best 👍 G R

in reply to ghousrider2 months ago

in reply to Bingo882 months ago

I'm trying to, but got lots of stuff to sort out over the weekend ,👍🏼😂

Bingo88 in reply to 2 months ago

Just space it out pal if something can wait till Monday do it then. Take care

in reply to Bingo882 months ago

Looks like a fantastic view from your place too 😀

A beautiful service for Barbs 47

went to Barbs 47 funeral yesterday, her children had a beautiful service for her & it represented...

A picture of really beautiful water

the new picture. I was going past the beach and had to stop just to capture the moment
•3 months ago
32 Replies

Hardy fuchsias viewed from my chair

these lovely fuchsias, enjoying them now. Think will have to prune them more early next spring,...

long been busy had foubd job again and been ill too. So hopefully everyone is well and have some...

Morning mist in the forest