A beautiful walk with hubby today and... - Positive Wellbein... 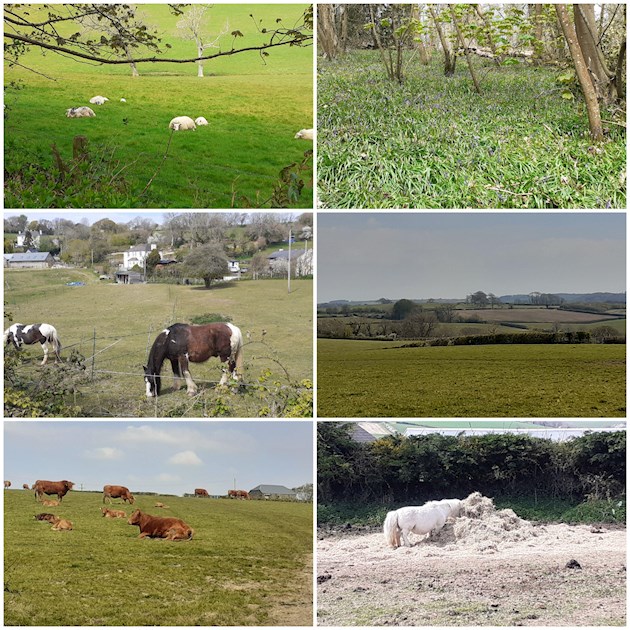 Here's some photos from today's walk and picnic.

The top right photo shows the Bluebells now coming out in bloom. I've added another photo in a reply showing Wild Strawberries in flower.

Have a good evening/rest of the day.

Here's the photo of the Wild Strawberries.

Lovely photographs Alicia. The bluebells are just emerging and in a week or so will be a carpet of blue. My favourite time of year! Thank you for sharing and have a lovely evening 😊🌸

in reply to Dovedale42 years ago

Thank you. Yes the Bluebells will soon be in full bloom, just need the cold nights to disappear and then they'll be everywhere. It's definitely my favourite time of year.

Hope your evening is going well.

Dovedale4 in reply to 2 years ago

Luvin the photos as per usual. Wonder if the horse on the last photo was miniature ????

in reply to Imaaan2 years ago

Imaaan in reply to 2 years ago

It sure is adorable.

in reply to Imaaan2 years ago

Fabulous! No sigb of bluebells here yet. You are warmer than us. We have heavy frosts, then beautiful sunshine. Potatoes are just poking through. We are desperate for rain though in the south east.

Thank you. We've got a fair few coming out now. We've been having frosts but fortunately none this morning. The wind has felt warmer today as well.

I don't like to say it but we are also desperate for rain, it's very dry and dusty here in the South West.

We are having to water the garden. Dry April is very bad for conifers 🤔

Yes we've been watering as well. I didn't realise a dry April is bad for conifers.

Do you remember a few years back when lots of conifer hedges started to turn brown? Don't know if that was in Devon though as you are wetter than us. We have a 15ft high hedge. It's clipped every year and looks beautiful but that year after a very dry April, it developed these brown patches. Has only just recovered. Some people lost theirs completely. The water from the septic tank waters ours now using a pump. Very rich in nutrients!! 🤣

No I don't really remember that Diana. I'm really pleased your's recovered as the do take a while to grow. Now I would never have thought of that as a way to water, recycling at it's best.🤣🤣

Hedge is 45 years old. If we had lost it due to drought it would have exposed us to the neighbours and their windows 🙄 and we'd have to have started again!!

That's a very old hedge but it's now in excellent condition and a very good screen.👍🌈😊

in reply to 2 years ago

Thank you Sue, it really was lovely.🙏😊🌺

Thank you Jerry. I'm so looking forward to your forest photos with the lovely green trees and the Bluebells.👍🙏🌈😊🌺

A walk with my hubby today - first set of photos

enjoy the photos - the dragon fly was one that my hubby spotted. Hope you've all had a good day so...
•2 years ago
26 Replies

Hi all Here are the other photos from today, you will see I saw some early lambs, a sign of......
•2 years ago
44 Replies

had a good day. I enjoyed a powerwalk today, it was lovely and frosty in places and ice on top of...
•2 years ago
29 Replies

Hi all Here are the photos from this afternoon's powerwalk, the weather brightened up very well....
•2 years ago
10 Replies

Hi all Here at the 2nd set of photos from my walk today. The horses live in stables which are just 5
•2 years ago
32 Replies