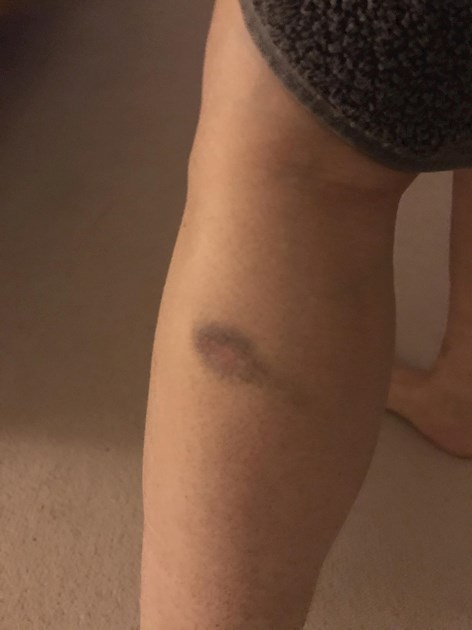 I have found 3 bruises ( 2 large) have appeared in the last 3 days without any recollection of any accident. I am on Hydroxychloroquine and Benepali. I did have an issue with easy bruising ( and very slow healing) which started when I had a depo medrone jab. It continued for the 6 months I was on Methotrexate and continued for probably a year after I ceased it. For a good year my bruising has been normal.

I wonder if I should contact my clinical nurse as the bruising seems a little unusual. I am not due a review til late February.

Deniseelk
To view profiles and participate in discussions please or .
Read more about...
10 Replies
•
3 years ago

I use to get bruising when I first started methotrexate and every now and then they come for a visit. I mentioned it to a rheumatologist and he said if your bloods are ok there’s nothing to worry about. I would contact your clinic just incase

I get a lot of bruising too and don't remember banging, bumping into things. I think you will find a few of us on the forum do.

Looking at the replies you have had I see I am not alone. I get lots of bruise where I think where did that come. My arms are very often bruised because I have tissue like skin now thanks to the drugs. I can knock my arm and I get deep red blotches on them .xxxxx

Thanks Whaleroad that’s encouraging to hear and bearing in mind my body had reacted like this before.... I will wait and see.

I get them all the time on my arms. My rheumatologist said it's common in Ra patients. A combination of medications used and thinning skin as we get older I was told was the cause.

I get lots of bruises for no apparent reason. I have been told that steroids can do it and so can having RA. I usually get them on my legs and in fact, never have a time when there isn't some on my legs. I once had one that measures 6' x 4' and that one did worry me, but it just faded over the next few days.

Yes I too get lots of bruises and don't remember doing anything to cause them. Yours looks like the ones I get from knocking into the end of my bed, a line of bruise to the bigger bruise like you've scraped against something. I'm on the same meds as you.

I have tons of bruises, my dr said it's from nsaids

Have had random bruising,mainly on my legs for years.so eti seas a result of banging myself,some just appeared. Am on Myclophenate now and bruising has gone?my .egs look a lot better than they used to!

I agree with everyone. I get lots of bruising with no idea where they came from.

Does anyone else bruise very easily? I find that I have huge bruises, sometimes for unknown reasons...

I've had RA for 6 years now and manage it very well with meds, diet and exercise. However, in recent

throbbing and a bruise appeared. i haven't knocked my eye either because where the bruise is i...

Bruising at site of Metoject injection.

seem to have red bruising under my skin on the top of my right leg - the thigh area. Last time I...

wondering if anyone else with RA finds that they bruise very easily? These days I seem to only have...

Update re Giving up