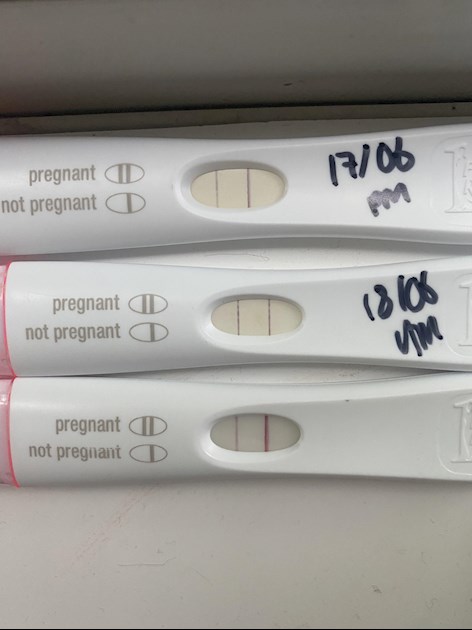 Hi everyone. I know I sound paranoid (which surprisingly I haven’t been until now) but since my missed miscarriage in March I am getting worried. I am feeling as I did back then, no symptoms other than slightly sore boobs, and cramping that comes and goes, like random twinges. I’ve tested (i know I shouldn’t) but my control line is darker than test line now. I’ve had no such thing as a dye stealer either, instead just looking rather faint. So I’m not actually sure what I am asking here. As I suppose any reassurance can still mean it’s not looking great like before 😓

Ps the bottom test was this morning 24/06 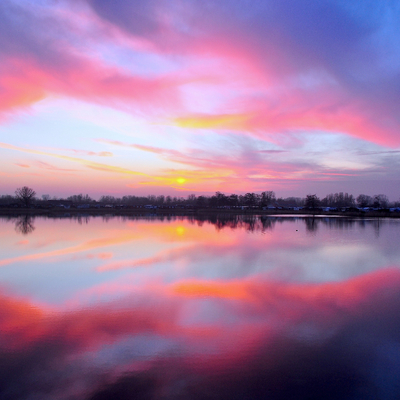 Hippy248
To view profiles and participate in discussions please or .
14 Replies
•

Have you tried using digital instead and seeing what they say? You could request blood tests with your gp if they would be willing x

Hippy248 in reply to HollyT7

The last time I took a digital was 2 weeks ago where it said 3+ weeks and a week before that also 3+. Should I do another one you think? I was thinking of doing one then thought it could still potentially say 3+ with something bad still happening ☹️ X

HollyT7 in reply to Hippy248

Hippy248 in reply to HollyT7

I’m sorry you’re so stressed, pregnancy after loss is really difficult 😞 Have you heard of the hook effect? I don’t know a huge amount about it but this was the reason I tried to stop testing this late. Look it up but the basics are that by now your HCG will be so high it will overwhelm the test and the test line starts looking paler. A bit like the opposite of a dye stealer I guess.

If you get a pale test line, dilute the same wee with water and test again - if it’s hook effect it should be darker from the diluted urine. But really only a scan or blood tests will put your mind at ease. Wishing you so much luck xx

I know it must be stressful after a loss, but genuinely the lack of symptoms doesn’t mean anything. I’ve had 3 healthy pregnancies and never had morning sickness. Your cramping is normal and is most likely round ligament pain- I had that, and sore boobs is normal. The only other symptom I had was bloating and tiredness. Have you been in touch to sort out maternity care yet? If not please do and discuss any worries you have with your midwife xx

Hippy248 in reply to Cheekymonkey85

Maybe try doing your test later in the day?! Sometimes too much HCG makes it lighter. It’s called the hook effect! I was the sand and tested so much, worrying about the line getting darker so I know how you feel but try thinking positive thoughts. You’ve got this💪🏼❤️Xx

Hippy248 in reply to Materialbarbie

Hi Lovely, yes I agree with Solly as this happened to me. The test becomes overwhelmed as your HCG is so high the test gets confused. Once I diluted with water 50/50 it evened it out but to be honest this was the reason I stopped testing after this as it gave me a big scare too xx

Oh it’s so hard in early pregnancy after a loss and particularly a missed miscarriage, it makes one really paranoid. I have been there too and I was testing compulsively.

The only thing that put my mind at ease was a scan. My local EPU were happy to offer me weekly scans until a heartbeat was detected, simply because I had a miscarriage previously.

Also agree about the HCG effect so late in pregnancy. The type of HCG produced is different now to that produced in early pregnancy, so there will be a point when you might actually have a bump, feel the baby kick and a pregnancy test would turn negative. It is now the time to stop testing.

If you can’t have a scan, a GP might be able to offer you a blood test instead to check your level of HCG is within normal range for this stage in pregnancy. That test will be able to detect the slightly different HCG that you are producing now.

had. The day I took my home pregnancy test I got sore boobs which got really swollen and tender but

7 weeks and no symptoms

Sometimes my breasts are sore if I slept all night on my stomach but other than that I've not been...

Three Clear Blue tests… one negative, one faint positive?, and one with no control line? I am only...

concerned that he may have stopped growing i keep looking at pics of my bump from say 2 weeks ago...

I'm 7 days late and no period. Too early to take a pregnancy test?

I'm 7 days late and no signs of my period my boobs are sore and I have been experiencing dizzyness...