I just wondered when you all first felt your babies move and if it became more and more consistent and obvious?!

I’m 22 weeks now with twins and I have felt a few little movements, usually in the evenings and at night but not every night and not very much! Apparently both the placentas are at the front which can provide a bit of a buffer but I was expecting to feel more frequent movements by now.

Each scan we’ve watched them wriggling about a lot while still not feeling anything so I’m not too worried at the moment, but I just wanted to hear your experiences and maybe get an idea of when i should expect to feel more. I’d love my husband to be able to feel them moving around too. 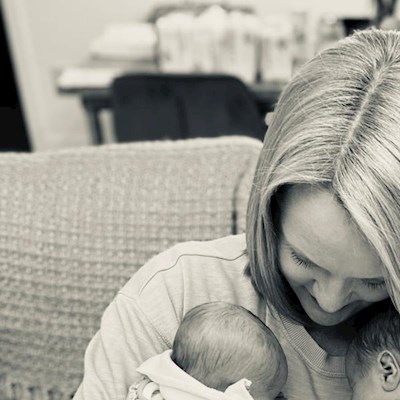 Franco81
To view profiles and participate in discussions please or .
9 Replies
•

Hey, I’m 24 weeks and like you my placenta is at the front. I felt movements more so after 23 weeks and they became more regular. I wouldn’t worry too much. I still get days where she’s not as active and the movement varies. At the moment it just feels like butterfly’s and air bubbles, not a kick as such xx

Franco81 in reply to Stephybivf

Ah that’s so reassuring, thank you for the reply xx

Stephybivf in reply to Franco81

And congrats on your twinnies ❤️❤️

Franco81 in reply to Stephybivf

Around 24 weeks. And then only really at night when lying on My right side. My placenta is at the front and down towards the right so I can only feel movements low down in the left side of my belly.

Now I am nearly 29 weeks and I can feel all sorts of movements at lots of times during the day, but still only really when i’m still. I still can’t feel much where the placenta is though!

My placenta is at the front too, and I was told baby is very deep and towards my back so takes longer to feel movement. I felt very light flutters from about 22 weeks. it does get stronger and more obvious over time so don’t worry. For me the feelings started low down, below the placenta, started out like little bubbles and got stronger to more like little thuds or big pops.

I’m now 31 weeks and can feel lots more, at the sides of my bump, low down and high up - but there’s always been a numb area at the front where I presume my placenta is. I can feel him pushing limbs against my tummy and sometimes can see lumps - which move along my skin 😂

Like some of the others have said, it’s more obvious when lying and relaxing. Though I have recently started feeling him when I’m at work and more active

I first felt my baby move at 19 weeks. It just felt like bubbles popping. Not long after that my partner could feel the movements and we could see my abdomen move slightly. The movements have gotten stronger week by week, and at almost 32 weeks I feel him moving more often than I don't — he is such a wriggler! Sometimes my whole abdomen shakes with his movements, and hard/bony bits often jut out! My placenta is posterior, which might be why I feel and see the movements so much. I'm also a very small person with an average sized baby, so there isn't a lot of room for him in there!

For me I never got the flutters, just really clear kick type feelings from about 17/18 weeks. However, my placenta is at the back so nothing blocking me from feeling anything. I found baby developed a pattern of movement that is basically the same every day from around 22 weeks. Huge congratulations on your twins x

I’m 25 weeks and like you I'm expecting twins and both my placentas are at the front.

I started feeling movements more frequently around week 22. But the kicks are still very gently, because the placenta buffers them. Sometimes they do a few kicks in a row and my husband is able to feel them too if he puts his hand on my belly.

I guess my twins don't have a routine.. they can be active at different times of the day. But they love sugar. So when I eat something really sweet I feel some kicks after.

A month ago I was really worried that I was not feeling them regularly, so I decided to buy a fetal doppler to hear their heartbeat at home whenever I want. It helped me reducing my stress levels.

When did you first feel baby move?

early. When did you first feel movement? Will I even know it is baby? I’m worried I might not...

When did you start to feel your baby move?

and congratulations to all you...

When should you start to feel your baby's first move?

so far I have not felt the baby's move yet.

When should i first feel the baby move?

When did everyone feel baby move for first time?

tomorrow and i dont think ive felt baby move yet, ive had occasional feelings and think it might of...

supposed to be feeling something this early? Surely not...

How early did you feel your baby move?...