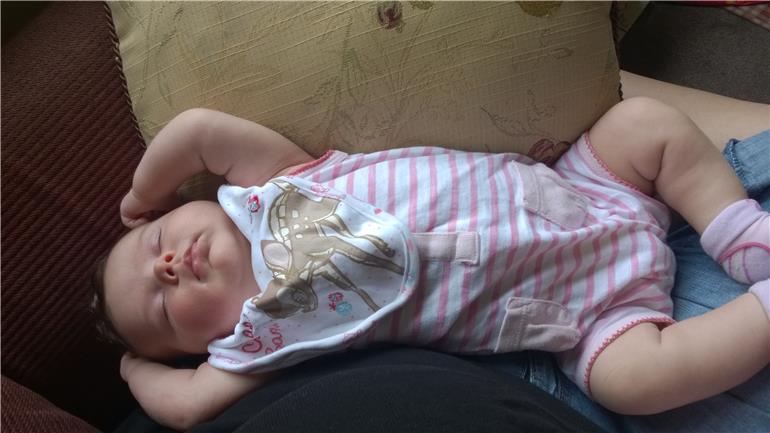 Hi lovely mummies and mummies to be!

Need advice on how to get Niamh to take a bottle. She's coming up 11 weeks now but has decided this last couple of weeks to not take a bottle! I gave her a bottle every evening before bed fine, right up to 8 weeks, then she got trapped wind so I stopped for a few days and now she is being really fussy and has only taken one bottle since.

Any help on how I can get her to take bottle as my boobs are getting bigger the more milk she needs and I'm already having physio for my back which was strained in labour. 🙈 I love breastfeeding her, but its getting increasingly harder.

LottyB
To view profiles and participate in discussions please or .
Read more about...
11 Replies
•

Oh dear I feel your pain, I bf number 1 and 3 for the longest as I couldn't ever get them to take a bottle. I tried all sorts of teats and different people feeding them but they were having none of it. I was told to preserve but to no avail. In the end I ended up feeding them till they were about 2. I will be feeding this one for a day or so then it will be bottle all the way for me. Good luck sweet xx

That is one bonus

I don't think there is one! I'm just clutching at straws. Haha. Xx

Do you use a dummy with her at all? It's not my own experience, but friends of mine have said that sucking a dummy gets them more used to taking a teat for a bottle, as they get used to the soothing from the dummy and can transfer that feeling to a bottle teat.

Worth a try maybe?! Like you said, clutching at straws a little bit, they are their own little people and at the end of the day will probably just do whatever they want to do, regardless of all the tricks we try!! Good luck!

My Isla had trouble taking the bottle, and by that I mean she flat refused it. She screamed whenever I (or anyone else) tried to give it to her. It was never my intention to stop breastfeeding, it was just for when I went back to work, which I have now.

I tried about 5 different brands of bottle without any luck. It was the bottle she didn't want, no matter what shape it was. To be honest I didn't blame her: when you can have the warmth and comfort of Mummy, why would she? I got really worried that she wouldn't take it when I went back to work.

But, one day, she just took it. I didn't do anything different, she was just ready and made the decision herself. Ever since she's been absolutely fine with it. I still breastfeed her but obviously she has the bottle when she's not with me.

Even though it's hard, I think it's so important not to put pressure on yourself or the baby. She'll do it when she's ready, just keep trying and one day she'll do it. I know it's difficult and I really feel for you.

I don't actually like bottles, and I now have her drinking from a cup at mealtimes, it's a much better habit and skill for them. Might be worth trying that, it's a but messy but once they've mastered it it's great. 'Babycup' are absolutely great, might be worth thinking about.

Could you express the extra milk and store it to give yourself some relief when you're really struggling? Not sure if you're planning on going back to work but it will come in handy then, even if you do need to keep it in the freezer for a while, or you could donate it.

She won't take a dummy either. I haven't tried much with dummies to be honest as I don't like them, but when ive been beside myself with tiredness have tried them in desperation and she's not interested. 🙈

I'm not putting any pressure on either of us, and im not trying it at the same time every day as I don't want her to get worked up thinking she's about to get a plastic funny tasting boob shoved in her mouth. Haha.

I'm sure once she's a little older and realises that it is still food, she'll take it. She needs to before December as im going to use my keeping in touch days from then so will be going to the childminder.

to my question. ..I hav expressed milk and tried to get him to take it tht way as obviously...

to accept a bottle? My little boy is 6 weeks old and I’m trying to get him to take a bottle of...

How to get a ebf to take a bottle?

and feed her from the bottle but having real trouble getting her to take the expressed milk she...

is 12 weeks today and she has been breastfed since birth. A few weeks ago she had expressed milk...

him with a bottle of expressed milk tonight and he had no interest in taking it. I know I probably...