Ventolin Vs Salamol: Hello everyone and... - Lung Conditions C...

Hello everyone and happy New year.

Has anyone else been swapped from Ventolin to Salamol? I understand that essentially they are same drug and leave less carbon footprint but is it as effective as Ventolin? 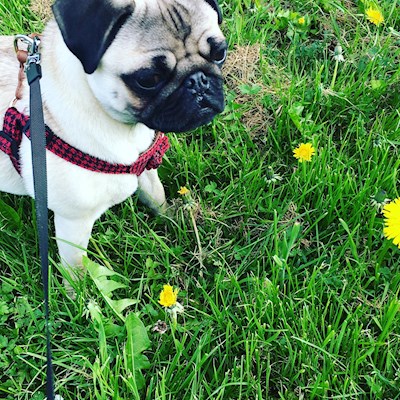 Janzo54
To view profiles and participate in discussions please or .
Read more about...
46 Replies
•

This question was raised recently. I personally don't find salamol to be as effective as ventolin and my GP has specified that my chemist supply ventolin.

I am the same

I was fortunate in that the GP who sorted this out for me uses ventolin herself and agreed that it is more effective for many than salamol. On odd occasions my chemist has delivered salamol but changed it when I've handed it back to the delivery driver.

I had to get my doctor to specify on my repeat prescription otherwise they sent Salamal! Xx

I'm on salamol and it works just as well as Ventolin. Have a good day and take Care😊 Bernadette and Jack 🐕 xxxxxx

Davegt in reply to Damon1864

👍Glad to be of help. Take care.

I don’t find any difference between the two. I prefer the size of the salamol…fits in my pocket easier

Patk1 in reply to Davegt

Davegt in reply to Patk1

So the moral òf the story is learn how to stroke. Lol 🤣

I was given the salbutamol and found it not so good but had to put up quite a fight to get ventolin again as the pharmacist said the same as you, perhaps as it’s lower in Co2 gas it’s less easy to use???????

I’ve used Salamol for a number of years now and didn’t realise there was any difference. I used to have Salbutamol and assumed Salamol was just a cheap rat brand.

I find Salamol ineffective and my GP specifies Ventolin. I believe although it is the same drug in each, the propellant is different and for some people the Salamol does not get as far down into the respiratory tract and is ineffective because of that. I always ended up using two or three times more Salamol than Ventolin for far less relief and it is a waste of money. On the other hand, my father finds Salamol works fine for him. We’re all different 😊

Fruitbat2 in reply to Bean_Counter

My husband has COPD and was prescribed Salamol which is useless. He has tried Ventolin and is so much better so thank you for posting about this.

Janzo54 in reply to Fruitbat2

Oh really, well im not sure Salamol is doing much for me either to be honest and I was changed without consultation so will have to make a telephone consult with GP I guess.Thanks for reply.

I never got on with the salamol inhaler, but switched to salbutamol dry powder....easyhaler...

I think all inhalers are cfc free now.

Thanks Carole I didnt know that x

If salamol isn't helping Irene, do let your doctor know. It definitely didn't help me xx

Will do Carole, thank you x

Janzo54 in reply to Izb1

Useful to know thank you the chemist said it was cheaper thats why they swop!

Ventolin is superior, the times they have tried to swap it with me. It is not as good, full stop!!

Janzo54 in reply to Suzie42

i was swopped over and didn't notice the difference.

Janzo54 in reply to Alberta56

Can you inhale it ok?

Alberta56 in reply to Janzo54

It looks exactly like a Ventolin and is inhaled in the same way.

Alberta56 in reply to Janzo54

I haven't noticed any difference, but now I've been alerted I shall watch out in case I'm getting less salbutamol into my lungs.

I found that I needed a lot more breath that I didn't have to inhale the salamol. I was using at least 5 or 6 times as many sprays, possibly more for no relief. I am now on Ventolin Accuhalers and am happy with them.

Thats interesting. I use a spacer but even so i have the same outcome as you-i dont feel i can inhale enough to make the difference!

Despite being told that salamol is the same as Ventolin I'm not convinced. Just as an aside, I was in Brighton recently and my friends in-laws were also there ( 80+ live in Yorkshire) He forgot his spray and went to the local pharmacy where they sold him a Ventolin inhaler for £7.50!

I found Ventolin works better, and my pharmacy has a file note to supply it.

I have definitely found that Ventolin gives much better relief. I am told it has a gas in it that makes it reach the lungs better. Superdrug pharmacy gives out Ventolin even if Salbutamol is on prescription, so I go to them. Ennabelle.

My meds go to a named Pharmacist so their hands are tied. Its a pain isnt it as if we all dont have enough to cope with without all this extra messing around!Janzo

I'm a recent inhaler user. Pharmacy issues me with Ivax Salamol which claims to deliver 200 doses. Not in my experience. I use once a day, occasionally twice. I kept a count for one inhaler which delivered 31 doses before drying up. My most recent one gave up after 9 days. I'm prescribed 2 at a time which should last me a year. I'm going through 1 a month roughly.Anyone else have an opinion on this?

Is the Ventolin delivery any better?

I’ve just joined this forum because my gp wants to change me onto salamol. I’ve had it before and when I had a bad asthma reaction to flu it didn’t help at all and it was really scary. I don’t know why it makes such a difference if the drug is the same, which it apparently is. It must be the propellants that make the difference. Ventolin does work for me.

I was previously also switched to one called something like folmerol, it was both brown and blue inhalers in one apparently. It gave me oral thrush which was stubborn to clear as I’m diabetic too and it loves a sweet environment. The nurse said it’s because it’s smaller particles that get caught on the tongue.

They now want me to only use qvar, and ventolin only rarely. I’m trying this and honestly I think the qvar is useless. Worse than useless, it makes my gums and tongue sore despite the spacer and cleaning my teeth straight after taking it. I feel like ventolin is the only thing that works.

I’m getting an asthma review because I don’t want them to switch me to salamol. I’m hoping the gp will listen- I just want ventolin, it’s the only thing that actually helps me. I don’t really want to try anything else as 3 months of oral thrush was no joke.

Hi there, I know its an absolute pain! I was switched from Ventolin to Salamol too without consultation. I think the later is less expensive and they say Salamol is longer acting? 🤷‍♀️I cant get anywhere with it all but seeing my GP for the first time in over 2.5yrs so maybe she will help me. Persevere with your GP its the only way I think!

So who went storm hunting last night what a powerful storm ...

My experience with covid