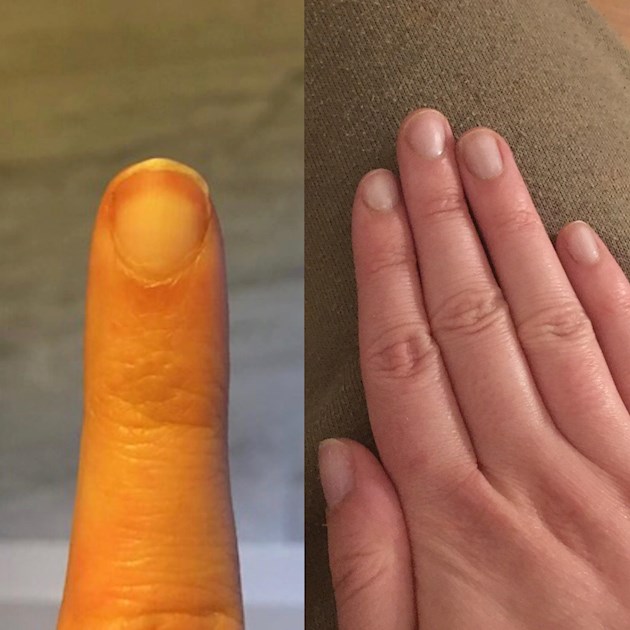 I'm wondering if anyone has experienced nail changes with PCOS/vegan diet.

My nails really bother me and trigger my health anxiety! I'm obsessively scanning and comparing them all of the time. It's exhausting!

I've had numerous tests over the past year including loads of blood tests (vitamins, hormones, thyroid etc.), a chest X-ray, an ECG and heart monitor etc. I'm currently waiting for some ultrasounds. Everything has come back normal although I do still suspect I might have a thyroid problem.

My nails have always been brittle and pale but they've become even worse in the past few years. They now resemble "Terry's Nails" which really freaks me out, haha. (Pale/grey/white with red bands across the top). The GP has told me that nails like this can be normal and don't necessarily indicate an underlying illness. It doesn't stop me from worrying though!

I went vegan in 2016 and I eat a healthy balanced diet full of good stuff! However, I have definitely noticed the nail changes since going vegan. I remember noticing my nails getting pale early on and they've just gradually become paler over time and developed the red bands across the top.

I understand that PCOS can interfere with protein absorption and so it's recommended to consume more protein than average. I'm wondering if I'm just not hitting my daily protein requirements. I'm going to invest in some protein powders to assist. I take inositol, multivitamins, B12, magnesium & zinc and omega 3s.

Can anyone shed more light on PCOS and protein absorption?

I'm vegan and have PCOS. When I first went vegan I tracked my intake on My Fitness Pal and found that I got more nutrients on a vegan diet than on a meat eating diet. I was also getting 150%+ of my recommended protein intake. I found protein was the one thing I would always exceed, as protein is in everything we eat and adds up.

The only supplement I take is B12 as this is only found in soil, which animals either eat or receive via supplements if kept inside. The only B12 I get from food is from marmite (as it's yeast) and this provides 100% of my daily recommendation. Days I don't have marmite I take a supplement. Everything else like omega, magnesium I get from cooking oil and nuts etc.

I'd recommend doing My Fitness Pal for a week to make sure you're getting everything you need. If you need more protein then there's lots of vegan protein options via shakes, lunches, snacks etc. My partner does weight lifting, so when we went vegan he switched his dairy protein shakes to Huel protein for lunch and a vegan protein shake.

I wasn't aware that PCOS impacts protein absorption, I found when I had the diagnosis they didn't provide any information and I've had to research risks etc. I don't have any issues with my nails so I'm unable to help with this - sorry.

That’s why I’m not sure if it is protein or not! I eat better since being vegan and my meals are full of protein but maybe I don’t eat enough.

An average day for me would be porridge, a chickpea flour omelet and some veggies and grains.

I’m just trying to get to the bottom of my nails so I can get them back to a healthy pink colour. My bloods always seem to be fine so it’s really odd.

I’ve read a lot of things about PCOS and protein, one particular source said “There is evidence to suggest increasing the amount of protein in the diet from 15% of calories to 30% or even more than 40% may be highly beneficial.” So I’m wondering if the protein I’m eating is even being absorbed fully, so I’m going to try and increase it.

I guess it’s all trial and error!

Thanks for your advice

I’m not vegan with PCOS and I have nails similar to yours, quite pale with some red banding at the top. They also used to be very brittle and peel a lot. One thing I found helped with the brittleness was CND Rescue Rxx Daily Keratin Treatment. I bought it on a whim after seeing it in an in flight magazine (remember flying?!) and it actually really helped. I would massage it into my nails and cuticles every evening before bed. I don’t use it anymore because my nails got much stronger during my pregnancies and thankfully haven’t gone back to being weak, so maybe there’s some hormonal element to it? The other thing I found helped with the brittleness was just leaving my nails well alone, no polish, no buffing, just clipping and a little filing round the edges.

I know a lot of people take Biotin to help with their nails although I haven’t tried this myself.

In terms of the pale colour and red banding, sorry no ideas on that one! Would be interested to know if you find an answer.

Hey fuzlo, I’ve only recently been diagnosed with PCOS and not a vegan, but around the same time I started noticing PCOS symptoms, certain nails on my hand had also started to going weird (like transparent dark lines, brittle tops of nails and the layer underneath peeling away) before I’ve always had great nails, so idk, but it maybe the hormone change, or maybe something else, please do let us know if u find the reason.

fuzlo in reply to Tonygirl

Hey! Sorry to hear about your nails. I’m hoping to talk to a naturopath/herbalist and I’m going to mention my nails. I discovered a lady who works in a clinic near me and she specialises in PCOS, endometriosis and menstrual health! I’m excited to have a consultation with her.

Is seeing a naturopath something you might look into?

I've got PCOS and eat a mainly plant-based diet (started maybe 6 months ago) and I developed nails like yours a few months ago too. I waited until last week to go to the doctor because I felt silly going just because of what my nails look like. I have no other symptoms apart from things related to my PCOS. The main reason I wanted to get them checked out is their appearance come shortly after I developed a really short luteal phase (only around 5 days). I'm trying to conceive and I just want everything to be ok.

I have been tracking my diet with Cronometer.com and I don't hit the protein target everyday, but on some days I do.

Anyway the doctor had me do a blood test for everything liver and kidney related, plus B12, iron, thyroid, protein (albumin I thing)... I'll get the results next week so I'll share them, maybe they could help you. I also take Inositol.

Do you track your cycles by any chance and have noticed changes ?

I do track my cycles and my periods have been crazy since the summer.

Before July my cycles were always 35 - 45 days and my periods were medium - light and lasted 5 days max.

After July I didn’t have a period until October, then December, then I started spotting in February which lasted 2 months, then I came on at the end of April. My period in April was unusually heavy, long and I had a lot of large clots. I was on for 15 days. A few days after that I developed vaginal discomfort that I still have. I came on my period again over the weekend and I’m on day 3.

I’ve had blood tests and a urine test which were apparently fine. I had a swab taken last week and am seeing a GP to discuss my issues. I’m hoping to get referred to gynaecology and have some pelvic ultrasounds.

I keep getting told this is all just PCOS but it’s unusual for me. I lost my job last July and had a nervous breakdown in November that lasted until January, so I’m hoping this is all just a reaction to stress and that my body is trying to regulate again. But I want to be sure. I’m really hoping I get somewhere with the doctor this week.

I’m also hoping to talk to a naturopath/herbalist. I discovered a lady who works in a clinic near me and she specialises in PCOS, endometriosis and menstrual health. She’s also vegan! I’m excited to have a consultation with her.

At the moment I’m feeling so anxious and fed up with everything that’s going on.

I hope you’re okay and get to the bottom of your issues!

Hey ! So sorry to hear about your mental health struggles. I think this would definitely have an impact on your cycles. Hopefully you can get some answers from a gynaecologist.

You said you still suspect you have a thyroid issue. Apparently even that normal TSH is between .5-4.5, a level higher than 2 is not ideal. So maybe you have subclinical hypothyroidism ? Not a professional opinion just a thought.

It's strange to say but it would be a relief to actually be diagnosed with a deficiency or hypothyroidism... better that than forever wondering why my nails have changed. I mean, just why ?

Here is a photo by the way

showed PCOS. But all in all I count my PCOS symptoms as fairly minor. I've started a low GI diet...

finally confirmed, and I've been diagnosed with PCOS at 31 years old.

I understand there is no cure

now as my bloods were normal ( just glicose thyroid etc, no specific insulin resistence or hormone...

very thick hair - while I'm lucky enough that it doesn't grow on my face etc, it can be very...

Pcos and clomid and metformin together

Anyone got told just to have bloods done and no ultrasound, ...

Finished norethisterone today after been on it for 1 year 6 ...