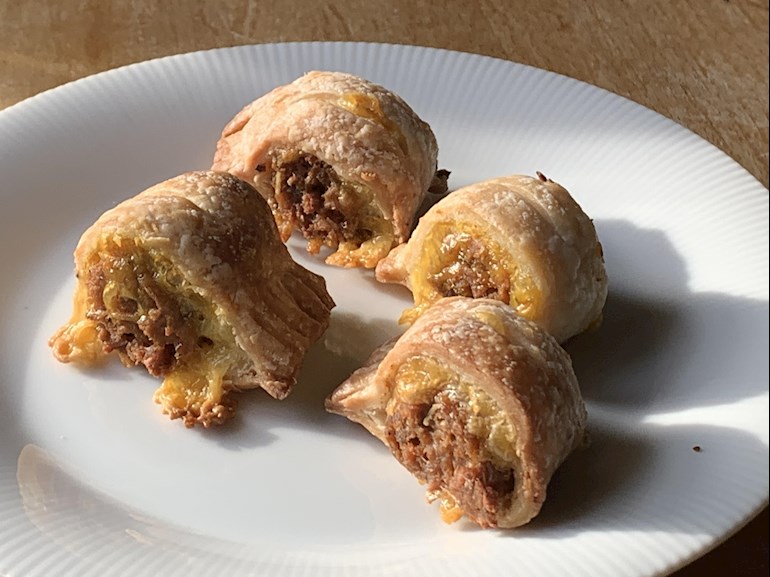 My gluten free vegan neighbour and friend came round this afternoon bearing gifts of home grown salad veg and home made gluten free sausage rolls, I’ve just had them with salad with chips as I like chips with a salad sometimes.

I don’t have the recipe but it shows what can be made, the sausage meat is from plant based sausages and the gf pastry is Jus rol gf and vegan pastry with plant based cheese and gf mustard.

They were very nice indeed and I enjoyed them a lot especially as they were a surprise gift.

It’s lovely with neighbours sharing their harvests as well so there’s lots of things to like about the Autumn. 🌞

I hope that you enjoy the rest of your weekend folks.

What a good neighbour you have. Those sausage rolls look great. I love sausage rolls! I either make them with veggie sausages and frozen puff pastry, or make sausages with Sos Mix or similar and make a giant sausage and then plait a sheet of frozen pastry to make a lattice and slice it up. That is a sharing thing and not something I eat entirely to myself (though I’m sure I could!)

Thank you HungryHufflepuff I appreciate having good neighbours. Your sausage rolls sound delicious so I shall have to try making some now. 😊

Wow! they look very nice indeed Jerry, what lovely neighbours you have - if you ever want to swap just let me know 😁 They look so tastey

That was very politely put 😁😁

Wow those look so delicious Jerry and that inspires me to make some gluten free, Vegan Pâté Chaud. 😁Great neighbor you have Jerry, enjoy these goodness treat! 😋👍

Hey thanks Koko and I’m sure that your vegan pate chaud will be delicious, it’s great how we all inspire one another as I know that you inspire us. 👍😁

I used to work in a bakery years ago and a chap who worked in the bookshop nearby would always have sausage roll and a doughnut every day.

And why not catgirl. 😊

After a while I would ask him is it the usual again and yes it would be!

When I worked at the university in catering there there was a girl who was vegetarian who would always have beans on toast and after a while I would ask is it beans on toast again and I had put in a request to chef about more choice for vegetarians.

yes that was the way when I was growing up back in the 90s and then they had quorn which I tried at a bonfire night BBQ instead of the usual burgers just to see what it was like and it reminded me of chicken!

I make my sausage rolls with jus roll puff pastry and Linda McCartney sausages for an...

and made these earlier today using some marmalade, which is made using a traditional French recipe...

Since I’m gluten-free vegan diet and I love Nutella very much so I made my own homemade...

This is the vicious cycle of poor health and climate crisis ...

Happy Weekend Everyone: Hope this story can bring smiles to ...