Anyone else had problems with Medichecks? - Thyroid UK 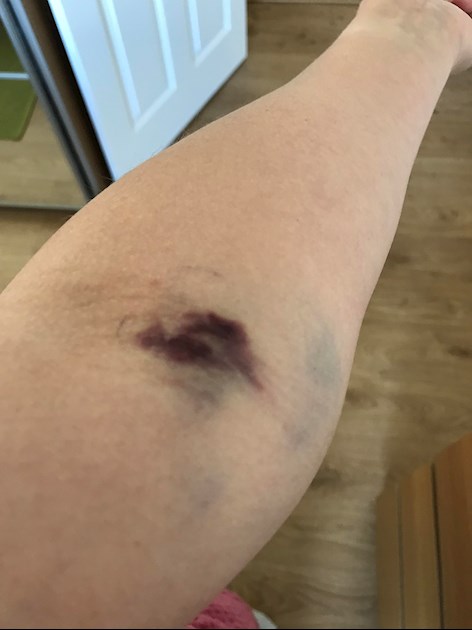 Hi all - has anyone else had issues using Medichecks? I’ve done a quick search on the forum and it looks like it might just be me! Their testing kits are fine, as is their online system where you get your results, but I find their customer services appalling. A couple of people I’ve spoken to have been helpful, but all other times I’ve received conflicting and inconsistent advice. And part of the reason why I have been speaking to them so much is that I’ve also had to chase most of my queries! Basically I get the sense that they’re just not that bothered.... Anyone else encountered this, or have I just been unlucky?

I also wouldn’t recommend anyone using the Medical Express Clinic, who they partner with in London - I’ve now had my blood drawn there twice and both times have ended up with a very bruised arm (see pic). I’ve told them about it, but again, they don’t seem to care...

I think I’ll switch to using Blue Horizons, even though they tend to be more expensive. But if anyone else has any thoughts, please let me know.

bell22
To view profiles and participate in discussions please or .
22 Replies
•

I have always found them very helpful.

bell22 in reply to bantam12

It really might just be me then! Either I’m very unlucky or maybe unreasonable/expect too much!

SlowDragonAdministrator in reply to bell22

Some medical conditions mean we can bruise very easily

Adrenal issues and low vitamin C are both possible reasons

bell22 in reply to SlowDragon

Thanks SlowDragon but that’s not it in my case - I have my blood drawn a lot and I’ve never had so much bruising. It’s made me realise what a skill phlebotomy really is!

Saggyuk in reply to bell22

I've never had a problem with medichecks customer service - they've always gone out their way to answer any questions I have or change something and always call back to say it's been done so maybe you were just unlucky as I've always been extremely impressed?

In regards to phlebotomy, yes many are unskilled which is why i stopped using the GP practice nurses after one took 1.5 hours for one measly vial, was bruised all over and she tried to blame my veins. Most blood test takers say my veins are beautiful lol! This would be fault of the place you went to though rather than medichecks. I get mine done at the local nhs phlebotomy unit at a hospital and pay them £10 directly rather than the £25 through medichecks. They do blood tests all day every day so never had a problem there so maybe ring round

bell22 in reply to Saggyuk

Thanks, that’s a helpful tip re phlebotomy, not sure why I never considered that option! I work in London so it seemed more straight forward to pop into a Medichecks clinic, but I’ll look into what you suggest closer to where I live. And re their customer service, I guess I shouldn’t dwell on it too much, especially since it doesn’t seem to be a common occurrence. Thanks

I wholeheartedly agree that it is a matter of their skill.

Always seems to me that the ones who allow the needle to waggle around after being inserted are the ones who cause bruising. Need to make the needle enter the vein, then carefully hold the needle thing, and pop the vacutainer in. That switch between pushing needle in and supporting is critical.

I did a Blue Horizon test last year. Having failed miserably with the finger-prick option I did ask at my local hospital if I could pay for them to do the blood draw. I was treated with much suspicion, and told I would have to have a letter from my GP requesting this, so I didn't bother! Went to a private hospital instead.

Odd hospital - I had tests for both providers done at my local NHS hospital. They do have a private wing which is probably why they weren't bothered about me giving them a kit.

Saggyuk in reply to bell22

researcherUK in reply to bell22

No, it is not you, Bell, and you are/have not been unreasonable.

I used to give blood and even though my veins are deep the nurses never had a real problem. One day a doctor did it and what a mess he made of it! The needle kept popping out and he only managed to get half a pint. I was also badly bruised. I think it's just a matter of luck. x

Used blue horizon was most impressed with the service, paid extra for the nurse to come to the house, she was excellent no problems taking blood sample, would use them again, just waiting on results.

I've PM'd bell22 about a London lab workaround and if anyone would like that information, please PM me.

Medichecks do not charge more for the high-sensitivity test. In fact, they currently offer it as a stand alone test for £39, whilst Blue Horizons charge £49 for the standard CRP. Blue Horizons currently have the Thyroid Check Plus 11 (including standard CRP) for £99.15. The comparable test with Medichecks is the Thyroid Check UltraVit for £99, and includes high-sensitivity C-reactive protein.

bell22 in reply to wellness1

I have used them in the past and did not have any problems. They did have to get another nurse to do the blood draw as I have difficult veins, but there was no bruising.

bell22 in reply to elderflower2016

Thanks elderflower. Was this at Medical Express Clinic in London or somewhere else?

elderflower2016 in reply to bell22

It was at the Medical Express Clinic.

Hi, you can often avoid bruising if you apply pressure to.the site after the blood has been drawn. A good nurse often gives you a cotton ball to hold against the site to avoid infection.

All too often I just seen a plaster just stuck on. One old school nurse used to yell keep you that pressure on or you'll get a bruise and make me look bad.

I presume its also why they wrap you up like an Egyption mummy after giving blood.

I recently had my results interpreted incorrectly, when questioned I received an apology as the Dr had missed the decimal point. If I had no knowledge enough to question, this could have been quite dangerous.

However, after amending his mistake suggested I was over medicated with a TSH at the exact bottom of the scale (low) and FT4 and FT3 both well below the low reference point. I noted that it was a general practitioner.

Training to be a phlebotomist is a one day course. The girl who takes mine at the Drs is amazing - no marking; whereas the Dr is terrible. When he does it, it hurts like crazy and marks similar to yours.

I find Blue Horizon better. Medichecks take longer to report so nowadays I just say that I don’t want a Drs opinion - just send the results through and that speeds up the process. Best posting your results on here where the REAL experts are.

Anyone else having problem with site?

Edit, nothing happens. Using FireFox. I have emailed Support twice. Anyone else, or is it just me?

Has anyone else had a problem with Thiroyd?

Levythyroxine which seems to be working fine. Anyone else found thiroyd ineffectual?

Anyone else had this?

occasional sharp pain shooting inside head up to skull. Been on Livial since last Nov, finished 6...

Is anyone else having problems on Actavis

Having been on this for a few days now, I’m feeling terrible. I have palpitations (never had those...

Does anyone else have a fluid retention problem?

retention. What I would like to ask is; has anyone else had this kind of retention and then had it...

Hilary Mantel’s thyroid disorder not mentioned by the press ...