The Normal TSH Reference Range: What Has Change... - Thyroid UK 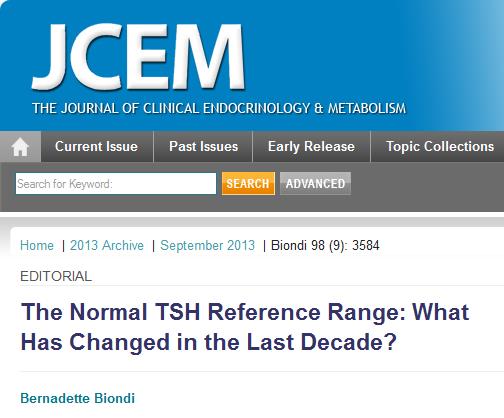 This fairly short paper covers much of the ground with which many are familiar.

I had been going to post some quotes but as it is so short, I'd have ended up quoting most of it! So follow the link and have a read:

The Normal TSH Reference Range: What Has Changed in the Last Decade?

Rod , nice find, this is mentioned and also available. "A Review of the Clinical Consequences of Variation in

Thyroid Function Within the Reference Range"

Although there is more discussion about variation within the reference range most doctors still seem to regard the reference range as equal to the patient reference range, and that it is absolute and infallible, neither of which is true. The other question that comes to mind is the validity of the TFTs used in all these studies.

Now that I've has some time to consider the 'Standardizing of the Thyroid Function Tests' I wonder if we will be right back where we are now with doctors believing that the tests are absolute and infallible and treating the lab test instead of the patient. PR

That paper is also very interesting.

One of the statements that had me somewhat shocked was this:

According to the 2012 AACE and ATA cosponsored guidelines, if the upper and lower limits of normal for a third-generation TSH assay are not available, an upper limit of 4.12 mIU/L and a lower limit of 0.45 mIU/L should be considered in iodine-sufficient areas

Well, it would have shocked me ten or more years ago!

How can you have a valid, reliable TSH test result but not have the reference ranges available? What the hell is going on?

You are, of course, quite right about the reliability of the thyroid hormone testing.

"Serum TSH assessment is the most sensitive screening test for the diagnosis of thyroid dysfunction in the absence of pituitary or hypothalamic disease. This test has been used increasingly in the last decade to detect subclinical thyroid dysfunction (STD). Recent data suggest that STD is a common disorder that may be associated with important adverse events "

This is one of my bugbears. If subclinical hypothyroidism may be associated with important adverse events, then surely, the hypothryoidism is NOT subclinical. It appears that the word "subclinical" has a special meaning in the case of hypothyroidism that it doesn't have in other diseases and that is just absurd. It's just playing with language!

Look at the definitions of the meaning on this page :

Sequence of events (from the point of view of the patient)

3) Patient says "But I have lots of symptoms, it isn't subclinical".

4) Doctor "I repeat, your TSH hasn't yet reached 10, so your symptoms are of no relevance and are not caused by hypothyroidism. Here, take this prescription for anti-depressants and statins and don't darken my door again."

I've never worked out where the magic figure of 10 actually comes from. Did some doctor have a bad day and just pluck it out of thin air?

tegz in reply to humanbean

The '10' is where the GPs are too ashamed/worried not to treat as we know it's 3 times the level allowed in other advanced countries.

We are just not that advanced...

You have to find a good GP who cares/knows a moderate amount about UAT, get bloods past the gestapo in local NHS hospital lab [or go private] and then push for an endo on the friendly list to get proper treatment.

Patience under duress it's true!

[I have managed appt.in Bristol at last with a TSH of 2.2 after stopping Levo -so Adrenals suspect]

humanbean in reply to tegz

But it isn't just British doctors who use the figure of 10 to differentiate between subclinical and overt hypothyroidism. The difference between British and other doctors, as far as I can tell, is the willingness (or should I say the lack of it) to treat subclinical hypothryoidism. In Sweden (so I've read, anecdotally, on the web), doctors are willing to treat subcinical hypothyroidism when TSH goes above 2.5. But, as far as I know, the Swedes still call such a condition "subclinical" rather than "overt" hypothyroidism.

So, there still seems to be some magic attached to the figure 10, that I have never seen the source of.

I have wondered whether the TSH of 10 coincides roughly with T4 and T3 dropping below the reference ranges for people with uncomplicated hypothyroidism with no vitamin or mineral deficiencies or adrenal problems, no sex hormone imbalances, a perfectly working pituitary, and a perfectly healthy hypothalamus.

But for everyone else in the real world the number of 10 seems to have been randomly decided upon as an artificial way of dividing people up into two halves - the hypothyroid and the not-hypothyroid. And we all know how often that leads to disaster.

Edit : I'm self-medicating by the way. I've given up on the NHS in connection with my thyroid problems.

tegz in reply to humanbean

What I was saying was there is NO reason other than convention for using 10 and then ignoring the other factors that the guidelines mention to consider. [Pituitary etc].

This convention is based on using sick people in the 'normal' assay for the TSH range and then using a number that can't possibly be due to accident.

By then people can be rather ill- and usually are.

Then the 'Magic' of Levo can be wheeled out to make marginal improvements that suffice as adequate treatment for most.

Shoddy- but all too prevalent in the NHS.

The high Max TSH keeps them out of litigation, probably- in the final analysis.

beaton in reply to humanbean

helvellaAdministrator in reply to humanbean

As I understand, there was a reason for using the number 10. Some years ago the TSH numbers were generally higher - very likely due to interference of some sort. While TSH testing has improved in the sense of being more specific and less likely to be affected by other factors, many doctors appear to be relying on documents which are stuck in the past. As ever.

I also have long wondered where '10' came from, Bo Derek perhaps. The only thing I can figure out, it is a left over vestige from some of the first generation tests where ten was the top of their 'reference range'. It also pops up in the USA. This is from the 2012 guidelines from AACE and ATA: "The decision to treat subclinical hypothyroidism when the serum thyrotropin is less than 10 mIU/L should be tailored to the individual patient." PR

It is the thought that my thyroid could be rendered under active and end up with me feeling really ill yet still be somewhere 'within the range', that makes me not want to go down the RAI route should stopping B&R not work. Depressing huh!

You have one major asset - you know that TSH is inadequate for assessing treatment.

Fruitandnutcase in reply to helvella

Do you mean that the asset is that I know using TSH to tell you anything is inadequate?

Knowing that 'they' use TSH to decide how you are feeling (!) and to decide how much levo you will be on etc worries me somewhat considering I am being encouraged down the RAI route without ever having had my T3 measured!

It might happen this time, it is on the request form but it has been on in the past and never done so I would be amazed if it is done this time.

Certainly I agree that it is very, very far from ideal. It is one step better than believing a doctor saying as above must be right "Because he's a doctor."

Please don't take this as in any way advising what to do - just trying to point out that knowledge is power and it is far better having knowledge than being ignorant and trusting.

Fruitandnutcase in reply to helvella

Know exactly what you mean Rod and thank you. You are right knowledge is power and I have had a lot of different TSH reading and know which one I feel well with.

Methinks knowledge not only gives you power but makes you stroppy too.

TSH Reference Ranges in the USA

manufacturers and labs. All too many papers seem to assume standardised reference ranges (at least...

Does this mean I know fall into the range...

So, off to the GP later. TSH pretty much been up and down like a yo-yo since diagnosis in Jan 15....

Is the TSH normal range even representative?

creates its “normal” range based on test results from sick people, is that really a normal range?...

Why do labs change reference ranges...?

I have noticed two changes in the past ten years:

the reference ranges for TSH have gone from...

Hashimotos, in range. Should I take 25mcg Levoxyl?

Thyroid dysfunction and the very elderly