What are e-cigarettes?: E-cigarettes are known... - Quit Support 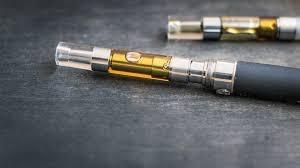 E-cigarettes are available in many shapes and sizes. They can look like cigarettes, cigars, pipes, pens, USB flash drives, or may be in other forms.

E-cigarettes include a battery that turns the device on, a heating element that heats the e-liquid and turns it into an aerosol of tiny particles (sometimes called a “vapor”), a cartridge or tank that holds the e-liquid, and a mouthpiece or opening used to inhale the aerosol.

E-cigarettes do not contain tobacco, but many of them contain nicotine, which comes from tobacco. Because of this, the Food and Drug Administration (FDA) classifies them as "tobacco products."

The use of e-cigarettes is often referred to as “vaping” because many people believe e-cigarettes create a vapor, which is then inhaled. But in fact, e-cigarettes produce an aerosol made up of tiny particles, which is different from a vapor.

How do e-cigarettes work?

E-cigarettes heat a liquid – called e-liquid or e-juice – to turn it into an aerosol (sometimes called a "vapor"). E-cigarette users inhale this into their lungs.

The e-liquid in most e-cigarettes contains nicotine, the same addictive drug that is in regular cigarettes, cigars, hookah, and other tobacco products. However, nicotine levels are not the same in all types of e-cigarettes, and sometimes product labels do not list the true nicotine content.

There are some e-cigarette brands that claim to be nicotine-free but have been found to contain nicotine.

What is in the aerosol ("vapor") of an e-cigarette?

Although the term “vapor” may sound harmless, the aerosol that comes out of an e-cigarette is not water vapor and can be harmful. The aerosol from an e-cigarette can contain nicotine and other substances that are addictive and can cause lung disease, heart disease, and cancer.

Again, it is important to know that most e-cigarettes contain nicotine. There is evidence that nicotine harms the brain development of teenagers. If used during pregnancy, nicotine may also cause premature births and low birthweight babies.

Besides nicotine, e-cigarettes and e-cigarette vapor typically contain propylene glycol and/or vegetable glycerin. These are substances used to produce stage or theatrical fog which have been found to increase lung and airway irritation after concentrated exposure.

In addition, e-cigarettes and e-cigarette vapor may contain the chemicals or substances listed below.

• Volatile organic compounds (VOCs): At certain levels, VOCs can cause eye, nose and throat irritation, headaches and nausea, and can damage the liver, kidney and nervous system.

• Flavoring chemicals: Some flavorings are more toxic than others. Studies have shown that some flavors contain different levels of a chemical called diacetyl that has been linked to a serious lung disease called bronchiolitis obliterans.

• Formaldehyde: This is a cancer-causing substance that may form if e-liquid overheats or not enough liquid is reaching the heating element (known as a “dry-puff”).

The FDA does not currently require testing of all the substances in e-cigarettes to ensure they are safe. It's also hard to know exactly what chemicals are in an e-cigarette because most products do not list all of the harmful or potentially harmful substances contained in them. Some products are also labeled incorrectly.

It's important to know the US Centers for Disease Control and Prevention (CDC) has stated that sometimes e-cigarette products are changed or modified and can have possibly harmful or illegal substances from unknown sources.

What are the health effects of e-cigarettes?

No youth, including middle schoolers and high schoolers, should use e-cigarettes or any tobacco product. (See "What is in the aerosol (“vapor”) of an e-cigarette?")

It is important to know that most e-cigarettes contain addictive nicotine. There is evidence that nicotine harms the brain development of teenagers.

Some studies have shown that vaping by some youth may be linked to later use of regular cigarettes and other tobacco products. Using e-cigarettes may play a part in some kids or teens wanting to use other, more harmful tobacco products.

jillygirl
Administrator
To view profiles and participate in discussions please or .
Read more about...
1 Reply
•

I vaped for 3 years then went back to smoking, I had loads of painful mouth ulcers and there’s something in e cigarettes that hinders healing, a week back smoking and my mouth healed, but it’s even better now i don’t smoke or vape

was thinking I might buy an E- Cigarette so that if I'm tempted I can use that instead. Does...

I have put down cigarettes and picked up vaping to help the quitting process. I'm going so strong!...

Getting close to having a cigarette

Normally I would've had a cigarette.

because I'm starting to realise that for me the nicotine monster has had its day.To any newbie...