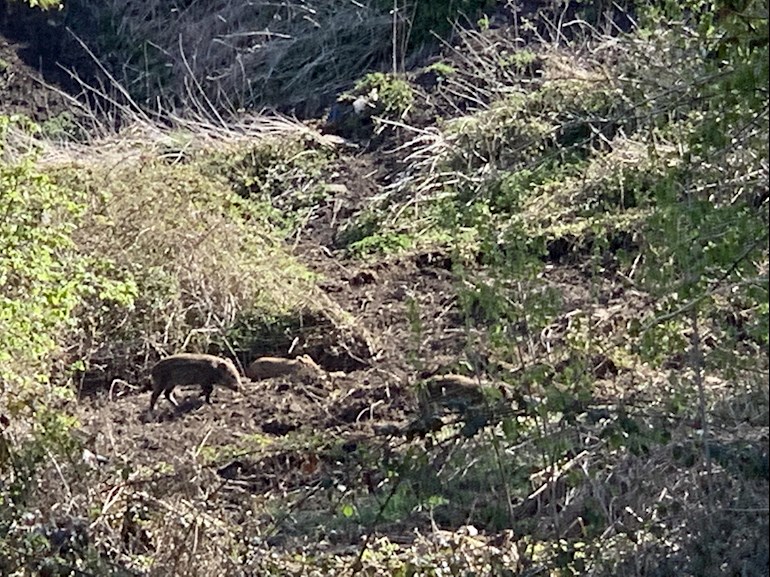 Near where I live are 3 families of boars and there's a big male so its become very surreal as they hang around near the foot paths.

They're boring because they are intelligent animals and are feared by hunters and they get bored with me trying to sneak up on them so now they let me know they're there and stand firm so I can't follow them. I saw them all yesterday and they went off into the thicket except one mamma stood guard so I couldn't follow them!

Then just around the corner there was a loud grunt and the male boar was looking at me from above so I had no chance of sneaking up on him.

This morning I photographed these three baby boar and thought why has their mum left them as they'd already seen me, then I turned to see mamma on the path behind me keeping an eye on. me. they soon let you know that they are one trotter ahead of anyone who wants too follow them but they fascinate me and I've wanted to photo the little ones and they are seriously cute. 🐗

I know I've said it before but rather you than me! 😁

springcross in reply to Jerry

Very well captured Jerry and I'm so pleased you saw them. I do think it's good they stand firm as us humans know who's boss and find it difficult to hunt them.

I love seeing baby animals this time of year and Wild Boars are something completely different unlike sheep or cows.

Take care and enjoy the rest of your day.

Thanks Alicia here's a photo of mum blocking the path looking right at me so an understanding has been reached...I don't follow them LOL...🌈😀

OMG Jerry you need to be carefull 😂many take some shortbread 😂😁😻

You take the biscuit Mandy,..😁

Awe thanks Zest the mums have unusual markings on their faces here's another of the mums with a lot of silver on her face. 😊

I sense you are not fearful of the boars Jerry but you obviously respect them and keep your distance. They used to be part and parcel of the British countryside for hundreds of years until they were hunted down without mercy. I believe they hav, been re-introduced to some woodland areas throughout the country. It saddens me to see so much of animal natural habitat being taken up more and more with new house building. I really feel we humans have to learn to live side by side with the animal world once again.Cheers.

JerryAdministrator in reply to RoadRunner44

Hey I agree and I am fearful of them but fascinated this big male was asleep 2 deer ran past him and he wasn't fazed by them then I appeared so I know he's not aggressive. Here he is yesterday just above me keeping an eye on me...🐗

Male boar keeping an eye on his neighbour.

RoadRunner44 in reply to Jerry

I love watching animals and could spend hours just sitting and watching them go about their business. Better than TV any day. Speaking of which...Are you watching the last episode of Line of Duty tonight?

JerryAdministrator in reply to RoadRunner44

Sorry no I’ve not watched it first time around. But I do like spending time just sitting on a fallen log watching the wildlife and listening to the birds. 😊

The youngsters are very cute, Jerry. Thank you for posting the photograph and well done for your perseverance! You are very brave to follow them 🐗

JerryAdministrator in reply to Dovedale4

Thank you Dovedale4 and I don't think its brave its trusting our judgment as they scare me when I don't realise how close by they are. 🐗

Lovely photos Jerry. What an amazing experience for you. Very different from those of us living in towns😁

Thanks MadBunny I only moved here from the city just over a couple of years ago so it’s all quite new to me. 😊

Definitely amazing experience to be so close to them. Will be following the family saga!

I don’t think they’ll let me get any closer and will move on soon when the forest is greener.

So it’s nice now but I do wonder who is watching who as they’re not fazed by me and I see them in the shadows watching me it’s very odd, this was this morning. 🐗

Mamma boar keep an eye out.

waitingame7 in reply to Jerry

Great to watch them watching you!

it is unnerving when you don't realise they are so close. 🐗

Lol I luv him.so much even tho he's a nightmare at times 😻😁

Really jealous of you, Jerry, keep the pictures coming, the only bores we have around here are politicians!🥴🥴

JerryAdministrator in reply to Adlon57

Hey thanks long may they stay so near as I really like it. 😊 🐗

Adlon57 in reply to Jerry

Jerry, used to be visited by foxes, solar garden lights saw the last of those? Nice to see something really unusual like Boars, obviously because of the lack of 'humans' are able to become your neighbours if only for a short visit! Although they seem to be taking over down there?😆👍👍

JerryAdministrator in reply to Adlon57

I used to see foxes in the city sometimes and the reason the boars are so close to town is they’ve been culling them and they know they are much safer on the edge of town than in the forest. 🐗 😊

Such an awesome picture. I’d be so excited if I saw animals. It’s impressive you live near them. 👍🏽😊

get to the forest and he hasn't seen one yet.

The boars breed near me and I took this photo last...

I met Mr Boar again today I met him yesterday briefly as he's shy but today he had his...

Well, I see Bojo & carrie have named their little one Wifred Lawrie Nicholas Johnson, I would still...

For Catrick my outdoor baby

We celebrate our being just like this little guy....dancing ...